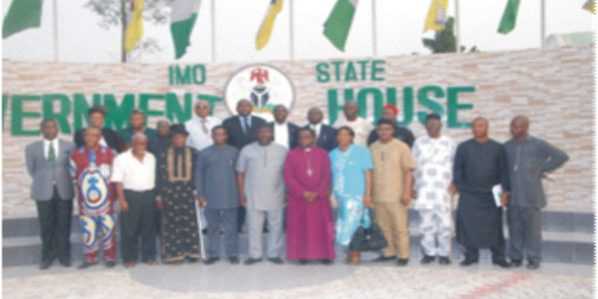 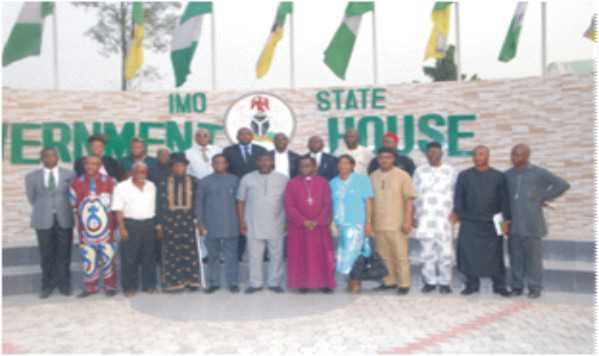 The chances of Imo state governor, Owelle Rochas Okorocha grabbing an elective position at the national level is witnessing difficulties following the controversy that has trailed the purported plan of the state government to issue people from the Northern part ofNigeria “special identification tags” in Imo.
Governor Okorocha from political permutation is said to be partly warning up for the national office of either president or vice president. It was learnt that in the event of a person from the North picking the presidential ticket of his party, the All Progressive Congress, APC for 2015 election, Okorocha who is from the South East is likely to be tipped for the Vice-Presidential position.

Trumpeta learnt that part of the forces that prompted Okorocha dump APGA which gave him the channel to gain governorship position, for APC was to seek national office like presidency and Vice Presidency.
Apart from making certain public statements indicating that he is interested in the national office, the Imo state governor was said to be a part of the behind-the-scene political manoevering that led to the emergence of APC National chairman, Chief John Odigie-Oyegun who is from the South South zone against Chief Ogbonnaaya Onu tipped to have the position from South East zone.
While still undecided on his 2015 political destination, the future seems to be bleak for Okorocha’s quest for a national office in view of the backlash he is receiving at the national Level from the Northerners and within APC camp over the accusation of attempting to adopt segregative approach for identifications of Northerners in Imo state.
The governor was reported to have made the intention known during the recent public security meeting held at the international conference Centre, ICC Owerri, after the Bomb scare at Winners Chapel, Owerri. No sooner than the event ended than it received tackles from Northerners propelled by the Senate Minority leader who condemned the action.
Even as the Imo state government through the Senior Special Assistant, SSA, media Sam Onwuemedo debunked the reports claiming there was no plans to embark on such policy, the Senate took a swipe on the governor. irrespective of party positions. Senators who spoke during plenary not only lambasted the governor but also urged him to rescind the decision since it runs contrary to the Nigerian constitution.
However, the belief in Imo state government quarters that the opposition PDP could have masterminded the orchestrated campaign against Okorocha over the ID card saga received a knock when APC joined the fray to condemn the governor who is the chairman of APC governor’s forum. The sad tunes from APC is another dangerous signal that Okorocha has entered the party’s bad books and may not be considered an acceptable candidate for the proposed vice-presidential ticket position.
In a statement by South East zonal spokesperson of APC, Osita Okechukwu it warned Okorocha that introduction of such measure may result in the situation where Ndigbo, residing in other parts of Nigeria would be forced to carry identity cards and would be subjected to screening.
However, the opposition party maintained that an attempt to segregate Nigerians like in fascist Germany in 1930th-40th, would be the greatest disservice to Nigeria adding that Boko Haram would only benefit from such actions aimed at division and separation within the society. APC emphasized that stability, unity and harmonious relationship of Nigerian citizens is paramount and fundamental.
Trumpeta learnt in Abuja office of the APC, that despite denials from the Imo state government that nothing of such is taking place, the image of the governor has lowered before party hierarchy who not only condemned the idea but also took the matter to the highest legislative body for observation.
It was further gathered that the image and integrity of Okorocha has been severed and battered before his party leaders who are said to have met recently to review the alleged comments bothering on national unity and security.
A top official of the party (names withheld) who spoke to our correspondent in Abuja noted that the ID card saga has raised doubts over the chances of Okorocha picking any national position adding that it has compounded image problems bedeviling the political career of the governor.
Furthermore, Trumpeta gathered that APC leaders in the Northern block disposed to having Okorocha pair with a Hausa/Fulani presidential candidate as Vice president are having a rethink since the special ID card project for Northerners in Imo dominated discussion in the Northern parts of the country since last week.