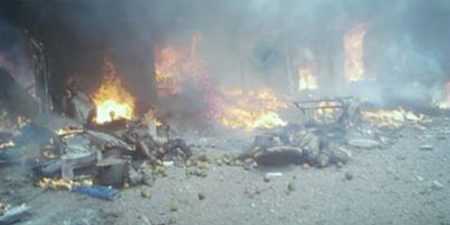 No fewer than 40 people were last night killed in a bomb blast at a football field in Mubi, Adamawa State. French News Agency AFP reported the death toll, citing a police source.

“There has been a bomb explosion at a football field this evening and so far more than 40 people have been killed,” an officer in the town said.

The bomber struck the town of Mubi in the evening, said Emmanuel Akinyele, a church pastor.

A military source said several bodies had been recovered, adding that the dead and wounded were still being evacuated from the area.

A military source told Reuters that the number of those dead and injured is not clear at this time. He added that several bodies were recovered, while the wounded are still being evacuated.

A witness told the news agency that the victims were  watching a televised match.

No group has claimed responsibility, though Boko Haram has staged attacks in the area in the past. The same group abducted over 200 schoolgirls in Chibok, Borno State, on April 14 and is still holding them captive.