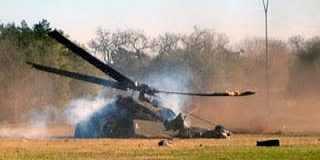 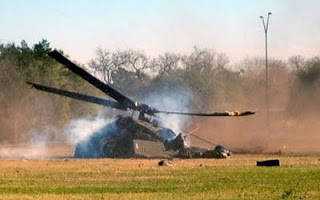 The Islamic militant group, Boko Haram is believed to have been behind the shooting down of the Nigerian Air force helicopter that was on a training mission around Borno state, according to reports by the International Business Times, and Catholic World, including local daily claims.

Nigeria’s military helicopter ‘take down,’ coupled with the recent take-over of the town of Damboa, in the Borno State, was called part of ‘a tough fight’ by Marie Harf, the U.S. State Department Deputy Spokeswoman. Her comments came Wednesday during the department press briefing in Washington, monitored by a SaharaReporters correspondent.

Two Air force personnel were reportedly killed in the crash but confirmation out of Abuja and military personnel spokesmen remains murky at press time.

The Mi-35 attack-helicopter was flying over the south of Bama which is close to the rebel-held town of Damboa, when it lost contact with the communication center and was later found to have crashed.

The helicopter was on a training mission and was shot down by Boko Haram insurgents on Monday, reported the Nigerian daily, The Punch.

Nigerian government officials have maintained that the helicopter had crashed over a technical failure, but a probe has been ordered. “Investigation has commenced to unravel the circumstances that led to the accident,” Director of Information, Major General Chris Olukolade told the daily.

The vigilante force made up of local residents defending the town, fled when it ran out of ammunition. Damboa is one of the biggest towns in Borno state and a significant trading center, the BBC reported.

Fighting around the town has damaged electricity stations, leaving the regional capital of Maiduguri without power for three weeks. The capital is about 53 miles from the captured area.

Since 2009, Boko Haram has led an insurgency with the goal of creating an Islamic state. It drew international attention earlier this year when it kidnapped hundreds of schoolgirls, many of whom are still held prisoner.

Nigeria’s government has faced heavy criticism for failing to rescue the girls and end the insurgency.

Nigeria’s President Goodluck Jonathan asked the country’s National Assembly to borrow $1 billion to fund a military response, but the assembly broke for a two-month recess before approving the request.

Some Nigerian soldiers say they are outgunned by Boko Haram. Critics say that much of Nigeria’s $6 billion military budget is lost to corruption. The military has come under criticism for abuses against civilians.

In June, Bishop Matthew Kukah of northern Nigeria’s Diocese of Sokoto told CNA that Boko Haram has gained power due to the weakness of the local government and the loss of credibility of the local Muslim

Kukah blamed “years of corruption” and “mismanagement of state resources,” for consigning citizens to “misery and squalor.” He said Boko Haram are “purely and simply criminals,” though they have some grievances similar to those of ordinary Nigerians opposed to corruption and poverty.

The Boko Haram uprising has been bloody. At least 2,053 civilians have been killed in an estimated 95 attacks in the first six months of 2014. Previously, about 3,600 civilians had died in the conflict. The U.S. government only recognized Boko Haram as a terrorist group in 2013, after years of lobbying from Christian groups and other human rights advocates.

Comments from Harf on Nigeria came at the tail end of Wednesday’s State Department briefing in Washington that focused mostly on events out of the Middle East and the downed Malaysian Jet in the Ukraine. Harf said that the U.S. ‘strongly condemned’ the recent take-over of Damboa, and that American support to Nigerian military officials in their fight against the Islamist insurgents was “on-going.”