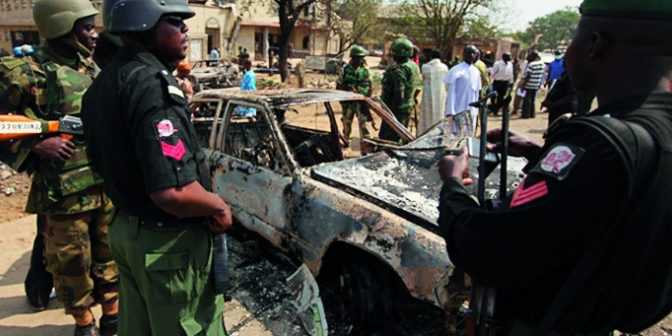 Department of State Security(DSS) in the federal capital.
The rumour of a possible invasion sent shivers down the spines of residents, most of whom were still in church as text messages sent to their phones described the situation as very serious with guns booming between the security agencies and the terrorist group.
The DSS through its spokesperson, Marylyn Ogar, confirmed that one of the Boko Haram detainees at one of the cells in the headquaters had attempted a jail-break at about 7am which was foiled. She was silent on the number of casualty, but sources said about 21 insurgents may have been killed.
Soldiers from the Guards Brigade were immediately drafted to mount roadblocks to prevent motorists and other road users from gaining acess into the area.
Military sources told Daily Sun that given the nature of the location of the DSS, headquarters, which is a Three Arms zone that equaly accommodates the Presidential Villa, National Assembly and the Judiciary, it was only normal for the soldiers of the Guards Brigade to take over the security of the area and restore peace.
As at press time, more soldiers were being drafted to the area while motorists trying to ply the route were asked to take alternative routes to their destinations.
A statement by Ms Ogar, who is the Deputy Director, Public Relations of the DSS, in confirming the incident, said the attempted jail-break which occurred at about 7am, took place when one of its personnel went to the detention facility within the premises to feed the suspects.
She said: “At 0715 hours, the Service suspect handler went to the detention facility within the headquarters to feed the suspects. One of the suspects attempted to disarm him by hitting him at the back of his head with his handcuff. His attempt to escape drew the attention of other guards at the facility who fired some shots to warn and deter others.
“The gunshots attracted the attention of the military with whom we have an understanding of mutual assistance in the event of any threat. The Army immediately deployed a team to reinforce our perimeter guards to forestall any external collaborators.  The situation has since been brought under control,” the statement said.
Meanwhile, security was beefed up at Presidential Villa as a result of the incident. The gate around Fire Service station coming from the Asokoro axis was shut, while helicopters were patrolling the area.
Residents in the area who pleaded to remain anonymous, said they thought there was an external invasion or an attempt to overthrow the government. One of them said they were advised to remain indoors.
Many of those who spoke are considering packing out of the area, insisting the incidenct has just confirmed that the Villa is a high risk area to live.
In another development, the Army, in its determination to stop insurgency, has started deploying special forces in the North-East, the hotbed of terrorists in the country.
The special forces are said to have been well-equipped for the task.
The soldiers are also known as the Chief of Army Staff Special Reserve Battalion who have been on standby for sometime now and undergoing intensive counter-terrorism training and weapon handling in one of the Army training institutions in the country .
The forces emergence,  according to a top Army source, will bring a lot of sanity and facilitate the objective of the operations which is to restore peace, law and order in the entire North-East.
Daily Sun gathered that the special forces are made up of soldiers trained to perform unconventional and often high-risk missions in hostile environments. They are usually deployed at the last stage of any war for mop-up operations.
The soldiers are made up of mostly counter-terrorists personnel, jungle experts, desert warfare experts, trackers, rangers and airborne men.
A top Army officer who maintained that the armed forces are capable of defeating the Boko Haram which is made of mostly foreigners, noted that but for the delay of the political masters to give the green light to the military to go ahead with the operations, the insurgency would have been a thing of the past by now.
Meanwhile, military equipment ordered by the Federal Government to boost the operations in the North-East have been arriving the country in the past week. They are being moved under tight security from the entry points to various military bases and training institutions across the country where the “firers” in the Nigerian Army have been assembled to test-fire the equipment to ensure they are in good perfect working condition before deploying them to the battle-front.
Similarly, sources said the morale of troops have been very high following an increase in their operational allowances which is being paid forthrightly by Army authorities. The increase in allowances has resulted in soldiers lobbying to be posted to the North-East to participate in the war against insurgency.
Already, fresh soldiers who have just completed their training from the Nigerian Army Depot as well as the School of Artillery, Kontagora, have been deployed in the various units and formations of the Army across the country.