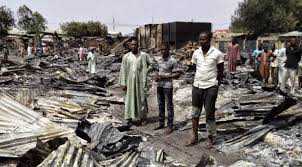 A Reuters correspondent saw a detachment of troops with armored personnel carriers and a fighter jet heading towards Buni Yadi in Yobe state on Friday morning. It was not clear if fighting was continuing in the area.

There was no information on casualties after the attack, which started at around 9 p.m. (2000 GMT) on Thursday, the sources said on Friday.

“Those boys (Boko Haram) came to Buni Yadi yesterday and attacked our people. They came in about nine Hilux (pick-up trucks) and opened fire … Our people have mobilized for reinforcement,” one of the sources said.

Boko Haram has been trying to carve out a state adhering to strict sharia in the country’s northeast since 2009. Buni Yadi was one of the towns captured by the insurgent group in 2014 and then reclaimed in March by Nigeria’s army.

The group took over large swathes of territory last year but were pushed back into their last stronghold in the Sambisa forest reserve with the combined efforts of Nigerian and regional forces, including Niger, Chad and Cameroon.

The militants have since dispersed and reverted to guerrilla tactics, including hitting towns well outside their Borno state heartland over the last two weeks.

Suspected Boko Haram militants on Thursday slit the throats of five civilians at a building site in the southern Niger village of Dagaya, close to the border with Nigeria, military sources said on Friday.

That followed an attack on the village of Tchoukoudjani in southeast Niger on Wednesday in which at least one civilian was killed and three wounded, the U.N. humanitarian coordinator OCHA said.

President Muhammadu Buhari has made quashing the insurgency his number one priority and is building up a base in Chad’s capital N’Djamena, out of which regional forces can launch attacks on the militants.