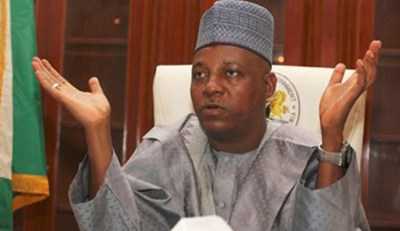 • Soldiers kill TCN staff, injure others mistaken for insurgents in Borno
Michael Olugbode in Maiduguri and Seriki Adinoyi in Jos    â€¨
Determined to seek practical ways of ending the Boko Haram insurgency, the Borno State Governor, Alhaji Kashim Shettima, yesterday reiterated his call for the granting of pardon through a programme of amnesty to the deadly Boko Haram sect.

His call coincided with the lucky escape yesterday from death by worshippers at the Evangelical Church Winning All (ECWA), Jos, when two bombs planted in the church were discovered and defused before they could explode.

Shettima said the recent attempt by 16 members of the terror group to renounce “the murderous ideology is one key proof that an amnesty programme targeted at creating an exit window for forcefully conscripted members is capable of reducing the number of Boko Haram fighters”.

Shettima’s support for an amnesty programme for the terrorist group was re-emphasised at an interactive session organised by his Special Adviser on Communications and Strategy, Mallam Isa Gusau, with selected journalists in Abuja.

Gusau said Shettima’s call was scientific and had been vindicated by a very desperate effort of Boko Haram leaders to stop their fighters from leaving their fold when a group of 16 members renounced the sect’s ideology in Borno State following which they were slaughtered by the sect’s leaders.

He said: “Governor Kashim Shettima was misunderstood by many Nigerians when in his May 29 inaugural remarks revisited his stance on the need to apply a political solution to fighting the Boko Haram by way of granting a window to admit those willing to surrender their arms and renounce the Boko Haram ideology.

“Shettima has held this position from his campaign days ahead of the 2011 elections for his first term. He had always advocated a combination of three approaches, which are:  the military which is what we have in place, an economic approach which is aimed at providing jobs for people and discourage citizens that Boko Haram terrorists are recruiting.”

Gusau said numerous arrests that were made by the military had shown that the economy plays a vital role in breeding insurgency.
He said Shettima’s third approach at resolving the Boko Haram insurgency and perhaps the most contentious is the political approach which in simple terms means pardon for terrorists who are willing to drop their arms and embrace peace.

He said: “It is important to note that the governor has always advocated that the three approaches should be applied together not exclusively. However, the amnesty issue has been the controversial one. The governor is not really talking about dialogue as a start, what he is advocating is to create an opening for those ready to abandon the sect to be able to do so freely, so that the sect can be broken.

“He is very particular about hundreds, if not thousands of members that were conscripted or forced to join the sect and became killers against their wish. If attacks on all communities can be efficiently done, then there wouldn’t be need for any debate on amnesty but we all have seen that many communities have continued to suffer from these attacks because the communities are so much, not only in Borno but round Nigeria and we don’t have the right proportion of security personnel to secure all communities.”

He lamented that: “When insurgents attack communities, they mostly target male youths, they arrest them and guard them into bushes. In most cases, even before taking them out of the towns they attacked, they preach in support of their ideology with promises of heaven for adherents and then openly ask aloud if any of the youths is willing to join them or not and whoever said he is not ready to join them, they slaughter him right there sometimes in the presence of his parents or they lay them on row and shoot all of them in matter of seconds targeting their skulls.

“We have seen many of these instances in videos recorded in Gwoza and other parts of Borno State.”
“Now, what Governor Kashim Shettima has been saying is that hundreds of these forcefully arrested and initiated young men may want to run away and drop their arms and there should be a policy and programme to admit them so that insurgents lose members and their strategy of arresting youths and forcing them to join them which is what they apply in sustaining their membership, can be deflated and I think the governor’s call on May 29 has been vindicated less than two weeks ago.

“You might have read it on most news platforms that on Friday, July 3, 2015, Boko Haram insurgents beheaded 11 of its members who renounced their ideology. According to accounts by some locals, what happened was that some members of the sect who are indigenes of some villages in Damboa Local Government Area indicated interest in abandoning the ideology but most of them were afraid of the consequences. Out of them, 16 summoned courage to renounce the ideology and they moved to Miringa village in Biu Local Government Area of Southern Borno. They wanted to join some communities like Ajigin and Talala in Damboa.

“The 16 insurgents went to Miringa on Friday, July 3 according to locals, then at night, commanders of Boko Haram sent a team to Miringa to fish out the 16 members that denounced the sect. The team went from house to house and got the 16 members intact. They didn’t fire any shot in order not to attract soldiers. They took the members out of Miringa and slaughtered 11 of them and went away with five. The bodies of the 11 executed members were found the following day while the other five were not seen,” he said.

He argued that if the 11 ex-members had returned to security officials under an amnesty programme, they probably would have no choice but to offer information that could be helpful and they would have to do that in order to stay alive knowing that their former colleagues in the sect would come after them.

Meanwhile, hundreds of worshippers yesterday morning escaped death at ECWA, Angwan Yanshi, Tudun Wada near the Federal Secretariat, Jos, Plateau State, as two explosives were allegedly recovered and defused in the church before they went off during a worship service.

This is coming exactly one week after a mosque and a restaurant in Jos were rocked by two explosions that left scores dead and many others injured.

A witness and member of the church simply identified as Mr Daniel said one of the explosives at the church was planted in the men’s toilet, while the other was recovered from a corner at the entrance to the church’s compound and defused by the police anti-bomb squad.

The police spokesman in Plateau, Mr. Abuh Emmanuel, corroborated the witness’ claim that the police anti-bomb experts were immediately deployed in the church where they defused the bomb at the entrance of the church, but did not confirm that one had earlier exploded.

But while the ECWA worshippers were lucky, a member of staff of Transmission Company of Nigeria (TCN) was not as lucky as soldiers who were guarding the Benesheik area of Jos shot and killed him while injuring three others including two soldiers who were guiding the TCN repair crew having mistaken them for insurgents.

Maiduguri and environs had suffered power outage for about two months, which necessitated the team of staff of the TCN accompanied by military escort on a task to repair the broken transmission.

A large part of troubled Borno State were without power for about six months last year when it was difficult to repair the transmission line following the activities of the Islamist group.

The present power outage that has been on for about two months could have been corrected about five weeks ago but for a mishap along Maiduguri/Damboa road when five soldiers who accompanied a team of engineers on repair mission of power installation were killed when their vehicles ran over landmine planted on the road.

This latest mishap, according to a member of staff of TCN, Ibrahim Garba, who spoke to journalists in Maiduguri yesterday, happened on Saturday causing fears that the hope for early restoration of electricity supply in the area may be far.

“In the gunshot our driver was killed and three other persons were injured including two soldiers.”
He lamented that “one of our drivers is still missing while one of our injured staff and the two other soldiers are receiving treatment at the General Hospital, while two vehicles of the TCN and that of the military were destroyed”.

When the news of the attack filtered into Maiduguri, the residents were irked by the action of the military who found it difficult to communicate with their team and even devise a strategy of identifying themselves as against militants.

A Maiduguri resident Abba Aisami said: “It is unfortunate that this could happen. We have never heard of the insurgents mistaking themselves and engaging one another in gunshots. Why should our soldiers be making this grievous mistake?
“This is an indication that there is no proper coordination among the military. If not how can they send a team from Maiduguri without communicating with their counterparts in Benesheik?”