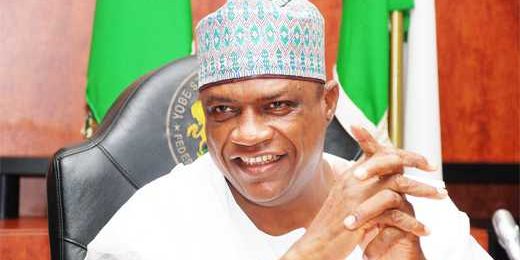 Yobe State Governor, Alhaji Ibrahim Gaidam, yesterday said that members of the Boko Haram insurgents, who attacked Damaturu, the state capital last week were in possession of superior weapons than the Nigerian Army.

This was even as the Federal Government yesterday said that it would intensify its collaboration with the Governments of Niger and Cameroun in the patrol of their borders to curb the activities of the sect. Gaidam, who spoke after inspecting military and police formations destroyed in Damaturu last Thursday during an attack by the insurgents, challenged the Federal Government to deploy more troops and advanced military and communications hardware to be able to suppress the terrorists.

The governor also observed that inadequate intelligence report contributed to the massive onslaught by insurgents on the state capital. “If we had 24-hour surveillance and intelligence gathering by the security agents on ground, some of this dastardly incident would have been averted,” he said. He said the Federal Government should deploy more security personnel to the state and equip them with more sophisticated weapons.

“The Federal Government should provide additional and more advanced military and communications hardware to enable the security forces on the ground to respond more effectively to any security breaches,” Gaidam said. The governor praised the security agents for their ability to repel the attacks and urged them to continue to dedicate themselves to the security of life and property in the state.

“Government and Nigerians must see the problem of insurgency as a national problem, and not as a problem of Yobe and Borno States,” he advised. Gaidam announced a Yobe government assistance of N1 million each to the families of security operatives who were killed in the attack and N500, 000 for those injured.

Col. Abdullahi Aliyu, Commander of the Special Operation Battalion in Damaturu, said the insurgents attacked eight locations in a coordinated operation. He said 30 insurgents were killed, while various arms, ammunitions and vehicles were recovered from the attackers.

State Commissioner of Police, Alhaji Sanusi Rufai, said the insurgents attacked the Mobile Police Base with armoured vehicle and burnt the armoury at the base. “They could not gain access into the armoury, they then set it ablaze, burning all arms in the armoury” he said.

In Abuja, the Minister of State for Foreign Affairs II, Nurudeen Muhammed, speaking at a press briefing at the sixth meeting of the Board of National Boundary Commission, NBC, said that joint patrol of the borders with neighbouring Niger and Cameroun has become paramount to ensure peace and stability. Mohammed maintained that the joint patrol would ensure that Nigeria’s borders are not porous.

Also at the briefing, the Director-General of NBC, Ahmed Muhammed, disclosed that the commission has put in place all that was needed to make Nigeria and Cameroun work together to ensure security and proper resettlement of the people of Bakassi. According to him, the government has released funds on two occasions for the resettlement exercise. Minister of Interior, Comrade Abba Moro, also said that in order to check frequent boundary crises among states, local governments and communities in the country, the Federal Government would take steps to properly demarcate Nigeria’s internal boundaries.

The General Officer Commanding, GOC, 2 Division of the Nigerian Army, Major-General Ahmed Jubrin, said that for the military to effectively fight insurgence, it must engage its personnel in contemporary security challenges.

According to him, terrorism is mainly the contemporary challenges facing the nation, which requires the military to be up and doing to be able to face the task of fighting it. He made this known at a training workshop organised at the 22 Armored Brigade, Sobi, Ilorin, He described the training as a routine programme, which takes place every year to prepare soldiers on exactly what he is expected of them during operations.

General Jubrin said the training bothered on skills at arms, which involves training them on how to handle weapons. While speaking, the Commander, 22 Armoured Brigade, Sobi Cantonment, Brigadier-General Idris Alkali, expressed the view that at the end of the training, the participants are going to be better prepared to undertake any task of facing contemporary challenges.

He also urged them to derive maximum benefit from the activities in order to apply it when attacked. Meanwhile, President Goodluck Jonathan yesterday in Jerusalem pledged that his administration would continue to actively combat the menace of terrorism in partnership with all peace-loving countries of the world.

Speaking at a meeting with President Shimon Peres of Israel, Jonathan said Nigeria would welcome enhanced cooperation and assistance from Israel for its ongoing efforts to end terrorist attacks and incursions in parts of the country.

According to him, combating the menace of terrorism remains a challenge that must addressed in partnership with all peace loving countries and peoples of the world.

“I seek the cooperation of your country to confront the security threat from terrorist groups that my country is now facing. There is no doubt that Israel has had decades of experience in combating terrorism.

Nigeria can benefit tremendously from your experience in this area,” Jonathan told the Israeli President. Jonathan noted the growing economic relations between Nigeria and Israel and called for greater collaboration between them in other sectors, saying that his administration would also welcome the greater deployment of Israel’s renowned expertise in furtherance of Nigeria’s agenda for national transformation in areas such as healthcare, agriculture, electric power supply and the management of water resources.

In his remarks at the meeting, Peres said that he was delighted and privileged to have had the opportunity of hosting the first Nigerian President to visit the state of Israel.