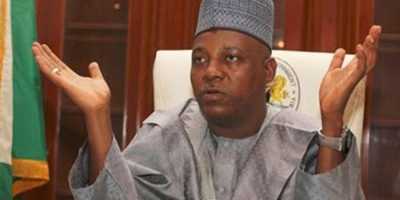 As the Nigerian military command deploys more troops in the troubled North Eastern region of the country, where Government forces has been battling insurgents,Borno State Governor Kashim Shettima painted yesterday a gloomy picture of the war against Boko Haram, saying the resources of the military are not adequate to defeat the insurgents. Speaking with State House correspondents at the Presidential Villa, he said that more resources should be voted to the fight against the insurgents as the situation has already degenerated into a war. According to him, Book Haram members are better armed and better motivated to carry out their evil attacks. But Shettima did not blame the situation on the military. He said they were doing their best in the circumstances. Said the distraught governor: “Well, in a nutshell, what we are being confronted with is that we are in a state of war. It is what I came to update Mr. President; the sooner we stop playing the ostrich and rise up to the challenges of the day, and marshall all resources towards visualising the antics of Boko Haram, the better for all of us. “But the bottom line is that we need more resources, more votes on ground. In all fairness to the officers and men of the Nigerian Army and police, they are doing their best, given the circumstances they have found themselves in.” The governor went on: “But, honestly, Boko Haram are better armed and are better motivated than our own troops. And believe me, I am an eternal optimist as I have always said, but I am also a realist. Given the present state of affairs, it is absolutely impossible for us to defeat Boko Haram. “I made it emphatically clear to Mr. President that the Boko Haram are better armed and better motivated. Anybody who is following events in this country can attest to the fact that they have a very smooth sail overrunning communities, killing people. Have we ever succeeded in thwarting any of their plans?” “They went to Konduga and did what they wanted to do. They held sway for over four to five hours before they left. They were in Kauri, Idzge and I don’t blame the Nigerian military. Honestly, we the leaders should be held responsible for our failure in leadership.” He also said he was not aware of any threat by Boko Haram to launch an onslaught against the people if Cameroon assists the Federal Government of Nigeria to fight the insurgents. “I am not privy to such an information but the President has assured us that he will put in his best to see that the unfortunate tendency of the Boko Haram overrunning communities and butchering innocent souls is brought under control.” On the number of casualties, Shettima said: “In Idzge alone, we lost 106 people and they raided eight other communities. So, until I get back home, today or tomorrow, I cannot give you the exact figure. But some were hospitalised with very great injuries so I am afraid the figures might climb.” He said it was too early to start talking about elections in the state as all attention should be on how to ensure peace and harmony.

“It is too early for anybody to talk about election when human lives are involved, power comes from God and He gives power to whom He will. I don’t care a hoot whether elections are here but I do care that peace is restored in Borno and the Northeast sub-region. So, people should stop playing politics,” the governor added. Shettima spoke with reporters after briefing President Goodluck Jonathan along with service chiefs in the State House.