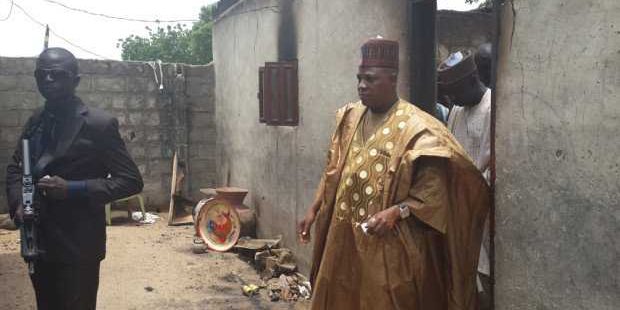 Borno State Governor, Alhaji. Kashim Shettima, Assessing Houses torched by Boko Haram Insurgents, in Konduga
Residents of Konduga, Borno State, had a bad Tuesday night, with Boko Haram fighters killing 51 of them.The insurgents stormed the town in their  hundreds, some of them in army uniforms. They drove in Hilux vans and  had an Armoured Personnel Carrier (APC) as back-up. For four hours, they  killed and maimed villagers. Many houses were razed.Hundreds were injured. About 1,000 houses and a mosque were burnt down.The insurgents also took hostage 20  young girls from a local school, a teacher said. The military also  confirmed that the attack took place and that it was assessing the  number of casualties.Survivors recounted yesterday the nightmare as Governor Kashim Shettima visited.“It is barbaric and unfortunate,” the governor said.In the ruins of the mosque yesterday lay  bodies ready for burial. They included those of three children who did  not look more than 10 years old.“Why us? Why us?” a woman wailed, trying  to understand why militants set on creating an Islamic state in the  country would attack a town of mainly Muslim farmers.Numerous villages in the area have been  attacked and hundreds have been killed in recent months, despite a  nine-month-long military state of emergency to halt the uprising in  Borno, Adamawa and Yobe States.The Boko Haram insurgency has made thousands homeless while more have fled to other parts of Nigeria and to neighbouring states.Farmers described Tuesday night’s attack  to the governor. They told the governor that about 400 attackers in  military camouflage drove in from all directions in apparently stolen  army trucks led by an armoured Personnel Carrier (APC). They called  people out then opened fire, the survivors said.The few soldiers and police stationed in the town, outnumbered and outgunned, fled, they said.The extremists arrived at 6 p.m. and  went from house to house, using homemade bombs to set them ablaze.  Shettima said about 70 per cent of the town was destroyed.The attackers only fled around 10 p.m. when a military aircraft strafed them into flight, survivors said.Angry residents asked the governor why it took hours for the military to

respond.Konduga, an agrarian centre of about  10,000 farmers, is 35 kilometres and 30 minutes’ drive from Maiduguri,  the state capital, which is the headquarters of the newly created  military 7th Division which also has an air force base.Shettima told reporters who accompanied  him on the trip that the extremists, “are better armed and better  motivated” than the military. He said the soldiers were doing their best  but were not as well-equipped.Shettima told residents he would remain  with them until promised food, clothing and other emergency supplies  arrived later yesterday.