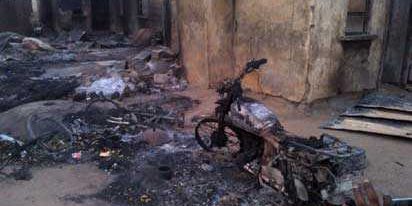 Some 70 gunmen stormed the town of Bama in Borno state on a convoy of motorcycles and pick-up trucks late Thursday, said Baba Shehu from the area’s local government.

“They shot … 27 persons and injured 12. About 300 houses were burnt,” Shehu told reporters in Borno’s capital Maiduguri, where Boko Haram was founded more than a decade ago.

“Immediately people saw the gunmen, they (locals) started fleeing the town but the insurgents opened fire on them,” said Shehu, adding that the wounded were receiving treatment at a local hospital.

In a separate incident on Saturday, Shehu said 13 people travelling on a bus in the same area were “ambushed by the (Islamist) militants and murdered in cold blood.”

“The attackers took the travellers unawares … Some of the passengers escaped unhurt from the vehicle but were pursued by the insurgents and killed,” he added.

No other details were provided about the attack.

Bama and other remote parts of northeast Nigeria have seen a series of brutal attacks in recent weeks which have left hundreds dead, despite official assurances that the insurgents have been weakened by an ongoing military offensive.

Details of massacres in Borno have typically been slow to emerge.

The mobile phone network in the area has been switched off since May, when President Goodluck Jonathan declared a state of emergency across the northeast and launched the military operation aimed at crushing at the Islamists’ four-year uprising.

Also on Saturday in Borno, suspected Boko Haram gunmen killed 30 people in a wedding party, including the groom.

The group was on its way back to Borno from a neighbouring state when the attackers opened fire, leaving a trail of bodies lying on the road, residents said.

Boko Haram has said it is fighting to create an Islamic state in Nigeria’s mainly Muslim north but its demands have shifted repeatedly.

The group’s purported leader, Abubakar Shekau, has been declared a global terrorist by the United States, which has put a $7-million bounty on his head.

In 2009, the insurgency was largely concentrated in Borno but later spread across the wider north and as far south as the capital Abuja.

A Human Rights Watch toll earlier this year said the ongoing conflict has cost more than 3,600 lives, including those killed by security forces who have been accused of major abuses, although the current figure is certainly much higher.

The military maintains that its massive offensive against the Islamists, which has included aerial bombings, has left the group in disarray and contained the rebel fighters in remote parts of the northeast.

But a major attack last month in Damaturu, the heavily fortified capital of northeastern Yobe state, cast doubt on that claim.

Shekau claimed responsibility for the October 24 attack in a video released on Sunday and obtained by AFP.

On December 14, Jonathan will have to decide whether to extend the state of emergency when its six-month mandate expires.

Some analysts say the emergency measures and the military assault have been effective, while others counter that Boko Haram could still regroup and resume attacks on a range of targets across the country.