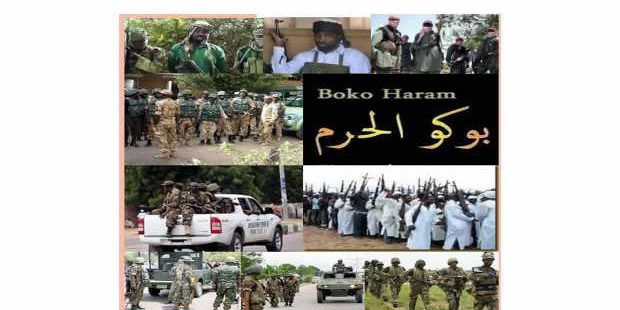 The casualty figure is yet unknown, but an hospital source said it is high. The attacks, according to information gathered, were carried out with the use of rocket propeller an improvised explosive devices on military checkpoints, among others, within the metropolis. Eye witnesses said the first attack was carried out around the NNPC mega station located at suburb of Damaturu.

has been declared. The NNPC mega station is about two kilometres away to the City of Damaturu where military operatives have one of their checkpoints few metres away.

Because of the presence of the security checkpoint, many phone callers from Maiduguri turned the place to a call centre with adequate security cover. However, luck run out of people in the area as gunmen launched a deadly attack on them, before moving to other places in the city.

The attack which signaled their presence before penetrating the town a little later started around 5:30PM and lasted till midnight as security operatives responded promptly. Although, the number of casualties is still sketchy, sources said several number of the terrorists were killed. Security operatives were said to have been lost in the battle too. Residents said sounds of gun shots and Improvise Explosive Devices (IED) were heard all over the place.

They however could not give details of the number of people killed. A source said, “I saw dead bodies on the streets near my house, but could not ascertain whether the dead bodies are those of Boko Haram members, innocent civilian or security operatives”. An attendant at the General Sani Abacha Specialists Hospital, Damaturu, who did not want his name mentioned, told journalists that they have received many dead bodies, and more are still coming.

The spokesman of the Special Operation Battalion in Yobe State, Capt. Eli Lazarus, who confirmed the attack said “security forces in the state capital are still in a gun battle with the insurgents.” Shortly after the confirmation of the attack, Captain Eli Lazarus in a statement says, “the Special operation Battalion Damaturu hereby imposed a 24 hours curfew across Yobe State with immediate effect, as the battalion steps up its operation to rid the state of insurgents.”

The statement urges law abiding citizens to remain calm and to accord the security operatives the usual cooperation. Lazarus however confirmed the level of casualties and destruction caused by the attack which lasted for over eight hours. He said, “21 of the insurgents were killed during the encounter, while 3 of their vehicles were recovered. Other items recovered include 4 AK47 Rifles, 1FN rifle, 1 rocket propelled grenade, and several arms and ammunitions.”

The insurgents, according to Lazarus, torched some security formations including the Area Police Command among others. He did not say the casualty figure on the part of the security agencies, however. Yesterday’s attack is a serious setback to the relative peace being enjoyed across the state and Damaturu the state capital in particular. As at the time of filing in this report, there was no official statement from the state government on the unfortunate incident.

In continuation of its fight against Boko Haram insurgents in the North-East, the troops of the 7 Division of the Nigerian Army has destroyed Boko Haram camp, killing 74 insurgents in Galangi and Limanti villages of Kaga local government area of Borno State.

The killing of the insurgents is coming barely some hours after the attack in Damaturu the capital of Yobe State which has witnessed relative peace before the recent attack.

The Army, in a press statement signed by its spokesman, Lt. Col. Muhammad Dole, stated that the operations which involved ground and aerial assault supported by the Nigerian Airforce led to the destruction of the terrorist camp, killing 74 insurgents, while several others escaped with gunshot wounds. Items recovered from the terrorist’s camp, according to the release, include two Isuzu Tiger pick-up vans and five Hilux belonging to the terrorists were destroyed, while two soldiers were wounded during the operation.

The General Officer Commanding 7 Division Nigerian Army, Major General Obidah Ethan, said he appreciated the general public for their resilience and cooperation with security agencies for providing timely and credible information to security agencies. General Ethan also reiterated the commitment of the Nigerian Army 7 Division to ensuring safety of lives and property of all citizens within its area of operations.