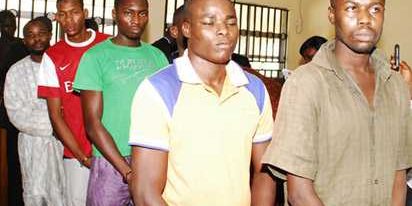 A  Federal High Court sitting in Abuja yesterday issued a fresh order  remanding in prison custody three suspected Boko Haram members,  including a university don, Dr Mohammed Yunus.
The trial high court judge, Justice Gabriel Kolawole, gave the remand  order after a four-hour legal argument by counsel in the case on why or  not bail should be granted the accused persons pending trial.
He also fixed February 28 to deliver a well considered ruling on  their arguments. Yunus and the two others; Umar Musa and Salami  Abdullahi, are facing trial for purportedly using their alleged  membership of the proscribed Boko Haram sect to terrorise people of Kogi  State.
The Federal Government had filed an eightcount charge against them  and they were later arraigned last week before Justice Kolawole.  Specifically, they were accused of engaging in acts of terrorism and  unlawful possession of weapons and ammunition; recruiting members for,  supporting and funding the Boko Haram sect, among others. The  arraignment came after being detained by the SSS for over three months.
But the three pleaded not guilty to the charge when it was read to  them. Upon their non-guilty plea, the judge ordered that the three be  remanded in Kuje prison, Abuja. He adjourned till yesterday to take  their bail applications.
At the resumed hearing of the case yesterday, counsel to the  university don, Hassan M. Liman, SAN, begged the court to admit his  client to bail. He argued that the offence committed by his client is  bailable and does not carry death penalty to warrant denial.
Citing Section 118 (1) of the Criminal Procedure Act, he maintained  that the court even has the discretion to admit an applicant charged to  court on any offence including a capital offence. In a separate address  filed by James Ocholi, SAN, on behalf of the second accused, he begged  the court to admit him to bail on health ground.
He said he had attached a medical report from the Garki Hospital,  Abuja indicating that his client has been suffering from hypertension  and he has been on drugs. In his argument, Ocholi said there was no  credible evidence against the accused, adding that there was no link  between them or any other person.
Counsel to the third accused, on his own, called on the trial judge  to grant bail liberally and generously on the matter as the accused does  not pose any danger to the witnesses in the case as stated by the  prosecuting counsel in his counter affidavit. Replying, the prosecution  counsel, M. B. Jones Nebo, opposed the bail application on the grounds  that the accused persons might abscond from trial based on the weighty  punishment awaiting them upon conviction by the law court.
Nebo in her submission said that the trial borders on national  security and Kogi State in particular, and that granting the bail will  amount to security risk and threat to the unsuspecting public.

He also urged the court to uphold his submission to protect the state  witnesses. Justice Gabriel Kolawole, after hearing both sides on the  bail application adjourned ruling on the application till February 28  while the suspects are to remain in the custody of Nigerian prison.  Until his arrest, Dr Yunus was a lecturer in Arabic and Islamic Studies  at the Kogi State University.
The two others are among the six men paraded by the SSS last November  and accused of being members of the deadly Boko Haram sect.
by ISE-OLUWA IGE AND SEYI ANJORIN