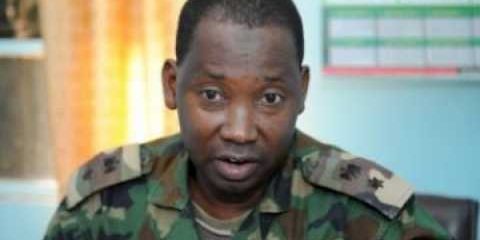 Citing strategic and sensitive considerations, the Nigerian Army has deployed the spokesman of the 7th Division, Lt. Col. Sagir Musa out of Maiduguri, a knowledgeable source told SaharaReporters at the weekend.

Musa, who became widely-known at the height of Niger Delta militancy, was deployed to Maiduguri, the hot bed of the Boko Haram sect after the July 2009 when the sect became more sophisticated.

The source added that Musa had on several occasions been active in tough operations against Boko Haram, refusing to sit back on his information desk, a doggedness that put him on Boko Haram’s spotlight as a potential target.

On August 19, 2013, Musa returned to the limelight when he advanced that Boko Haram’s leader Imam Abubakar Shekau, may have died.

“It is greatly believed that Shekau might have died between July 25 and August 3, 2013,” he announced. “He was reported to have masterminded the kidnap of the seven French citizens and that of the elder statesman, Alhaji Shettima Ali Monguno, in addition to many murders of Islamic clerics in northern Nigeria.He was also responsible for the bombings of many places of worship and public buildings, including police and United Nations Headquarters in Abuja.”

The statement generated controversy that was elevated on September 25 when Shekau appeared in a new video denying Musa’s claims.

“They said I am dead, but here I am. The world should know that I am alive and will only die at the appointed time. Everybody should be judged according to the dictates of his conscience. What I am doing is written in the Holy Qur’an and the Hadith and I will not stop.”

The renewed controversy is thought to be behind his deployment. At the time of this report, Musa was said to be on pilgrimage in Saudi Arabia. In Maiduguri, he has been replaced by Lt. Col. Mohammed Dole.

Musa will next serve as spokesman of the Training and Doctrine Command (TRADOC), in Minna, Niger State.