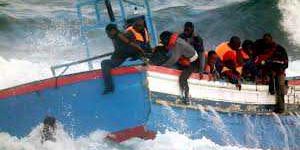 Ten people drowned and another 20 could not be unaccounted for after a boat carrying migrants from Nigeria, Benin and Burkina Faso sank off the coast of Gabon, a police official said on Friday.

The boat had left Nigeria and was within 15 minutes of arriving in Gabon’s capital Libreville when it went down late on Tuesday night. Gabonese authorities rescued 23 survivors and the search continued into Friday.

“Last night we had six bodies and since this morning we have found four more, which makes a total of 10 recovered bodies. The immigrants drowned,” said a member of the nautical brigade of Gabon’s national police, who asked not to be named.

Local newspapers reported that the human traffickers attempted to extort more money from the immigrants and had begun throwing those who could not pay overboard.

Gabonese authorities said they were investigating the cause of the sinking.