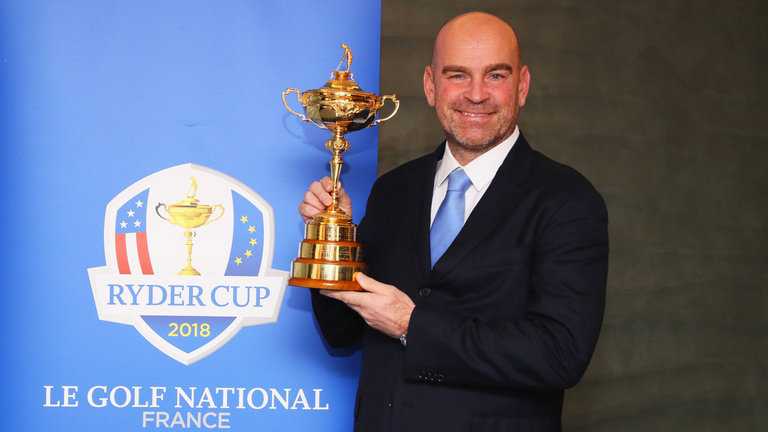 Thomas Bjorn has outlined the importance of getting the French golf fans behind his team as he steps up his preparations for the 2018 Ryder Cup in Paris.

The European skipper is in the French capital this week to continue his planning for the contest at Le Golf National in 18 months’ time, and he is fully aware that one of the main keys to reclaiming the trophy is to have the full support of the home fans.

Qualification for the team does not start for another six months, but Bjorn has been encouraged by some strong early-season performances from Tommy Fleetwood in Abu Dhabi and European team stalwart Sergio Garcia following his impressive victory in Dubai.

“It’s been a while since I’ve been in Paris, but I wanted to come here and get started and you can get an idea of what’s ahead for French golf,” The Dane told Sky Sports News HQ.

“There’s still a lot of planning ahead and it takes up a lot of time, but sometimes you realise that 18 months might not be enough time to prepare! Getting everything in place is a big task, but it’s one I’m really looking forward to and I’m enjoying every moment of it.

“It’s hugely important to get the French golf fans on board and make them realise why the Ryder Cup is coming to France. They have put a lot into golf over the years and have been growing the game in the country.

“You’re not just here to represent Team Europe and the Ryder Cup, you’re also here to do a lot of good for the sport and you need the public on your side. It’s an education and a big package, but the public here will have a huge part to play in the success of the competition.”

Bjorn was impressed by the mental strength of Fleetwood and Garcia at each end of the Desert Swing, and he is looking forward to seeing the talented crop of youngsters coming through and challenging for a place on his team.

“There have been some really good performances so far this season, and the wins for Tommy Fleetwood and Sergio Garcia in the Middle East were very strong mentally,” added Bjorn, who was assistant to Darren Clarke at Hazeltine last year – his first defeat in seven Ryder Cups as a player or vice-captain.

“I know all the players well and I know what they’re capable of, and obviously you want to see those who you consider your top players continuing to perform well. But you also want to see the new talent coming through and playing well … and winning well.

“They need to do the right things on the course and perform under pressure, and I’m taking notes of everything they are doing. But the Ryder Cup is a long way ahead and the team will take a while to take shape.

I can’t really affect that too much at the moment, but I’ll be watching closely for the young talent proving they can handle everything that comes with being in the Ryder Cup team.

“I wouldn’t have taken on this job if I didn’t believe I would be a winning Ryder Cup captain. As a sportsman, you want to win whether it’s as a player or a captain of a team. My job is to deliver a winning team next year, but I’ve also got to be aware there will be an opposing team who are very capable and very good.