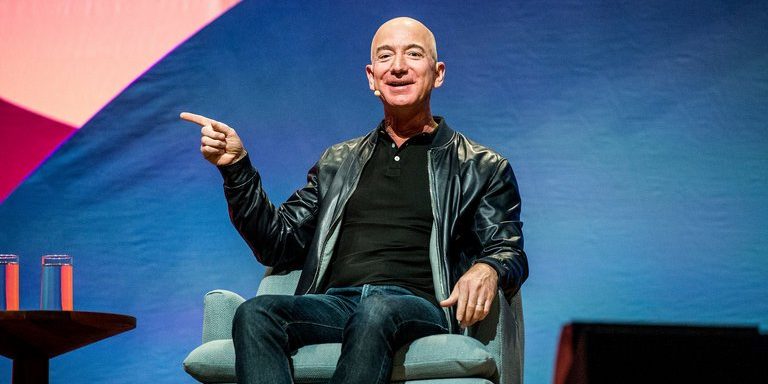 Hello again! I’m finally getting back to a somewhat normal existence after last week’s Facebookpalooza. I even filed my taxes with several hours to spare, which is a first for me.

This week, as Mark Zuckerberg presumably took a very long nap, we heard from another tech billionaire — Jeff Bezos, the chief executive of Amazon, whose empire (and net worth) makes Mr. Zuckerberg’s look relatively modest.

Every year, Mr. Bezos’ shareholder letter is treated by many Amazon fans as a kind of papal encyclical — an update on company news, interspersed with nuggets of management advice and details of Amazon’s inner workings. This year’s letter, which was released on Wednesday, has already drawn glowing reviews. Noting that he reads a lot of shareholder letters, my colleague Andrew Ross Sorkin called it “one of the most engaging I’ve ever seen.” The CNBC host Jim Cramer said it may have been “the best I have ever read by any C.E.O.”

What was so special about it?

Well, for one, it underscored just how unfathomably big Amazon is. Amazon has 560,000 employees, and the company added 130,000 jobs in 2017 alone. For context, that means that Amazon added more than a Facebook’s worth of employees during every quarter last year.

The company also disclosed, for the first time, the number of Prime subscribers it has: more than 100 million. Those members bought five billion items in 2017, making it the company’s biggest year on record.

While the median salary at Facebook, a company full of well-fed engineers, is a whopping $240,430, Amazon’s median worker salary is only $28,446, reflecting its reliance on an army of low-paid workers at its fulfillment centers. Amazon has been criticized for grueling labor conditions and creepy employee-tracking practices, but the workers keep showing up. As a result, Amazon has become America’s second-largest private employer, behind only Walmart.

As Jason Del Rey at Recode noted, many of Amazon’s fulfillment center employees likely aren’t Prime subscribers, since the service has “skewed way more popular among higher-income households” than among working-class families. Amazon is trying to broaden its appeal beyond the mass affluent by introducing monthly payment plans and discounts for people on government assistance, but there is still room for competition on the lower end of the market. (Personally, I’m fascinated by Wish, the online dollar store that has given American consumers direct access to a flood of cheap goods produced in China.)

■ Mr. Bezos spent a lot of time talking about his standards — specifically, high ones. “I believe high standards are domain specific,” he wrote, “and that you have to learn high standards separately in every arena of interest.” He continued: “You can consider yourself a person of high standards in general and still have debilitating blind spots.”

■ Mr. Bezos gave updates on Amazon’s acquisition of Whole Foods, and said Amazon was working on ways to “recognize Prime members” at Whole Foods checkout counters, which sounds both exciting and extremely creepy.

■ Mr. Bezos took inspiration from an unlikely source — a “handstand coach” who helped a friend of his learn how to do a full handstand. The coach, he wrote, warned his friend that realistically, she would need to spend six months practicing. The story taught him that “to achieve high standards yourself or as part of a team, you need to form and proactively communicate realistic beliefs about how hard something is going to be.”

One thing notably absent from Mr. Bezos’ letter was any mention of HQ2, the company’s much-ballyhooed search for a second headquarters. Amazon officials reportedly visited Newark this month, and have also visited Philadelphia and other finalist cities as they try to make a final decision this year.

Amazon’s economic dominance — made clear by the staggering facts and figures in Mr. Bezos’ letter — makes the billions of dollars in tax breaks and incentives that have been offered to Amazon by job-hungry cities look even more ridiculous. If there’s one company that doesn’t need your city’s largess, it’s Amazon.

A few other tech stories of note this week:

■ Cambridge Analytica, the sketchy political data firm that has been at the center of Facebook’s recent privacy scandal, has sought to develop its own cryptocurrency and conduct an initial coin offering, because of course it has.

■ Speaking of Facebook, my colleague Sapna Maheshwari reports that its advertising team has been quietly reaching out to big clients, trying to keep them from jumping ship as the social network struggles with its public image. Carolyn Everson, a Facebook ad executive, has reportedly “received many public messages of support and praise for her leadership on Twitter and on her Facebook page from agency executives and chief marketing officers, including those at General Electric and Toys ‘R’ Us.” Truly, I am touched.

■ Marissa Mayer, the former chief executive of Yahoo, emerged from the Witness Protection Program to give an interview to my colleague David Gelles.

Kevin Roose writes a column called The Shift and is a writer at large for The New York Times Magazine. You can follow him on Twitter here: @kevinroose.