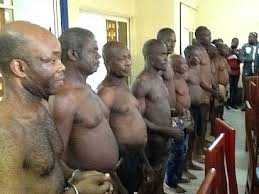 to order the immediate release of its leader, Barr. Benjamin Onwuka and other members who have been in detention for the past two months.

The group said it was set to institute a court action against the Inspector General of Police at the International Court of Justice, ICJ, if he failed to free their members forthwith.

It could be re-called that the BZF members were arrested after they had attempted to gain entrance into the Enugu State Broadcasting Service, ESBS, with the intention of making a live-broadcast.
They were later paraded before journalists in Enugu and moved to the Force Headquarters, Abuja.

In a press statement made available to journalists in Enugu on Tuesday, the national publicity secretary of the BZF, Mr. Chiemeria Chibundu said the continuous detention of their members without trial was against the provisions of the 1999 Constitution of the Federal Republic of Nigeria and all other international treaties.

He stressed that the police should have gone ahead to prosecute Onwuka and other members of the group if indeed they were found guilty of any wrong-doing.

Chibundu, however, said it was unfortunate that the police had decided to endlessly clamp down on armless members of the group, whereas terrorists were holding Nigerians to ransom in the North-Eastern part of the country.
He decried a situation where the BZM members were paraded naked like common criminals, whereas even some suspected Boko Haram members, who were arrested in Imo State, were shielded from the public by the police.

He said, “we condemn this situation where our members were tortured, humiliated, stripped naked, handcuffed and paraded before the public by the commissioner of police in Enugu State.

“They were later bundled to the police headquarters, Abuja and abandoned in underground cells without trial, care, neither has anyone been allowed to see nor visit them.

“The above situation is totally unacceptable to us and we are calling on President Goodluck Jonathan to prevail on the police to free these non-violent freedom fighters”.

“We insist that our members were not involved in the killing of a police officer as was alleged; the policemen, who were drafted to the ESBS, have explanation to what happened to their colleague; our members had no arms and couldn’t have shot the policeman.
“Enough of this unjust persecution of the Biafra Zionist Federation; we should be allowed to pursue our freedom, which is a right we have under the international treaties, all of which Nigeria is a signatory.