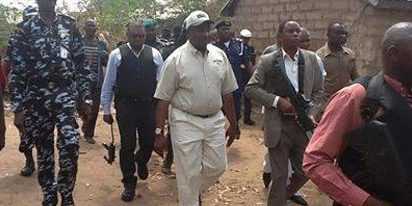 Governor Gabriel Suswam of Benue State, Monday, afternoon escaped death by the whiskers when his convoy was ambushed by  Fulani herdsmen who engaged his security aides in exchange of gunfire at Tee‑Akanyi village in Guma local government area of the state.

This was just after the rampaging invaders had sacked about 64 villages on the Daudu‑Gbajimba axis of the council, killing no fewer than 37 persons whose corpses still littered the invaded communities.

In his reaction, former PDP chairman, Senator Barnabas Gemade, representing Benue North East Senatorial District alleged that those behind the invasion and killing of the people of Tiv and Idoma of Benue State were mercenaries  from neighbouring African countries of Chad, Mali and Cameroon that had been contracted to destabilize the country.

Governor Suswam had alongside journalists, speaker of the state House of Assembly, Terhile Ayua, the Benue State Commissioner of Police, Adams Audu and his team, soldiers, and other security personnel embarked on an assessment tour of communities recently invaded by the herdsmen on Daudu‑Gbajimba road.

At Uikpam‑Mbabai, the governor and his team discovered that the marauders had attacked and pulled out of the community that morning, after razing houses and barns and beheading about 30 persons whose remains were left behind in several houses and huts.

Soldiers pull out of Suswam’s convoy

The governor and his team were, however, taken aback when the military personnel on the tour decided to pull out of the tour on the grounds that they were not detailed to travel with the team to Gbajimba.

The decision of the soldiers did not deter the governor who insisted on making the trip to Gbajimba without the military personnel.

It was while the governor’s convoy was heading to Umenger village, a distance of about 20km from Daudu, that the team discovered that the herdsmen had completely taken over all the villages on that axis, razing and looting property of the locals who had deserted their homes.

The convoy, however, ran into a fresh attack at Tse‑Akenyi village where fire was still burning in several houses in the community, while the attackers continued with the looting of property of their victims.

The entourage did not realise that the marauders had taken cover in some of the abandoned houses. While Governor Suswam alighted from his car and was busy inspecting the level of destruction in the community, heavy gunfire started raining from nearby bushes.

The gunfire sparked a battle between the security personnel on the governor’s entourage and the invaders who took cover in nearby bushes.

The exchange of gunfire lasted almost one hour. Governor Suswam was, however, safely spirited into his official vehicle by his security detail when the shooting subsided and was driven to Gbajimba, the local government headquarters, where he addressed some of the fleeing locals and displaced persons.

Speaking to the aggrieved people, Suswam lamented the spate of attacks on the people of the state by Fulani herdsmen, assuring the displaced persons that government would not abandon them in their time of grief.

Meantime, on his way back from the assessment tour, Governor Suswam picked and conveyed the remains of some of the beheaded victims to the mortuary in Makurdi, the state capital.

Speaking on the invasion of Tiv/Idoma lands of Benue yesterday,  Senator Gemade, a former National Chairman of the Peoples Democratic Party, PDP, in an interview in Abuja alleged that most of the attackers were not herdsmen but miscreants that had the motive of causing internal crisis in the country, especially in the Middle Belt region.

He said: “I think they really want to see some war fought in the Middle Belt part of the country which is a very big shame. Otherwise, how can you see an insurgence taking place in the middle of the country and the people who are doing this are coming from neighbouring countries such as Chad, Mali, Cameroon, Congo and many others?

“How did they pass through all the land that they passed through before getting to Benue which is right in the middle of the country? I think it is a matter which has to be looked at very critically. The law enforcement agencies have to take it upon themselves to look into this matter.”

Gemade said the development was worrisome and required immediate attention from the Federal Government. He asked the government to investigate and bring those behind the killings to book, stressing that it was not only in Benue State that there was fertile lands.

He said: “Well, it is a matter that needs very urgent action by a combination of all the security agencies in this country to fish out the people behind this. The Tiv and Idoma people are not the only people who have fertile lands in this country.

“There are many other tribes living in the Benue region where the land is very fertile and full of grasses for animals. But why are they not fighting those tribes? Why are they insisting on fighting the people who are in Benue State?

“That tells you clearly that there is a motive behind it and this motive is not just addressed to the people living on fertile land but against a system and that system is against the peaceful existence of Nigeria and the peaceful performance of the government of the nation at this time.

“And I think the law enforcement agencies should take this serious.”

Gemade said he, alongside other political leaders in the state, had been preaching for peaceful co‑existence of Nigerians even as they were aware that any community could rise and pick arms against another.

“As political leaders, we are talking about it. We are calling on people in this country not to allow our people take laws into their hands. You know that every community in Nigeria can raise an army if it wants to do so and it is not right for us to begin to raise an army for ourselves and that is why the national defence forces have to do their jobs,” he stated.

The lawmaker further stated that what was curious in the whole issue was that “sometimes when you check these invasions by these Fulani herdsmen, though we all know they are not all herdsmen, it is a mixture of miscreants from various parts of Africa who are coming to cause this disturbance.

“We are telling the government that they must raise a defence force that will come in and raid these areas and get rid of these people.

“We are also calling on people in these affected areas to be vigilant and  not aid and abet those coming into their lands to go and attack the people.

“We are not the only ones living on fertile lands, so why are they not attacking the other people? Let them not push us to a point where we will have to raise an army.”