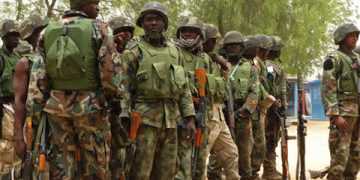 The people, who are mostly from Gwoza town of Borno State, have been taking refuge in the area since the recent seizure of their town by the Boko Haram insurgents.

One of them who narrowly escaped the soldiers’ raid, said the military men invaded their rooms at midnight and started shooting and arresting people.

“Around 1am, we were all asleep, when we heard gun shots. Some of us started to run. I told myself that I would not run, since I have not committed any wrong. Everyone ran but I remained lying down in my room,” he said.

He said the soldiers began to search the rooms and arrested whoever they saw.

“But unknown to us, the soldiers had shot two of our people. After we returned to our rooms, we saw their bodies. If you check the room, you will see blood everywhere.

“Having seen that, I told my colleagues that we are not supposed to sleep in the place again, because they (soldiers) would likely comeback for the bodies. I advised that we should all go back into the bush,” he said.

On the people who sustained injuries, he told the BBC that two of those shot ran to the hospital with bullet wounds on their bodies.