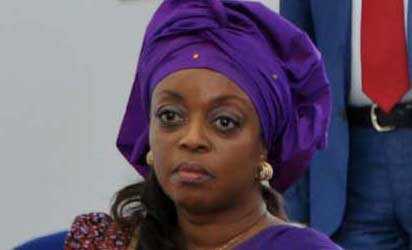 Following the ongoing travails of Nigeria’s former Minister of Petroleum Resources, Mrs. Diezani Alison-Madueke, over allegations of money laundering and bribery brought against her by the United Kingdom, UK, National Crime Agency, the family of Rear-Admiral Allison Madueke (Retd), husband of the former minister has finally released a statement to set the records straight.

The statement, entitled: “The Truth Versus The Media Hysteria Against The Madueke Family,” signed by Barrister Oscar Onwudiwe, for and on behalf of the Madueke and Agama families, stated that Diezani is currently battling cancer, which started while she was in office, and that she has been receiving treatment in the UK .

The family however, urged Nigerians to pray for her recovery, adding that she is ready face the allegations and give account of her stewardship, while in office.Also adding that her health crisis has unfortunately exacerbated in recent times, the family said she completed months of chemotherapy just last week and is scheduled to undergo surgery next week in London.

It added that the health crisis has unfortunately exacerbated in recent times, She completed months of chemotherapy just last week and she is scheduled to undergo surgery next week in London.

Read the full statement below:

1. In this era of cyber terrorism, decency dictates that one should respond to false and defamatory allegations with silence. However, there is a limit to how much any reasonable person can bear the tactics of these cyber terrorists. We all know that what makes a lie fly is a little truth contained therein. This happens to be the weapon used by most online news media to feed their weird obsession with defaming highly placed people.

2. The Madueke family is appalled at the ongoing media frenzy against Mrs. Diezani Alison-Madueke by a section of the mass media following an invitation to her by the British authorities last Friday for reasons which have yet to be disclosed. For the avoidance of doubt, the family would like to state emphatically that it has no issues with any persons from the family being invited anywhere in the world to answer questions about their private or official conduct. The Madueke family believes in law and order, honour and due process.

3. However, it is clear that here is a deliberate and vicious campaign to demonise members of the Madueke family, with all manner of frivolous allegations.

For example, an online news media gleefully published that Mr. Ugonna Madueke “owns at least three properties in the United States.” It even called the properties “POSH” and went on to state the addresses. THEY LIED.

4. Mr. Ugonna Madueke has NO PROPERTY ANYWHERE in the United States and has NEVER OWNED ONE. The USA is a country that runs on transparency, accountability and technology. A little honest effort by the online news media would have provided in a few minutes the real ownership of the properties at issue.

5. For historical accuracy, the Madueke family declares without any fear of contradiction that 11711 Scooter Lane (a three bedroom townhouse) in Fairfax, Virginia, was acquired by the Madueke family in 1997 when Ugonna was only 10 years old. Ugonna’s siblings lived in this property while attending George Mason University in Virginia, USA.

Records available to the appropriate authorities in the United States can also show that 13116 Silver Maple Court in Bowie, Maryland, USA belongs to an uncle of the Madueke siblings and was purchased in 1995 when Ugonna was only 8 years old.

As a student at the University of Maryland in 2002, Ugonna stayed with his uncle at the said address. All of this was before Mrs. Diezani was appointed to government office. No Madueke or a distant relation has anything to do with the ownership of No. 4227 Summit Manor Court in Virginia.

6. It is evident that what the online news media did was to turn on an internet search engine and maliciously reported that every property where Ugonna Madueke has ever lived in the United States or used as his address must belong to him. The description of the properties as POSH was the icing on the propaganda cake. This is not only unprofessional, as it offends the tenets of journalism, it is also clearly not in resonance with a clear conscience.

7. The online news media also reported that Ugonna and his cousins registered a company by name Hadley Petroleum Solutions Limited, which they have been using to deal with Nigerian crude oil sales. As young men bubbling with enthusiasm and fantasy, they registered a company but after two years of no jobs, the company folded up. The company never had a bank account, let alone being a trader of Nigeria’s crude oil. They lied.

8. The online news media took its campaign to the in-laws of the Maduekes. It claimed that Mrs. Beatrice Agama, the 81-year-old mother of Mrs. Diezani Madueke, owns a house in the United Kingdom. A LIE! Mrs. Agama has no house or property in the United Kingdom. She has been staying in a rented two-bedroom flat from where she is receiving medical attention for a broken femur. Her son, Timi Agama who has been living in the UK for decades, used to have a house in the UK long before his sister was appointed to government, and he sold it long ago.

Since then, he has no house in the UK. Archbishop Doye Agama of the Apostolic Pastoral Congress in Manchester, who is in his 60s, is a successful professional and consultant well known amongst his peers, but he does not own Unit 8 Quebec Building in Manchester which the online newspaper ascribed to him.

9. As though to outdo the sensational allegations in the online publication, the mainstream media in Nigeria has been alleging that Mrs. Diezani attempted to purchase a property on Hyde Park Street in London for a whopping amount that embarrassingly ranges from 12.5 million sterling pounds to 13 billion sterling pounds. This claim is utterly false and laughable, for the amounts mentioned are only in the imagination of the reporters. This property is quite attractive. It belongs to a well-known eminently successful Nigerian entrepreneur who would also find this allegation embarrassing as the intention to sell the property has neither been contemplated nor disclosed to any person.

10. It is worthy to note that despite all the frenzy over Mrs. Diezani Madueke, not even one reporter or journalist has tried to contact the family to verify any of the rumors they have published with reckless abandon. This may be because they know the stories are false, but it feeds the mood of the moment. Hence, the silence from Diezani all along. It is worth emphasising that Mrs Alison-Madueke was never arrested or detained, and her passport was never seized. She was merely invited, and she honoured it promptly.

11. The Madueke family, like most other families, have their challenges. For instance, Mrs. Diezani Alison-Madueke has been receiving treatment for cancer in the UK, which started while she was in office. The health crisis has unfortunately exacerbated in recent times. She completed months of chemotherapy just last week, and she is scheduled to undergo surgery next week in London.

The family has been bearing this challenge with prayers and as much grace and fortitude as possible; and would plead with all reasonable Nigerians to pray for her recovery so that she can face this allegation and give account of her stewardship. Yes, she can—and very well, too.

12. The Madueke and Agama families would want the decent public to know that neither Ugonna nor Somze or Abiye or anyone related to the two families was picked up or arrested or invited for questioning by anybody whatsoever. Ugonna’s father (the Rear-Admiral) has been in Lagos and working in his office.

The lies about his having travelled with a team of lawyers should please stop. The Madueke family has taken a decision on how to appropriately deal with those who are on a mission to spoil their hard earned family name.

Signed for and on behalf of the Madueke and Agama families.