Bakassi Freedom fighters to take over in Cross River State 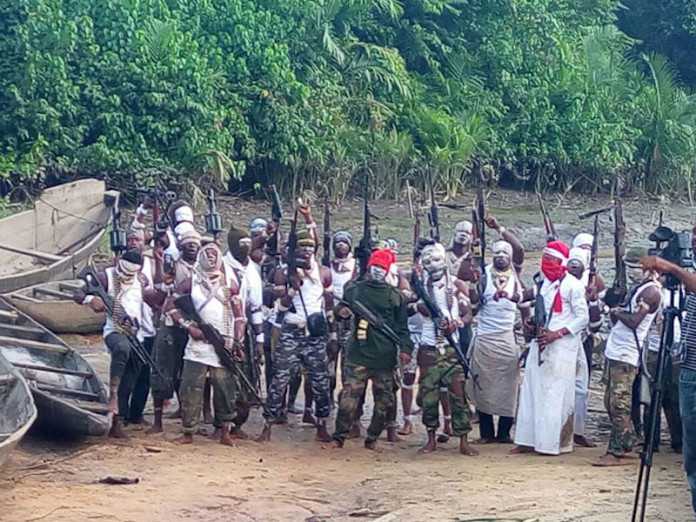 Bassey Inyang in Calabar and Senator Iroegbu in Abuja

Armed militias have taken control of two local government areas in Cross River State and displaced virtually every civil authority in the area, THISDAY has learnt. The militia, generally believed to be members of Bakassi Strike Force, had been operating in the area for some time. But they recently seized control of Bakassi and Akpabuyo local government areas, displacing both civil and traditional authorities in the councils.

It was reliably gathered that the elected chairmen of the two local governments had fled the area for several month now, while the councillors hold their legislative sittings in Calabar. The secretariats of both local councils have also been deserted by civil servants for fear of being kidnapped or attacked by the militants.

To try to stem the slide into anarchy, the state governor, Professor Ben Ayade, has appealed to President Muhammadu Buhari to extend the activities of “Operation Delta Safe”, a security taskforce protecting oil installations in the Niger Delta, to Cross River State. Ayade said his state should not to be isolated in the battle to keep the Niger Delta safe. He also promised to increase the firepower of the state’s security taskforce, “Operation Skolombo.”

Militancy has gripped Cross River State for the past few months. And militants are being blamed for an increasing wave of kidnapping, armed robbery, and other criminal activities, especially, in Calabar, the state capital.

But Bakassi and Akpabuyo local government areas, which share maritime boundary with Cameroon, recently became a lawless, anarchic zone in which militants rule. It was discovered that the militants collected rents and levies from people doing business in the council areas, which they termed “protection money”, a situation that has made many people to flee.
The militants are said to have also rendered the state judicial organs and the traditional institutions in Akpabuyo and Bakassi local governments impotent, as the militias now handle matters that should otherwise be handled by the conventional courts, village heads, clan chiefs, and paramount rulers.

A source conversant with the situation, but pleaded not to be named, said, “There is total anarchy there now, and people are actually running to Cameroon now for help. First of all, the local government chairmen in both places don’t go to office, and they have not gone to office over the past one and a half years. They have written, complained, begged, and appealed, to no avail.

“The legislatures in those places don’t meet at the local government headquarters. They hold their meetings in Calabar so as to fulfil the statutory requirements that they hold a certain number of meetings in a session.
“So, effectively, there is no governance in those areas.”

The source said the locals had made a failed bid to contain the armed men.
“The traditional institutions have tried to fight, but they can no longer sustain the fight. They don’t have guns, they don’t have money,” the source stated. “What we have now is that militants have set up a parallel government. They are the ones that resolve land disputes, they are the ones that resolve family disputes, and if husband and wife quarrel they go to militants. Of course, their methods are crude but effective.

“They rely on jungle justice, they cane people. Culprits pay fines of goats, drinks, and money.”
Though, as gathered, there are police posts and soldiers stationed in the areas, the security agents appear to be overwhelmed by the militants.

When contacted, the chairman of Akpabuyo Local Government Area, Mr. Patrick Ene Okon, refused to speak on the issue. But the chairman of Bakassi Local Government Area, Mrs. Edisua Usang Iso, admitted that militants were operating in her council area. She, however, denied that the activities of the militants were affecting the administration of the council. Iso said, though, the council had lost substantial revenue to their activities, the federal government should grant amnesty to them and incorporate them into the federal government’s amnesty programme for Niger Delta militants.

The Bakassi local government chairman, who spoke with THISDAY in Calabar, denied abdicating her duties and deserting the council secretariat, saying she goes to Bakassi whenever it is necessary.

However, confirming the occupation of the Bakassi area on Friday, when he addressed the press on the security situation in the state, Ayade vowed that the militants will be dislodged from the area.

The governor said, “The three kingpins, we have identified their homes, we have the coordinates of their armoury, we have a clear picture of their modus operandi and we are working on a massive attack. I speak as the United States would do. They let you know that they are coming for you and they will come after you.

“We are coming after them. We know all the militants who are now parading and taking full occupation of Bakassi. We would free the people of Bakassi. The people of Bakassi have seen enough pain. Lands taken, oil wells taken, reduced to want in spirit, body and economy, we cannot afford also to create a perilous nightmare for the same people.”

Addressing newsmen yesterday at the Peace Park, Calabar, shortly after a five-hour security council meeting, the governor, accompanied by service commanders in the state, as well as his security adviser, unveiled a new security agenda aimed at containing the emerging threat in the state. He added, “Cross River is known as the home state of tourism, Calabar is known as the destination for African hospitality. Anything that will impinge on the integrity, knowledge, wealth and values of the state must be resisted by Cross Riverians and Nigerians.”

He explained that as part of the new strategy, his administration had decided to increase the budgetary provision for security, saying, “We will provide additional 30 vehicles to cover Calabar city centre, increase the firepower of ‘Operation Skolombo,’ expand our security network and introduce Cross River State Homeland Security Service that will provide intelligence report to Operation Skolombo and other security agencies in the state.”
Ayade disclosed that a total of 47 criminals had been arrested in the wake of the recent security threats in the state capital, saying, “None of those arrested are Cross Riverians and that clearly underscores the fact that the culture, integrity, character and honour of the people of the state have not changed.”

On cultism, which the governor said was beginning to resurface, he warned, “We, as an administration, are going to take deliberate steps to ensure that any person who is in any cult and is in government is thrown out.”
Piqued by intractable communal clashes in the state, which have resulted in the wanton destruction of lives and property, Ayade ordered the immediate withdrawal of the certificates of recognition of traditional rulers in the affected communities.

He hinted that the state would be divided into 18 cells for purposes of security, saying, “Nine entry and nine exit points have also been identified.”

However, the Defence Headquarters at the weekend denied the takeover of any local government area in Cross River State by militants. The Director of Defence Information, Brig-Gen. Rabe Abubakar, in response to THISDAY enquiry yesterday, said such development was not true. He vowed that the military, in collaboration with other security agencies, will crush any attempt to temper with the territorial integrity of the country.

Abubakar said, “The information about parallel government is a rumour and a dream of those unpatriotic elements and is not true. The military and other security agencies will not leave any stone unturned in exploiting any necessary measure in ensuring the indivisibility of our nation.”

He assured members of the public of the commitment of the Nigerian armed forces to the safeguarding of “the territorial integrity of Nigeria, no matter what it takes us to achieve in a more professional manner.
“Our military activities will go on in all crisis identified locations and areas in line with our constitutional mandate and our rules of engagement.”

In a related development, Ayade and the service commanders in the state at the weekend embarked on “operation show of force” through major roads and streets of Calabar.
Briefing newsmen shortly after the exercise, Ayade explained that it was a deliberate measure to let the miscreants know that his team was in control of the security situation.

He said, “We are out here as a show of force to demonstrate that we are in absolute control and we are going to keep Calabar totally safe. We have done a complete surveillance of all the possible routes, all the water areas through which these criminals escape.

“We know who they are, the security and intelligence report has shown clearly the people who are behind all these activities and I can assure the people of Cross River State that Calabar is, indeed, peaceful and they should go about their legitimate businesses peacefully.”

On measures to sustain the exercise, the governor explained, “As a fallout of our security meeting yesterday (Friday) and today, we will make adequate budgetary provision, reduce some of our spending while transferring some of the overheads to guarantee sufficient ammunition as well as other security and logistics support.”
Commenting, the Cross River Commissioner of Police, Jimoh Ozi-Obeh, assured that his men will continue to protect lives and property in the state. “Those who have legal businesses should go about them peacefully, but those who have illegal businesses should run away,” Ozi-Obeh warned.

The state security adviser, Mr. Jude Ngaji, expressed the state government’s readiness to tackle the security menace, assuring, “In a couple of days, the security challenge being experienced in the state will be a thing of the past.”