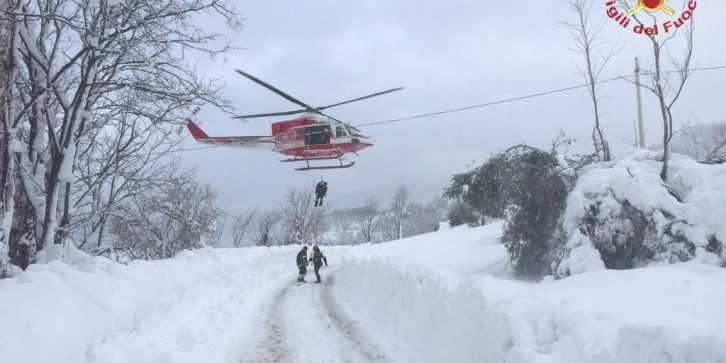 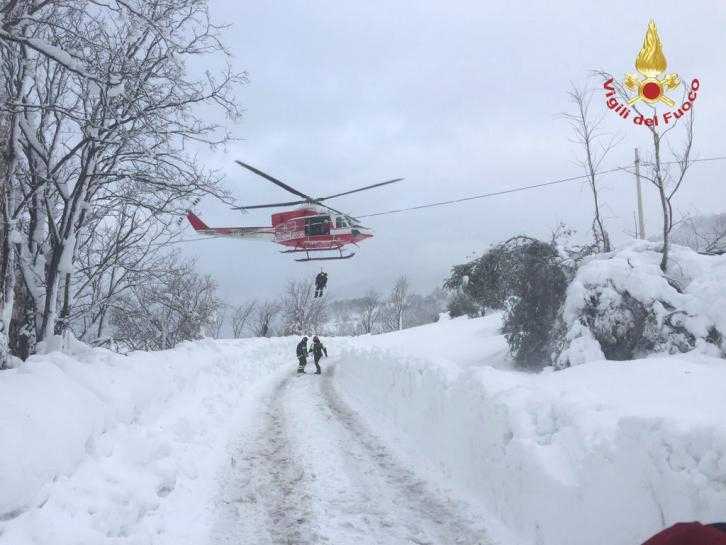 PENNE, Italy A huge avalanche ploughed into a luxury mountain hotel in central Italy after a series of strong earthquakes rattled the area, and up to 30 people might be buried under the snow, officials said on Thursday.

Rescue workers using flashlights on their helmets battled blizzard conditions during the night to reach the isolated hotel on skis. They arrived in the dark to find most of the four-storey structure submerged under a mountain of snow and debris.

“Around 30 people are unaccounted for, between guests and workers at the Hotel Rigopiano in Farindola,” Fabrizio Curcio, head of Italy’s civil protection department, told reporters.

Italy’s ANSA news agency reported that one body had been recovered, but there was no immediate confirmation of this.

More than 12 hours after the wall of snow smashed into the four-star hotel, which is some 1,200 metres (4,000 ft) above sea level, only two survivors had been accounted for.

“I am alive because I went to get something from my car,” one of the two, Giampiero Parete, told medical staff, according to la Repubblica website.

The rescue operation was hampered by up to 5 metres (16 ft) of snow which has fallen on the Gran Sasso mountain range in the central Abruzzo region in recent days, blocking access roads.

“We haven’t been able to do too much. The structure has collapsed. It’s more like a pile of rubble than a hotel,” said Antonio Crocetta, a member of the Alpine Rescue squad who was on the scene.

“What is left of the hotel is in danger of collapse. The hotel is almost completely destroyed. We’ve called out but we’ve heard no replies, no voices. We’re digging and looking for people,” he told Reuters speaking by telephone.

A base camp for rescue workers was set up in the town of Penne, some 10 km (6 miles) away, where ambulances waited for earth-moving vehicles to clear the winding, snow-clogged road leading to the hotel.

The avalanche collapsed part of the four-storey hotel, which had 43 rooms, shunting it some 10 metres (30 ft) down the hill, according to media reports.

The disaster struck on Wednesday evening, just hours after four earthquakes with a magnitude of above 5.0 hit central Italy, sparking fears about possible avalanches.

The first rescuers only managed to arrive at 4.30 a.m. (0330 GMT) after they had to ski through a heavy snow storm to reach the site. After dawn broke, emergency services sent in helicopters.

“We’re dropping our rescue units down by helicopter and they are starting to dig,” said Luca Cari, spokesman for the national fire brigades.

An aerial shot of the hotel released by the fire brigade showed just the last floor and the roof visible above a thick blanket of snow.