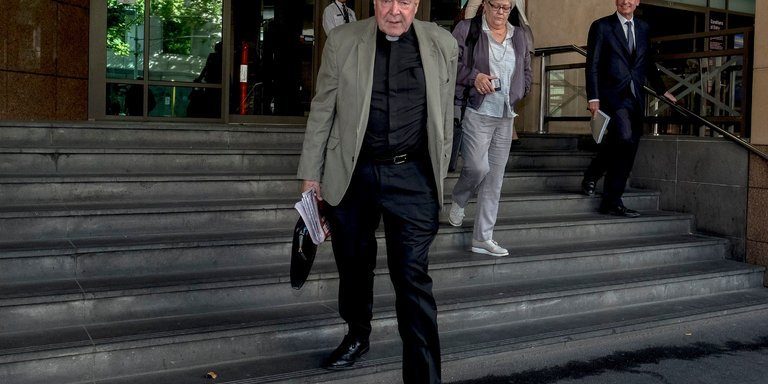 MELBOURNE, Australia — The contentious committal hearing of Cardinal George Pell, the Catholic Church’s third highest-ranking priest, adjourned on Thursday, as a magistrate prepared to decide whether the case will go to trial.

The cardinal, the Vatican’s de facto finance chief, has been charged with committing “historical sexual offenses.” He is the most senior member of the Catholic Church ever to face such allegations, and the outcome of the hearing will mark a significant moment for the Vatican as it grapples with the problem of clerical sex abuse.

The magistrate, Belinda Wallington, is expected to announce in mid-April whether the cardinal will be tried.

While Cardinal Pell has been accused of decades-old sexual offenses, further details of the charges have not been made public for legal reasons. Australia’s contempt standards, among other restrictions, prohibit journalists from reporting details of some criminal proceedings.

A government commission looking into child sexual abuse by the clergy had previously accused Cardinal Pell of mishandling sexual misconduct allegations against clergy members while he served as leader of the archdioceses of Melbourne and Sydney.

Allegations later surfaced that the cardinal himself had been involved with abuse decades ago. Pope Francis granted Cardinal Pell a leave of absence to contest the charges, which the cardinal has vehemently denied.

Fiery exchanges during witness testimony this week typified the tone of the hearing, and they have shed light on the seriousness of the yet-to-be-detailed charges. On Wednesday, Ms. Wallington asked the cardinal’s attorney Robert Richter to stop shouting at her before she denied his request that she recuse herself from hearing the case.

The hearings have been punctuated by similarly heated exchanges, many of which have involved Mr. Richter, a lawyer known for a confrontational style of cross-examination and for commanding a five-figure daily fee.

What you need to know to start your day in Australia, delivered to your inbox.

Earlier Wednesday, Mr. Richter told the court that the task force set up to investigate potential offenses by the cardinal was an “operation looking for a crime.”

He suggested that the police may have avoided specific lines of questioning while collecting evidence and statements that led to the charges against the cardinal.

“It would be horrible if an investigator decided not to pursue an obvious line of questioning just because he was afraid that the answers might destroy his case,” Mr. Richter said to Superintendent Paul Sheridan, the detective who led the investigation into the cardinal for the last two years.

“I would agree with that,” replied Mr. Sheridan, who stood for the entirety of his cross-examination, angling his body and eyes away from Mr. Richter. At several points, Mr. Richter mentioned that he and Mr. Sheridan had known each other for a long time.

During several hours of testimony, Mr. Richter pressed Mr. Sheridan on apparent inconsistencies in his testimony, at one point suggesting that the cardinal’s robes were made in such a way that events alleged to have taken place at a Melbourne cathedral could not have happened.

He also argued that “acts of appalling seriousness” alleged to have occurred on a mountaintop, on an altar and at a 1978 screening of “Close Encounters of the Third Kind” could not have happened, citing inconsistencies in the accuser’s timeline.

It was on this point that Ms. Wallington questioned Mr. Richter’s own proposed timeline, leading him to further argue his case with her.

It was then that Mr. Richter asked the magistrate to “disqualify herself from further hearing this matter, on the basis of a biased view of the evidence.”

On Tuesday, Mr. Richter accused the journalist Louise Milligan of omitting key reporting in a television report on the accusations and a book she published last year, “Cardinal: The Rise and Fall of George Pell.”

The court had previously heard that statements some complainants gave to the police differed somewhat from those given to Ms. Milligan during her reporting. As is common in such cases, her book was removed from bookstores in the state of Victoria, where the trial is taking place.

“She distorted what went to the public,” Mr. Richter said of Ms. Milligan’s coverage. “I would put to her that she distorted it even more in her book, so as to poison the public’s mind against Cardinal Pell,” he added.

“I completely and utterly reject that,” Ms. Milligan said.

“Of course you would,” said Mr. Richter.

Ms. Milligan later pushed back on Mr. Richter’s characterizations of some accusers, saying that abuse victims were unfairly “torn apart by people like you” in courts.

Mr. Richter later described some of Ms. Milligan’s documented exchanges with her sources as “charming, if not flirtatious,” which she dismissed as insulting.

“I think that is an absolutely sexist assertion,” she said.

“It’s hard to predict how long it will be — it depends on the law calendars,” said Mark Nolan, a professor of criminal law at the Australian National University.

If the magistrate rules that there is insufficient evidence to send the case to trial, Victoria’s director of public prosecutions can still decide to try Cardinal Pell.

Want more Australia coverage and discussion? Join us in our Facebook group, sign up for the weekly Australia Letter and start your day with the Australian Morning Briefing.