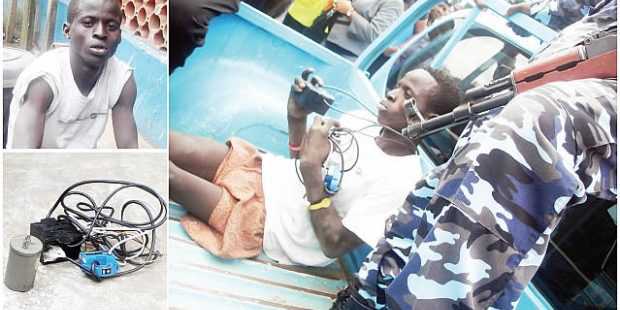 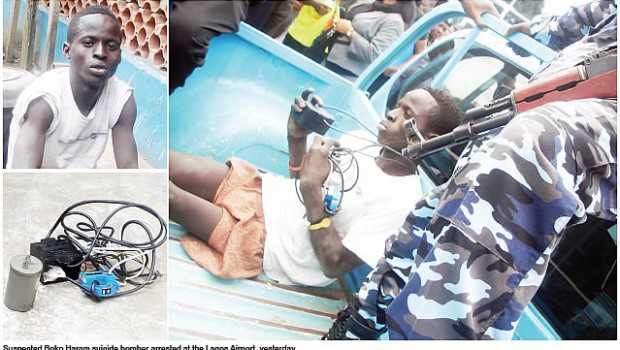 An attempt to bomb the Centrex Unit of the Nigerian Airspace Management Agency, NAMA, at the Murtala Mohammed International Airport, Lagos by a suspected Boko Haram member was yesterday foiled by security operatives.

A source close to the airport said that the unidentified suspect was arrested around midday by the security operatives when he attempted to detonate the explosive device strapped to his body.

According to reports, the suspect appeared to be a handicapped beggar soliciting alms within the vicinity but his suspicious behaviour aroused the curiosity of the officers who prevented the suspect from detonating the explosive device at the complex.

On a closer look, the suspect was found to be actually handicapped, but had a suspected suicide bomb vest strapped around his waist.

Another source close to the agency insisted that the vigilance of the agency’s security officers prevented a disaster as the suspected bomber was immediately arrested before he could detonate the device.

The source said: “Our security men were curious of his presence at the place and they queried him, but the explanation he gave was unconvincing. So, they kept an eagle eye on him.

“A few seconds later, they noticed that he was struggling to press an object which was wrapped around him. They had to swoop on him and they discovered a deadly explosive on him.

“Why he chose NAMA and airport is still unknown to some of us here.” Our correspondent, however, confirmed that the suspect was undergoing interrogation at the police station. The Commissioner of Police, Airport Command, Mr. Waheed Salahu, declined to comment, saying that it would be too premature to talk with journalists.

But a source close to the command confirmed the story to our correspondent. The source, however, could not confirm if the suspect was a member of the deadly Islamic sect, Boko Haram, but confirmed that the explosive devices were on the suspect as at the time of arrest.

Also, NAMA General Manager, Public Affairs, Mr. Supo Atobatele, in a statement yesterday said the suspect was on ground making phone calls along the Airport Road, close to CENTREX, an annex office of NAMA when he was apprehended by security personnel.

“The basic truth, however, is that the said suspect was on the ground making phone calls along the airport road close to CENTREX, an annex office of NAMA when the agency’s security personnel accosted him of his presence.

“His incoherent explanation exposed him to the security personnel who later found on him some devices suspected to be explosives. “He was subsequently handed over to the Airport Police Command for further investigation.”

NAMA Managing Director, Mr. Ibrahim Abdulsalam, in his reaction commended the security personnel for their vigilance and prompt arrest of the suspect.