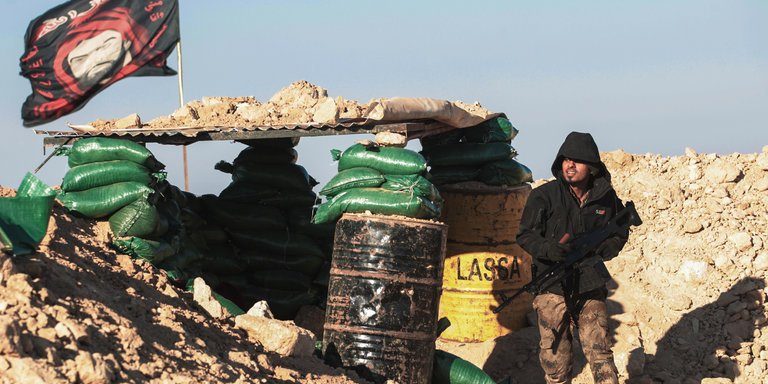 On the Road to Sinjar, Armed Men With Shifting Allegiances Decide Who Can Pass

Few American reporters have spent more time reporting from Iraq in the last 15 years than Alissa J. Rubin, who served as both a correspondent and the Baghdad bureau chief for The New York Times at the height of the conflict. Rubin returned to Iraq in 2014 to cover the rise of the Islamic State and was severely injured in a helicopter crash on Mount Sinjar while reporting on targeted attacks against the Yazidi population. She once again returned to the region in January 2018 for a coming article in The Times Magazine. On a drive to the Iraq-Syria border during her last trip, Rubin found that competing military and militia groups had set up checkpoints everywhere, making travel increasingly difficult. The following is an account of the nine hours it took her and her companions to drive 130 miles through more than 26 checkpoints.

We were headed from Dohuk, a city in Iraqi Kurdistan, to Sinjar, near the Syrian border — a journey, at slightly more than 130 miles, that should be traversable in three hours. Before leaving, I asked around about the route. Answers were ominous. “It’s impossible to get there,” one person said. Another seconded that we’d never get through. “There are 40 checkpoints,” another man said.

A professor described a circuitous route. “I went around through Syria, but I don’t think you can do that.”

It seemed that although open conflict was over, the region was partially locked down by a heavy and confusing armed presence, in places with factional undertones. Driving from east to west, the groups governing the roads morphed from the Peshmerga into the Iraqi Army into a variety of Shiite-connected militias and finally into militias run by the Syrian Kurds and Turkish Kurds. Each had their own flags, alliances and reasons for being there.

I departed in the freezing fog of a winter morning with two companions: Kamil Kakol, a seasoned multilingual Iraqi journalist, and Khalaf Shamdeen, a Yazidi driver who spoke no English but could translate the Yazidi dialect into Kurdish. He was from Sinjar and knew back roads and shortcuts.

The first checkpoints were run by the Peshmerga, the Kurds’ fighting force. We were waved through. Our names had been sent to each Kurdish-controlled checkpoint, just as Kurdish officials had promised.