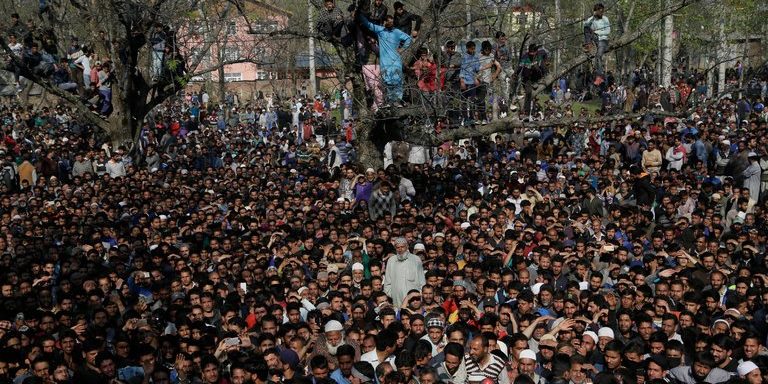 At least three soldiers and four civilians also died, and about 70 other people were wounded in the army crackdown in the district of Shopian, according to the Kashmir authorities.

Army officials called the operation a major success. “It is a special day for our forces,” Lt. Gen. A. K. Bhatt of the Indian Army said.

Kashmir — caught in a territorial dispute between the Hindu-majority India, which controls much of the territory, and the Muslim-majority Pakistan — has endured brutal conflict for decades.

A violent secession movement that started in the late 1980s saw many guerrilla fighters crossing the border from Pakistan into India. In turn, India increased its military presence in the region to try to quell the uprising.

The insurgency in Kashmir accelerated after Indian forces killed a charismatic militant leader, Burhan Muzaffar Wani, in July 2016. Since then, the frequency of protests against Indian rule has increased. This year, dozens of people, including many civilians, have been killed in the fighting.

On Sunday, as a gun battle raged in the village of Draged-Sugan, where at least seven of the militants were killed, protesters took to the streets to demonstrate against Indian security forces.

Many of the protesters threw stones at the security personnel in an apparent attempt to provide cover for the militants, members of the Hizbul Mujahedeen and Lashkar-e-Taiba groups.

“For as long as the last Kashmiri is alive, we will come out to support militants,” said Numaan Ahmad Malik, 27, a college student, who was wounded in the clashes and was treated at a hospital.

Indian officers retaliated by firing pellet guns and rifles with live ammunition into the crowd, and the state government shut down the internet in an effort to prevent further protests from being organized online.

Many of the injured on Sunday sustained bullet wounds or pellet injuries, officials said. Shesh Paul Vaid, the top Indian police officer in the region, said that 213 militants were killed last year — the largest number in seven years.

Around the village of Kachdora, where another gun battle unfolded on Sunday, shots and tear gas pierced the afternoon.

“For every 10 killed, 20 more will join until this land is freed from Indian occupation,” said Imtiyaz Ahmad, a protester in Kachdora.