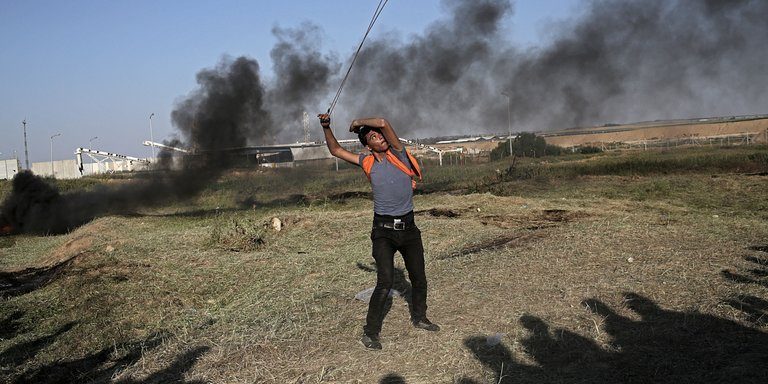 GAZA CITY — Israel will target militant groups inside Gaza if violence along the territory’s border with Israel drags on, the chief military spokesman warned on Saturday, a day after 15 Palestinians were killed by Israeli fire in the area’s deadliest violence in four years.

Friday’s mass marches were largely led by Gaza’s ruling Hamas group and touted as the start of a six-week-long protest campaign against a stifling decade-old blockade of the territory.

Prime Minister Benjamin Netanyahu of Israel congratulated soldiers Saturday for allowing the rest of the country to celebrate the Passover holiday safely.

“Israel is acting determinedly and decisively to protect its sovereignty and the security of its citizens,” he said.

Palestinian health officials said 15 Palestinians were killed by Israeli fire and more than 750 hit by live rounds Friday, making it the bloodiest day in Gaza since the 2014 cross-border war between Israel and Hamas.

On Saturday, the chief army spokesman, Brig. Gen. Ronen Manelis, said that while thousands of Palestinians approached the border Friday, those engaged in stone-throwing were in the hundreds.

General Manelis denied soldiers used excessive force, saying those killed by Israeli troops were men between the ages of 18 and 30 who were involved in violence and belonged to militant factions. He said Gaza health officials exaggerated the number of wounded, and that several dozen at most had been injured by live fire, with others suffering from tear gas inhalation or other types of injuries.

Shifa Hospital in Gaza City received 284 injured people Friday, the majority with bullet injuries, said a spokesman, Ayman Sahbani. He said 70 were under the age of 18.

Mr. Sahbani said 40 surgeries were performed Friday and that 50 were planned Saturday. “These are all from live bullets that broke limbs or caused deep, open wounds with damage to nerves and veins,” he said.

General Manelis said that Hamas and other Gaza militant groups are using the protests as a cover for staging attacks. If violence goes on, “we will not be able to continue limiting our activity to the fence area and will act against these terror organizations in other places too,” he said.

The border protests were seen as an attempt by Hamas to break the border blockade, imposed by Israel and Egypt after the Islamic militant group seized Gaza in 2007 from forces loyal to its rival, President Mahmoud Abbas of the Palestinian Authority.

At the United Nations, Secretary General António Guterres called for an independent investigation, while Security Council members urged restraint on both sides.