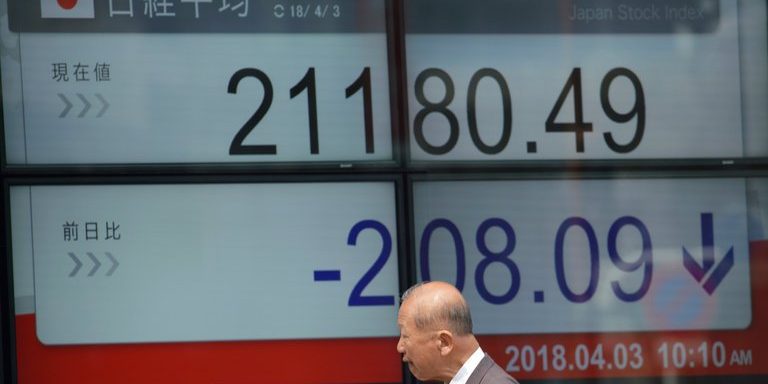 HONG KONG — Asian markets fell on Tuesday after a tough day on Wall Street but were spared the full extent of the pain felt in the United States, thanks in part to a dearth of big technology names that trade in the region.

Markets in Asia were down less than 1 percent by midday after a sharper drop the day before in New York, suggesting that Wall Street’s painful Monday would not turn into a global rout. Underlining that point, futures that track major United States stock indexes were modestly higher in Asian trading on Tuesday, meaning that many investors see a better day coming.

For the most part, global markets are responding to the same signals. Investors around the world have been unnerved by the prospect of a full-blown trade war between the United States and China as the two erect tit-for-tat trade barriers.

More generally, global markets have risen roughly in tandem over the past couple of years as the economies of the United States, Europe and China have appeared to all be humming along together at a healthy clip for the first time in years. After such a long run-up, many investors naturally wonder how much longer the good times will last.

But Monday’s slump in the United States has another driver that other world markets lack: big-time technology companies.

Amazon, Facebook, Microsoft, Intel and Tesla were among the major contributors to Monday’s stock slump on Wall Street. Amazon faces pressure from President Trump, while Facebook continues to grapple with privacy concerns and Tesla has been hit by a succession of negative headlines.

Tech shares were among the worst performers in other markets too, like China, Japan and Hong Kong. But the world’s biggest technology companies primarily trade in the United States.

China is home to digital giants like the Alibaba Group, the online retailer. But many Chinese technology companies, like Alibaba, trade in the United States as a way to reach global investors. Alibaba’s shares joined the American tech rout on Monday, falling more than 3 percent, while shares of the Chinese search company Baidu fell more than 1 percent.

One notable exception to the trend toward trading in the United States is Tencent Holdings, a Chinese social media and gaming conglomerate that trades in Hong Kong. Its shares were down less than 1 percent midday on Tuesday.