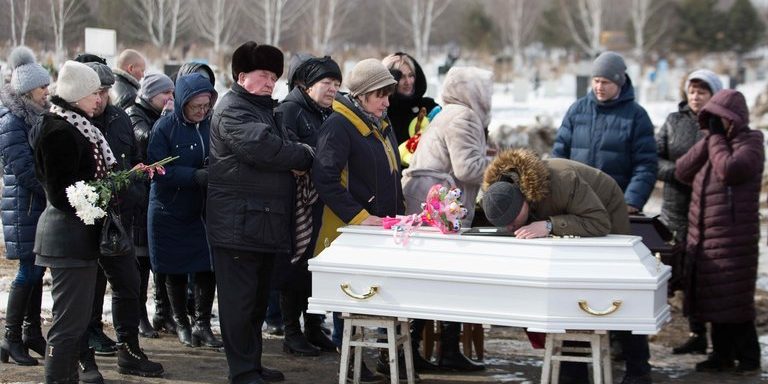 Russia was in an official state of mourning on Wednesday as funerals began for the 64 victims of a fire that swept through a mall in the Siberian city of Kemerovo on Sunday. The tragedy that has led to public outrage over a perceived lack of transparency and accountability.

Funeral ceremonies were held at three churches in Kemerovo, 2,000 miles east of Moscow, local news outlets reported. In the morning, the caskets bearing the remains of two children and one adult were brought to a cemetery following services at Holy Trinity Church, the TASS news agency reported.

“This tragedy is made even worse by the fact that children became victims of the blaze,” said a priest at another service in an Orthodox church, Reuters reported. “Great grief is upon all of us and there are no words that would express our common pain.”

Outside the burned-out shopping mall, called Winter Cherry, stuffed toys were left beside a makeshift shrine for the victims, 41 of them children. Other mourners came bearing candles and food, local news outlets reported. Impromptu memorials have appeared across Russia, on the central squares of various cities where crowds assembled Tuesday evening for silent vigils in honor of the Kemerovo victims.

“This is not a political rally. Let’s meet without flags and banners,” Nikolai Solodnikov, an organizer of the St. Petersburg rally, wrote on Facebook. “We’ll simply remind ourselves that we are one country. In both joy, and in such terrible grief.”

While official Russia lowered flags and put on black suits, the anticorruption campaigner Aleksei A. Navalny mounted a blistering attack on President Vladimir V. Putin and his system of government, saying that graft and unaccountability were to blame for the Kemerovo fire.

In a video posted on his website, Mr. Navalny said that Russia had 220,000 officials responsible for fire prevention but had one of the worst death rates from fires in the world.

“So long as Russia does not start a real fight against corruption, we will continue to pay with the lives of children for all the bribes taken by Putin’s officials,” Mr. Navalny, who was barred from competing against Mr. Putin in Russia’s March 18 presidential election, said.

In Moscow, a vigil over yet another avoidable tragedy in a country with a notoriously poor fire safety record took on an overtly political tone, with an incensed crowd chanting “Russia without Putin!” and “Corruption kills!”

And in Perm, a city near the Ural Mountains where a nightclub fire in 2009 killed 156 people, the deadliest blaze in Russia’s post-Soviet history, more than 500 people gathered beside a memorial to those victims.

“Why are such tragedies happening again and again?” one woman told the tabloid Komsomolskaya Pravda. “Why does no one give a damn about people? Everyone wants more money, without a care about safety.”

The Emergencies Ministry concluded its search of the scene Wednesday afternoon, TASS reported. The ministry said that 27 of the 64 victims found so far had been identified, some only by DNA analysis. Many residents have said they think that the authorities are deliberately understating the death toll.

An investigation is underway. Officials have cited an electrical short circuit as the most likely cause of the fire, though arson has not been ruled out. The authorities have arrested Nadezhda Suddenok, the manager of the mall, on charges of negligence, TASS reported. Sergei Antyushin, a security guard, has been charged with failure to activate the fire alarm system.