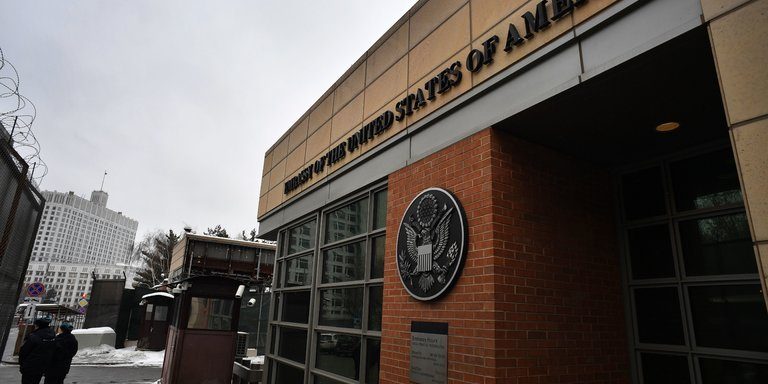 MOSCOW — The scope of Russia’s retaliatory expulsions of Western diplomats grew clearer Friday as the Kremlin summoned 23 ambassadors to issue eviction orders, while diplomatic veterans questioned how the United States Embassy, with a greatly reduced staff, could perform basic tasks.

The ambassadors, mostly European, called to the Kremlin Friday were told that their diplomatic staffs would be cut by the same number of people as had been lost by Russian embassies in their own capitals during a recently coordinated ouster of more than 150 Russian diplomats.

On Thursday, Russia said it would expel 60 American diplomats.

The expulsions and counter-expulsions, following the crisis over the poisoning of a former Russian spy, Sergei V. Skripal, and his daughter in England were neither the first in recent times nor the most punishing. But the cumulative impact of the cutbacks for the United States in particular left many veteran diplomats wondering how its embassy could operate.

Much of the burden is expected to fall on Washington’s new ambassador to Moscow, Jon M. Huntsman Jr., who took over an embassy already struggling to function after an order by the Kremlin last summer that it dispense with 755 employees in response to sweeping American sanctions for Russia’s election meddling.

The United States will still have an ambassador in Moscow after this, as will Russia in Washington, so high-level contact on potentially calamitous matters of state should continue, as it did at the height of the Cuban missile crisis, when the Kennedy administration helped avert nuclear war through its contacts with the Soviet ambassador Anatoly F. Dobrynin.

Intelligence officers working under “official cover” as diplomats were especially targeted. But with the reduction in numbers, the wheels of basic diplomacy, involving things like visas, consular services, cultural events and simply talking to people, are grinding ever more slowly and, in some cases, coming to a halt.

“The embassy is struggling to do basic operations. This latest round will hurt. Morale, of course, is also very low,” said Michael A. McFaul, who served as ambassador in Moscow from 2012 to 2014.

Even before this week’s expulsions of American diplomats, the wait for a United States visitor’s visa in Moscow was among the longest in the world. It now takes 250 days just to get an appointment with the visa section, compared with four in Beijing and 31 in New Delhi.

“What we call diplomacy now is an extremely complex business — it’s culture, visas, consular services, transport, business and trade,” said Stefano Stefanini, former Italian ambassador to NATO and a diplomat in Moscow and Washington. “The traditional diplomacy, the capacity to talk politics with Moscow, won’t be diminished by this tat-for-tat. But of course the workload for everyone will increase.”

Kori Schake, a former Pentagon and White House official now at the International Institute for Strategic Studies in London, said that continuing diplomacy in embassies really did matter. “Most of the high policy stuff can be done in Washington,” she said. “But what does get done and is especially important in authoritarian societies like Russia is to have American diplomats out and about, supporting civil society and independent journalists and engaging personally, so that people’s experience with Americans is different from what their government tells them.”

On Thursday morning, a few hours before the Russian foreign minister summoned Mr. Huntsman to inform him that he was losing yet more staff, the United States Embassy posted a video of Mr. Huntsman on its Twitter feed.

“These are difficult times in the Russia-U.S. relationship,” he said, adding optimistically that “the doors to dialogue remain open.”

The opening, however, is growing increasingly narrow, not only because relations have become so strained but because there are simply fewer and fewer people on the ground to stop the door from slamming shut.

Many of the tasks that occupied the time of diplomats in the past, said Jeremy Shapiro, a former United States diplomat now at the European Council on Foreign Relations, “can proceed without having an embassy. That’s modern life. You don’t need an embassy to do banking across borders or trade.”

But, he added, you do need a functioning embassy to issue visas and provide consular services to Americans abroad, who lose passports, get mugged or end up drunk or in hospitals. “It’s not diplomacy, but it’s super-important,” he said.

Ejecting diplomats and closing consulates, as the United States has been ordered to do in St. Petersburg, “makes it harder for Russians to come to America and vice versa.” It might not be diplomacy in the tradition of Henry Kissinger, but it provides “the fine lines of the relationship.”

Charles A. Kupchan, who was Europe director of the National Security Council under President Obama, said that “expulsions carry greater symbolic weight than substantive weight — diplomacy will go on even though Russians have fewer diplomats in the U.S. and Americans and Europeans fewer in Russia.”

But there are tangible costs, he said. “The parties lose some of their eyes and ears, so the quality of the reporting goes down. It’s not just intelligence but day-to day political and economic reporting: What’s the buzz in the street, what do interlocutors say. And consular services do get hit.”

Russia’s order on Thursday that Washington close its consulate in St. Petersburg, by far the biggest of three American consulates in Russia, will throw more sand in the machinery of diplomacy as it is really practiced. It will also leave Washington without eyes and ears in Russia’s second most populous city and its principal gateway to the West.

Russia wants the consulate shut in retaliation for Washington’s demand earlier in the week that Moscow close its own consulate in Seattle, which was seen as a nest of spies gathering secrets from Boeing and a nearby naval base, not to speak of the area’s high-tech firms.

The United States mission in St. Petersburg is unlikely to have been a haven for espionage: It was notoriously insecure. With walls connected to Russian-occupied buildings on both sides, it is an unclassified operation without Marine guards or a National Security Agency station, said a former American diplomat who worked there during the Cold War. Washington has been asking for a new location for years.

Simon Schuchat, a former diplomat in the Moscow embassy’s economics section, recalled how haphazard and unnerving the process of Russia weeding out alleged spies was during a round of expulsions in 2001. Inevitably, Moscow ordered out diplomats who had no connection to espionage.

“They tended to go for people with better language skills,” Mr. Schuchat said, adding that they “missed many spies and included many non-spies. We had a week or so waiting for the list to be issued.”

The Russians, he said, also took care not to expel diplomats “from sections they thought were useful for them,” and left intact a large NASA presence.

One possible silver lining in the latest ruckus is that relations have deteriorated so much in recent years that American diplomats in Moscow have fewer tasks than they did; a once-sprawling canvas of diplomatic and other business ties between Russia and the United States has withered since President Vladimir V. Putin returned to the Kremlin in 2012 after a four-year stint as prime minister.

The embassy’s workload was slashed by a ban on Americans adopting Russian orphans — cutting the workload of consular officials handling immigrant visas — and a bar on American development workers with the United States Agency for International Development operating in Russia.

A near halt to once regular congressional junkets has also saved embassy staff from having to give briefings, arrange meetings and host cocktail parties.

All the same, there are still plenty of matters, like counterterrorism, space exploration and drug control, on which Moscow and Washington sometimes collaborate. The Department of Homeland Security, the Drug Enforcement Administration, NASA and the Department of Agriculture all have officials in the Moscow embassy.

Information Moscow, a handbook of foreign entities operating in Moscow, lists 108 accredited American diplomats, but the total number of Americans working at the embassy has been much higher.

The last publicly available detailed breakdown, contained in a 2013 report on the Moscow mission by the State Department’s Office of the Inspector General, put the total number of direct-hire American staff at the embassy at 289, alongside 867 foreign staff, mostly Russians working as drivers, guards and in administration and other support jobs.

Most of the Russians have now gone, axed last July on an order from Mr. Putin in retaliation for sweeping sanctions imposed by Congress. Their departure put such a strain on the embassy that it suspended for a time one of its most basic functions, the processing of visas.

Visas are now again being issued, but so slowly that they have become yet another point of friction between the two countries, instead of a way to narrow the gulf that separates them.

Maria Zakharova, the Russian Foreign Ministry’s fiery spokeswoman, recently accused Washington of “playing dirty” by stalling on visas for a Russian wrestling team that had hoped to compete in a tournament in Iowa City.

Their inability to get visas, she said, was “extremely outrageous.” She said the American embassy had told the Foreign Ministry that it could not process the wrestlers’ visas because of staff cuts demanded by Russia, which she scoffed at as an excuse to keep Russians out of a world championship.

An American embassy spokesman declined to comment on why the visas had not been granted but told Russian media this week that the embassy had been placed under “significant constraints” by the Russian Foreign Ministry and “could not accommodate all their many requests at all times, particularly for large groups.”

Such niggling issues, while not involving war and peace, highlight just how even routine matters normally handled easily by an embassy have become fuel for mutual recrimination and an ever-worsening climate of hostility.