As Rebels Move Out of Colombia Drug Trade, Corporations Look to Move In 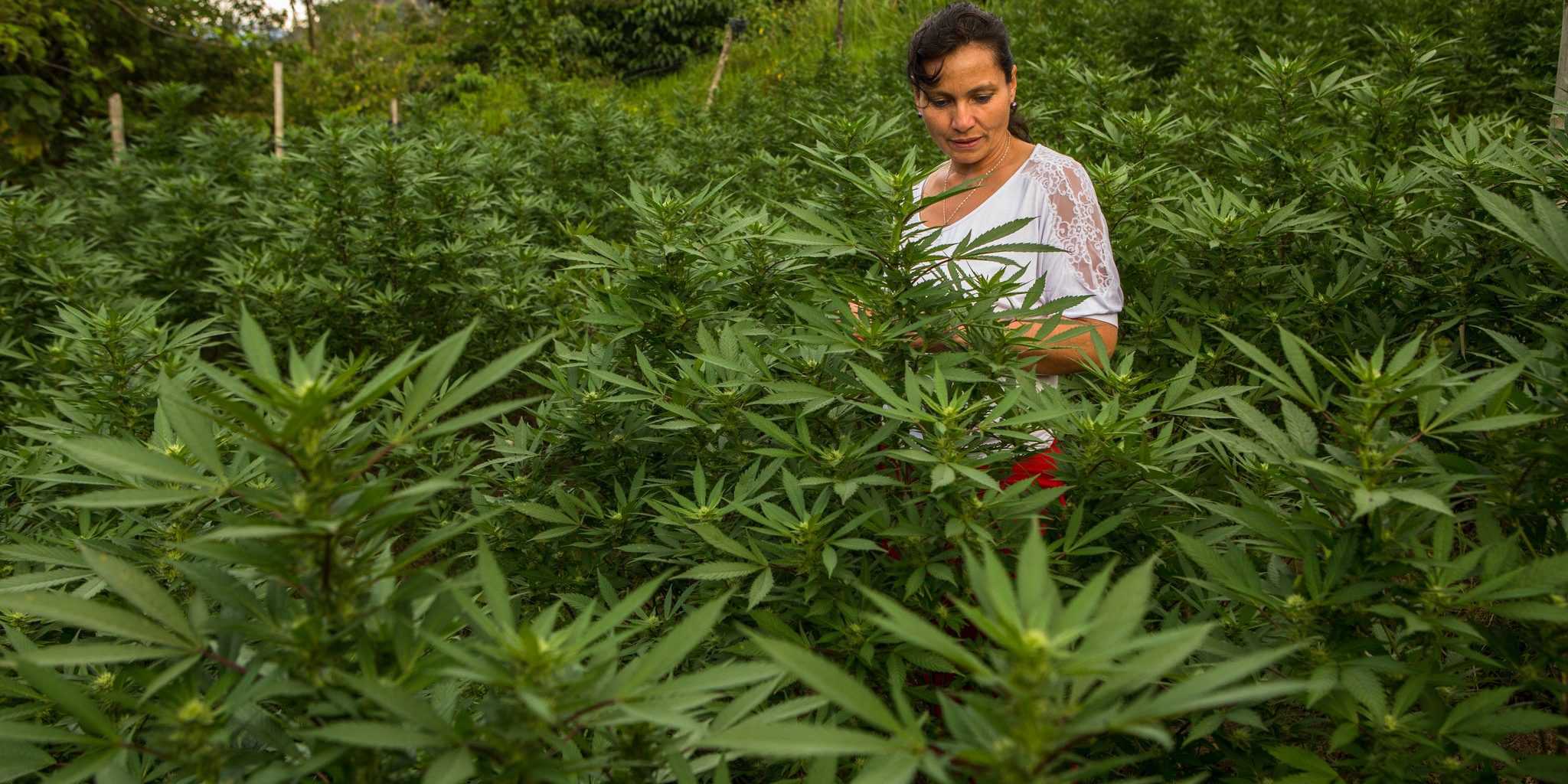 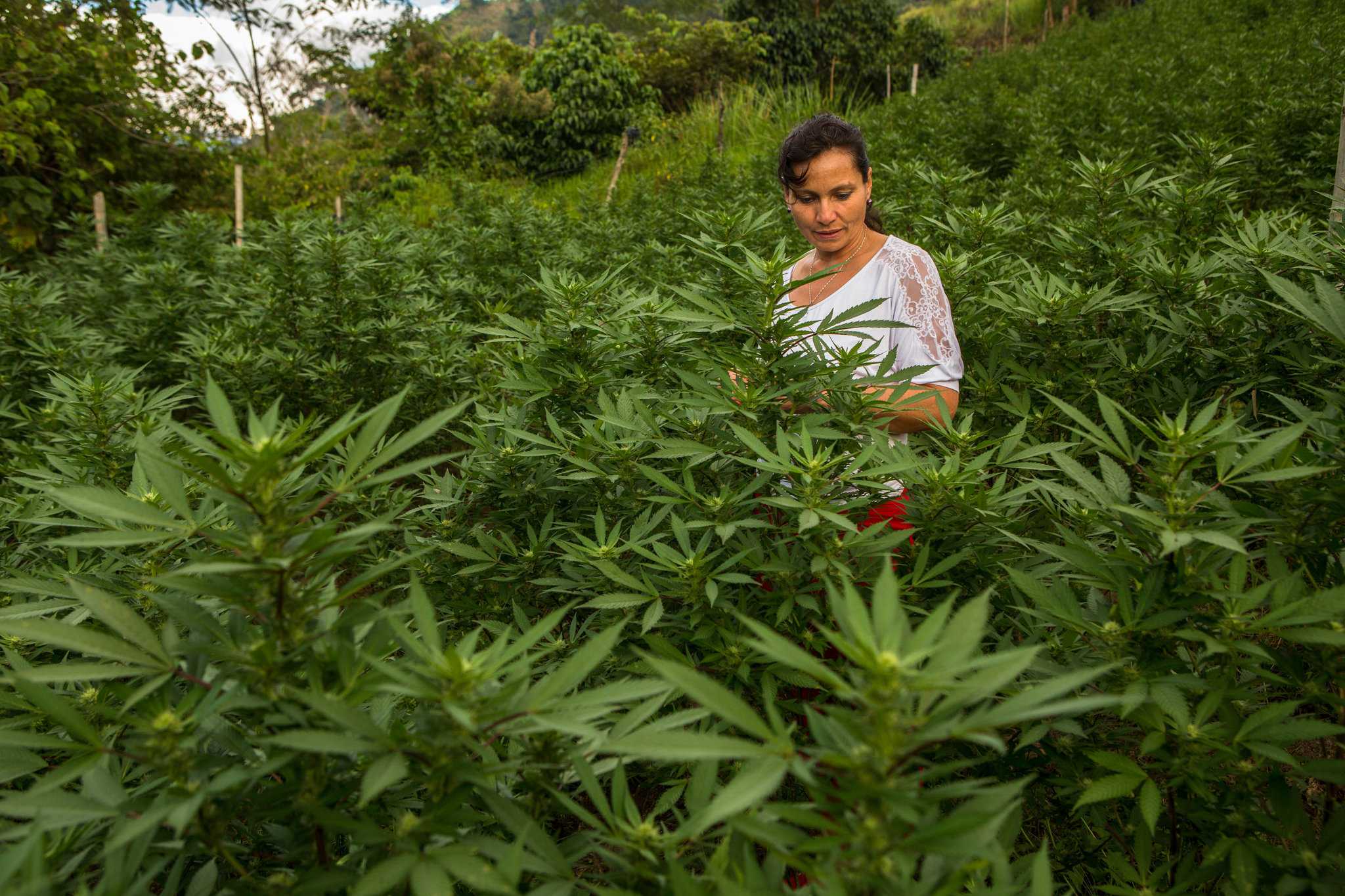 CORINTO, Colombia — For years, Blanca Riveros has had the same routine: After fixing breakfast and taking her son to school, she heads home to a large plastic trash bag filled with marijuana.

She trims the plants and gets them ready for Colombian drug traffickers. After school, her son helps cut more.

The business was long overseen by the country’s largest rebel group, which dominated this region, taxed its drugs and became internationally notorious for trafficking in billions of dollars in illicit substances. But when the government signed a peace deal with the fighters last year, the state swept in and reclaimed this remote mountain village, threatening to end the trade.

“How am I supposed to feed my family?” Ms. Riveros asked.

She now has an unlikely option: growing marijuana with the government’s blessing instead.

CORINTO, Colombia — For years, Blanca Riveros has had the same routine: After fixing breakfast and taking her son to school, she heads home to a large plastic trash bag filled with marijuana.

She trims the plants and gets them ready for Colombian drug traffickers. After school, her son helps cut more.

The business was long overseen by the country’s largest rebel group, which dominated this region, taxed its drugs and became internationally notorious for trafficking in billions of dollars in illicit substances. But when the government signed a peace deal with the fighters last year, the state swept in and reclaimed this remote mountain village, threatening to end the trade.

“How am I supposed to feed my family?” Ms. Riveros asked.

She now has an unlikely option: growing marijuana with the government’s blessing instead.

A Canadian company called PharmaCielo, with the government’s approval, is working to produce the drug legally in Colombia and is looking to hire.

It is an unorthodox experiment by Colombia, one that underscores the region’s changing attitudes towarddrugs after decades of fighting them.

Colombia has received billions of dollars in American aid to eradicate the drug trade. But in the coming weeks, the government says, it will begin processing licenses for a small number of companies, including PharmaCielo, under a 2015 law that allows the cultivation of medical marijuana.

In places like Mexico and Afghanistan, crop substitution programs have typically involved coaxing farmers to switch from illicit crops to mainstream agriculture. Poppies are replaced with wheat; coca leaf with coffee.

Rarely has a country taken an illegal drug overseen by a criminal organization and tried to replace it with the same crop produced legally, sold by corporations.

“Here we have an entirely new opportunity,” said Alejandro Gaviria, Colombia’s health minister, whose agency is issuing the licenses.

Mr. Gaviria said that decades of efforts by Colombia to move drug cultivators to other crops had hit a wall: The peasants made less money, rural development moved backward, and some farmers simply returned to drug cultivation.

“It’s been a complete failure,” he said.

More than 220,000 people were killed as the rebels of the Revolutionary Armed Forces of Colombia, or the FARC, waged 52 years of war against paramilitary groups and the government, displacing the state entirely in some places. In the final decades, guerrillas moved into narcotics, financing the conflict through taxes on marijuana and cocaine, government officials and experts say.

The logic now: What if those profits were put into the hands of the government and peasants instead?

There is also a third actor that will profit greatly from the newly legal business, Canada’s PharmaCielo. Others, including a Colombian company, are seeking licenses, but PharmaCielo is the most prominent in pursuing cultivation in areas once controlled by the rebels.

Formed in 2014 as the new law was taking shape, PharmaCielo is already testing strains of cannabis more potent than those the rebels ever controlled. Its directors include former executives of Philip Morris and Bayer. The company sees a future in which the legal drug industry is controlled by the same kind of multinational corporations that the Marxist-Leninist guerrilla movement aimed to drive from the country.

Here in Corinto, the company has already signed a deal with a workers’ cooperative to provide labor, with plans to eventually move in with its own greenhouses, plants and fertilizer.

“The peasants were forced to produce these plants,” says Federico Cock-Correa, who heads the Colombian subsidiary of PharmaCielo and promises to pay his growers far more than what they earned during the war.

The company’s Colombian headquarters are on rolling farmlands outside Medellín, best known for the kingpin who ruled them for decades, Pablo Escobar.

Mr. Cock-Correa, however, is new to the drug business, coming to cannabis after a long career exporting cut chrysanthemums, which he says grow in a similar way as marijuana, to the United States.

Mr. Cock-Correa swung open a padlocked door to his facility and showed off a kind of industrial future for Colombian drugs. Vast greenhouses. Organic fertilizers. A test area of 19 marijuana plants, barely four months old, some of which had grown taller than him.

For PharmaCielo, the first challenge was lobbying to change the laws in Colombia, the recipient of $10 billion in American aid over the past two decades to fight the drug trade. The Colombian government will continue its eradication efforts for crops like coca leaf, which is used to make cocaine, and for marijuana grown in violation of the new law.

But Mr. Cock-Correa, who counts the former president, Álvaro Uribe, among his neighbors, said government officials were fascinated by the idea of using legal, medical cannabis as a tool for development once the rebels were out of the picture. The 2015 law allows medical marijuana cultivation for the domestic market and the export of medical marijuana products like oils and creams.

In another part of the country, the Central Andes mark the rugged homeland of Colombia’s indigenous Nasa people. For years, the Nasa were terrorized by the rebels, who not only taxed the marijuana trade, but also extorted from legal businesses in towns like Toribío.

Mauricio Caso, Toribío’s deputy mayor, recalled a Saturday morning in 2011 when the rebels planted a car bomb in a bus that passed a crowded market. Five people were killed and dozens of buildings were damaged. The engine of the bus landed in the church.

“We will never forgive what they did in Toribío,” Mr. Caso said.

He was speaking to Mr. Cock-Correa, who had traveled to the town to make his medical marijuana pitch, promising jobs and development. But while Mr. Caso was pleased to have the rebels gone, he seemed skeptical of Mr. Cock-Correa, too.

“What’s important here is we don’t go 500 years backward to the times where indigenous people were working for outsiders and marginalized,” Mr. Caso said.

“We felt the conflict, too, with our own flesh,” said Mr. Cock-Correa, changing the subject to more recent history.

“We Nasa walk slowly but safely,” Mr. Caso replied. “You men from Medellín tend to be crafty and fast.”

Not all local leaders were as cool to PharmaCielo. Edward García, the mayor of Corinto, estimates that two-thirds of his town of 32,000 people depend on cannabis for a living.

“That people can even pay their taxes is because they are growing marijuana,” he said.

The prospect of moving to any other crop gives growers in this area chills. Who would buy tomatoes when there are plenty on the market already?

Elmer Orozco tried planting them about eight years ago and discovered that, unlike with marijuana, which goes to international markets, the only market he had access to for his tomatoes was the one downtown. Buyers offered him about 13 cents per kilogram of his tomatoes.

Mr. Orozco went back to marijuana and its high prices.

But Ms. Riveros, the mother who trims marijuana plants, says the profits of the illegal trade have fallen since the FARC stood down, by more than half. Experts say the peacetime market has been flooded with cannabis that can move out of rebel territory more easily now that the rebels do not control it.

Her hopes now rest with PharmaCielo. “It would be a miracle for us,” she said.

But for now she still cuts cannabis for the mafia groups that come by Corinto.

She pulled out a half-filled sack and started trimming, using scissors with an index finger that had grown crooked after years of the same work. Her son, 8, sat next to her, watching Colombian show horses on YouTube, using a wireless router they had bought with the marijuana money.

At one point, prospective clients pulled up in a car to her small adobe home. Ms. Riveros pulled out a plastic bag with trimmed cannabis.

“It will be much more technical with the company,” she said, referring to PharmaCielo.

It was getting to be evening. Ms. Riveros strolled through a field of her own plants, then wandered over to an oven in a shed where long cannabis branches were hanging to dry from the ceiling.

As the sun set, the growers in the village were beginning to turn on the lights above their plants, plot by plot. Before long, the entire hillside seemed lit up. The other mountains were, too. The lights of the high-rises of Cali shimmered in the far distance.