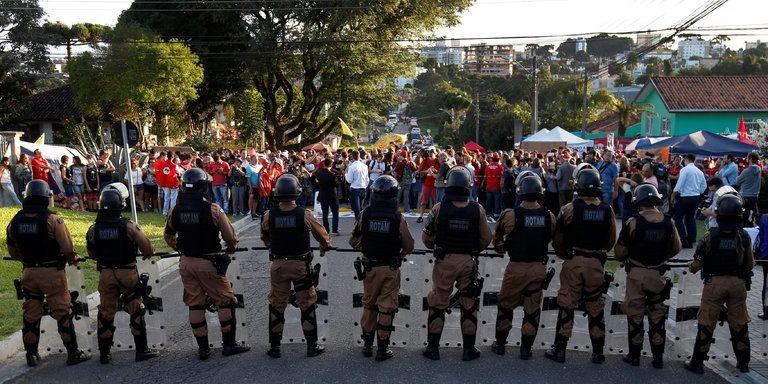 CURITIBA, Brazil — On his first morning as a prisoner, Luiz Inácio Lula da Silva had a breakfast of bread, butter and coffee.

Later on Sunday, he watched a final soccer championship match between Corinthians, which he roots for, and its archrival, Palmeiras. His team won on penalties.

Mr. da Silva, 72, is no ordinary prisoner: Outside the building where he is confined is a plaque with his name on it, commemorating the opening of the building in 2007, during his presidency of Brazil.

The country, the largest and most populous nation in Latin America, has begun to absorb the reality of the downfall of Mr. da Silva, who surrendered to the police on Saturday night, two days after the country’s top court ruled that his 12-year prison sentence for corruption and money laundering could begin, even as he continues to appeal.

The jailing of Mr. da Silva, known universally as Lula, most likely ends his effort to return to the presidency, which he held from 2003 to 2011.

Mr. da Silva’s accommodations are slightly more generous than those of ordinary inmates. His cell is about 161 square feet — compared with the usual 97 square feet — and he doesn’t share it with other inmates.

The cell, which was previously used to host police officers visiting Curitiba on temporary assignments, is near offices in an area separate from the holding cells where regular prisoners are held.

He is the only prisoner on the fourth floor of the Federal Police building here; the others are on the first floor.

“It’s a clean space, with a bed, a dresser and a bathroom,” Cristiano Zanin, Mr. da Silva’s lawyer, said in an interview on Monday. “The room itself is not a problem. As far as the place, it’s, let’s say, modest.”

Mr. Zanin said the soccer game just happened to be playing. “He didn’t make any request, didn’t ask to be allowed to watch the game,” the lawyer said. “The television set was already there.”

Mr. da Silva packed a handful of books to read while in custody, including “A Elite do Atraso,” or “The Backward Elite,” a book by the Brazilian sociologist Jessé de Souza. The author argues that Brazil’s huge corruption investigation, which is known as Lava Jato, or Car Wash, is a critical part of a plot to maintain wealth and power in the hands of the elite.

Mr. Zanin said there were several details yet to be worked out regarding how much contact Mr. da Silva, an energetic and gregarious leftist politician, would be allowed to have outside his legal team.

Prisoners in the Curitiba police building ordinarily get two hours a day outside their cells. They can see their lawyers anytime, and relatives once per week. The cell’s windows, which do not have bars, open onto an interior corridor.

While Mr. da Silva’s cell boasts no luxuries, it is a far cry from the conditions ordinary prisoners endure in Brazil’s notoriously crowded, violent and underfunded prison system.

Last year, 722,000 inmates were detained, crammed into a network of buildings designed to house one-third that number, said Juliana Melo, a professor at the Federal University of Rio Grande do Norte who studies the country’s penal system.

“It’s a myth that this is the country of impunity,” she said. “It’s the country of selectivity.” She noted that the vast majority of prisoners in Brazil are black or mixed-race men charged with drug crimes. More than 40 percent have yet to be tried.

Other defendants convicted in the Car Wash scandal have also been spared being held with the general prison population. Several — including the former governor of Rio de Janeiro, Sérgio Cabral, and the former speaker of the lower house of Congress, Eduardo Cunha — are imprisoned at a medical correctional institution outside of Curitiba.

As Mr. da Silva has begun settling into a new routine, hundreds of his supporters have set up a camp outside the police building.

“Lula has become a political prisoner, victim of relentless persecution by adversaries who resorted to the judiciary to silence him, destroy him, in an effort to discredit his role before history and the Brazilian people,” the former President Dilma Rousseff, Mr. da Silva’s handpicked successor, said in a statement Monday.

The leader of Mr. da Silva’s Workers’ Party, Senator Gleisi Hoffmann, has reiterated over the past couple of days that Mr. da Silva is still the party’s candidate for the presidential election that will be held in October. But even if Mr. da Silva were free to campaign, under Brazilian law, his conviction makes him ineligible to run.

“Our vigil will not end,” Ms. Hoffmann said during a rally on Sunday in Curitiba. “While Lula is in jail, we’ll stay here.”

On Sunday, as some 500 supporters gathered, there were sandwiches for sale, a row of portable toilets and an information center staffed by party loyalists. They offered free water and snacks for passers-by.

“We’re socialists,” a woman explained, as she handed a reporter a cup of water.

A version of this article appears in print on April 10, 2018, on Page A4 of the New York edition with the headline: For ‘Lula,’ the Downfall of a Brazilian President Leads to a Prison He Opened. Order Reprints| Today's Paper|Subscribe