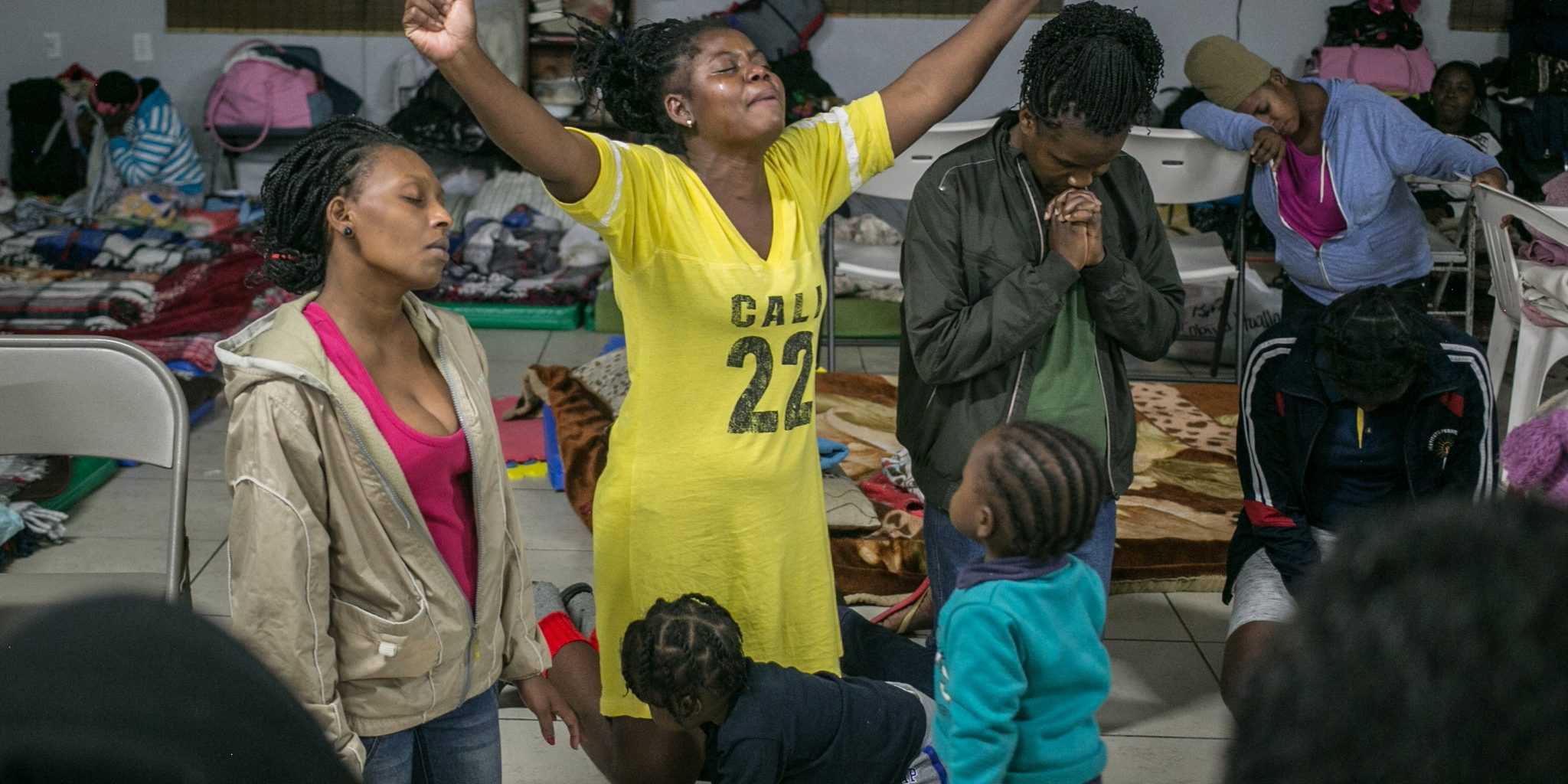 TIJUANA, Mexico — Even before President Trump decided to build the wall, this Mexican border city was already overwhelmed.

So many Haitian migrants, traveling across the Americas, began arriving here last year with hopes of crossing into the United States that churches, community halls, after-school programs, rehabilitation centers and private citizens have opened their doors to house, feed and clothe them.

In one shelter, about 250 migrants — men, women and children — share two toilets and one shower. Four hundred are crammed into a church. A soup kitchen sleeps hundreds in hallways, a pantry and a lot out back.

Now, some officials and advocates worry that Mr. Trump’s plan could spur immigration crises in towns and cities all along the border and, indeed, throughout Mexico.

TIJUANA, Mexico — Even before President Trump decided to build the wall, this Mexican border city was already overwhelmed.

So many Haitian migrants, traveling across the Americas, began arriving here last year with hopes of crossing into the United States that churches, community halls, after-school programs, rehabilitation centers and private citizens have opened their doors to house, feed and clothe them.

In one shelter, about 250 migrants — men, women and children — share two toilets and one shower. Four hundred are crammed into a church. A soup kitchen sleeps hundreds in hallways, a pantry and a lot out back.

Now, some officials and advocates worry that Mr. Trump’s plan could spur immigration crises in towns and cities all along the border and, indeed, throughout Mexico.

The Mexican government, they say, may not be able to handle it.

Mr. Trump is seeking to tighten the border, restrict immigration and increase deportations from the United States. In announcing his actions this week, the president said they would “help Mexico by deterring illegal immigration.”

“Going to be very, very good for Mexico,” he declared.

Yet some international officials and advocates envision a potential nightmare for the country.

A growing number of people have been streaming north from Central America, fleeing violence and poverty in their homelands. Nearly 409,000 were caught trying to cross the southwestern border of the United States illegally in the 2016 fiscal year, a 23 percent increase over the previous fiscal year, according to American government statistics. And the trend has continued over the past few months.

As more migrants are blocked at the American border and more undocumented immigrants are deported from the United States, border communities in Mexico could be overwhelmed, migrant shelters could overflow, the ranks of the unemployed could swell, and Mexico will bear the strain, officials and advocates say.

“It’s worrying us,” said Christopher Gascon, chief of the Mexico office for the International Organization for Migration. “How Mexico can handle that is going to be a whole new area of concern. I don’t think the absorptive capacity is there.”

Even before this week, Mexico was facing extraordinary migration pressures. The waves of Central Americans heading north were severely testing Mexico’s border patrol in the south of the country and led to a sharp increase in the number of people applying for asylum in Mexico, with applications more than doubling from 2015 to 2016.

Mexican officials were also scrambling to develop a strategy in case Mr. Trump made good on his promises to increase deportations of undocumented immigrants, a population that includes millions of Mexicans. An intergovernmental group began on Monday to study ways to help integrate deportees into Mexican society.

Under American pressure, President Enrique Peña Nieto of Mexico had been trying to stanch the flow of migrants heading through his country, starting the Southern Border Program in 2014 in an attempt to control the movement of people and goods crossing the border with Guatemala. The plan contributed to a doubling of deportations between 2013, before it was enacted, and 2016. Nearly all the deportees in recent years have been from Central America.

But the country’s borders remain highly porous. The International Organization for Migration estimates that between 400,000 and 500,000 undocumented migrants transit through the country every year, about 90 percent of them Central Americans.

Here in the state of Baja California, the migrant crisis has highlighted the Mexican government’s limited capacity to deal with the challenges.

Haitian migrants, traveling from Brazil, began arriving in this border city last spring. For a while, the Haitians had little trouble crossing into the United States. In recognition of the troubles in Haiti following the 2010 earthquake there, American border officials allowed undocumented Haitians to enter under a humanitarian parole provision, with permission to stay for as long as three years.

The migrants filled the handful of longstanding migrant shelters and cheap hotels in Tijuana while they waited, often for weeks, for their appointments with American border officials.

Then in late September, the Obama administration suddenly announced that it was fully resuming the deportations of Haitians, hoping the policy change would dissuade more Haitians from migrating. Still, the Haitians kept coming.

As the Haitian migrant population has ballooned — there are now about 4,500 Haitians in Tijuana and elsewhere in northern Baja California — the Mexican authorities have resisted pleas to open a government-run emergency shelter.

More than 30 shelters are providing for the Haitians, yet none are government-run. Most of the burden of sheltering, feeding, clothing and caring for the nonstop stream of Haitians has fallen to civil society groups and individuals, who have accused the government of doing too little too late.

This month, a coalition of the main shelters in Tijuana and Mexicali sent a letter to Mr. Peña Nieto demanding a more robust federal “intervention” to address the crisis. The shelters have yet to receive a reply, they said.

Advocacy and humanitarian groups in Tijuana filed a complaint this week with the National Human Rights Commission alleging that federal officials had violated the migrants’ human rights “in a widespread and repeated manner” by failing to address the crisis.

Federal officials have rejected the criticism that they have been neglectful.

“Is there room to do more? Yes,” Rodulfo Figueroa Pacheco, chief of the Baja California office of the federal migration agency, said in an interview last week, before the complaint was filed. “It’s been a struggle.”

“But,” he added, “it isn’t true that the governments have been unresponsive.”

The crisis, now in its ninth month, has been a crushing burden on the shelters.

The migrant population at one longstanding shelter, Movimiento Juventud 2000, with capacity for about 25 people, soared to about 250, many of them living in donated tents in an adjoining lot that becomes a swale of mud when it rains.

Iglesia Cristiana Embajadores de Jesus, a church situated in a denuded ravine on the western edge of Tijuana, was sheltering hundreds of people even though it was not connected to the municipal water supply and had to refill its tanks with a water truck.

Administrators at Desayunador Salesiano Padre Chava, which had for years served as a soup kitchen, repurposed nearly the entire building, including corridors and the pantry, into a sprawling dormitory that at one point housed more than 500 people.

Claudia Portela, coordinator of Padre Chava, which recently opened a smaller second shelter, estimates that donations have provided for 98 percent of their needs during the crisis.

Government officials, while acknowledging that the bulk of the humanitarian assistance has come from civil society, insist that they have provided crucial services but have been sorely limited by budgets that were already under strain amid Mexico’s economic malaise.

“Our deployment has been very, very small,” Mr. Figueroa said. “Institutional capacities are not as robust as we’d like.” But despite the limitations, he said, government agencies had donated more than $280,000, about 445,000 meals, thousands of blankets, hundreds of mattresses and many other goods and services since late October.

State and federal officials, he said, were still discussing the possibility of opening a shelter, but the proposal raised difficult practical and philosophical questions.

“Will we be building something we can’t unbuild?” he said.

Ad hoc networks of humanitarian groups have scrambled to help.

“For me, the worst part is the omission of the federal government,” said Soraya Vazquez, one of nine women who run the Comité Estratégico de Ayuda Humanitaria Tijuana, a local group formed in September. “The government has to recognize it as a humanitarian crisis.”

On a recent morning, she and her colleague, Adriana Reyna, jumped into Ms. Reyna’s sport utility vehicle and took a tour of several shelters in Tijuana to assess their needs.

At Iglesia Cristiana Embajadores de Jesus, the church in the ravine, a 1½-year-old Haitian girl had fallen. Her parents worried she had fractured a bone. So the women drove the child and her father to a nearby clinic where they arranged for a free evaluation, then swung by a pharmacy to pick up some medicine to treat the pain and swelling.

At another shelter, the women lined up doctor’s appointments for a man with an infected leg wound and for two migrants who were experiencing complications with their pregnancies. They also strategized about setting up a piñata workshop that would give migrants employment.

A message arrived, saying that an art-house cinema had about 30 pillows to donate. With a phone call, the women found a taker: a shelter in central Tijuana.

At Iglesia Central del Nazareno, which had been converted into a shelter, the coordinator asked the women whether they had heard anything new about how Haitian migrants were being received at the United States border. Were they being deported?

It was the day after Mr. Trump’s inauguration, and rumors were flying.

“I hope they’ll all be able to cross. I hope they’ll be O.K.,” said the coordinator, Ruth Gaxiola, fighting back tears. She looked exhausted. Ms. Vazquez opened her arms, and the women embraced.