As Chinua Achebe joins the immortals 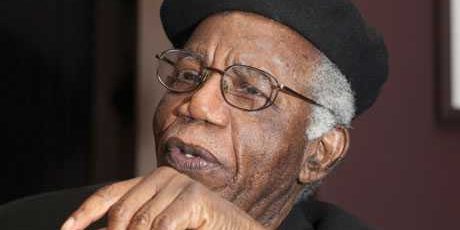 “Chinua Achebe was well known throughout the 55 countries of Africa and even beyond. His fame rested on solid personal achievements.

he had brought honour to the continent by telling the authentic story of Africa in the work Things Fall Apart. His work changed the narrative of years of denigration of the African as if he had no culture, nor language nor history.

“The drums beat and the flutes sang and the people held their breath as African countries struggled for independence. The Western narrative of Africa was strong and deep seated, but Chinua Achebe was determined and equipped with knowledge, passion, and the craft and wisdom of ancient storytellers. Every line, every proverb and every sentence of that book stood out. In the end, Achebe defeated the Tarzan narrative and gave Africans a voice.

“That was many years ago, 50 years and more, and during that time Achebe’s fame grew like a bush-fire in the harmattan. He would write several other novels, essays, short stories, poems and works all evincing deep wisdom, knowledge, prescience and impassioned advocacy for the betterment of Africa and the black race.”

This recasting of the opening lines of the most famous book out of Africa and one of the best books in world literature played through my head in contemplation of a truly outstanding life whose passage is being celebrated this week as the University of Nigeria held a Special Senate Session to honour Chinua Achebe.

There was a sense of the dramatic and surreal at the occasion. As is the tradition at Senate meetings, University Registrar, Ogbueshi Anthony, Okonta called out names of members of Senate present. They responded. He called several names, certainly with no intention of calling the more than 100 professors present. Then he called Emeritus Professor Chinua Achebe. Silence. He called thrice. Silence.

The grave silence provided an entrée for the Vice Chancellor, Prof. Bartho Okolo who observed that it was unusual for Achebe not to answer to his name. The VC then called him once more as Achebe’s body rested in the casket at the centre of the Main Hall of the Enugu campus. There was no response as the hall fell deeply silent at the further calling of Achebe’s name. “Truly, this is a solemn confirmation that the earthly sojourn of our revered colleague, Emeritus Professor Chinualumogu Albert Achebe, our compatriot who rose to become a citizen of the world, has come to an end. It is, therefore, with profound grief and regret that I preside over this special senate in his honour,” the Vice Chancellor added.

It would be a tad too dramatic to say that things have fallen apart with the passage of Chinua Achebe. The literary community is certainly no longer at ease either with the impeding of our hopes concerning continued longevity for this Iroko who departed this plane on March 23, 2013 in the United States.

Scholars gathered, Tuesday, to pay their last respects to Chinua Achebe with an academic procession and special senate session at the Enugu campus of the University of Nigeria. It was sobering yet uplifting.

Chinua Achebe’s history is already well told across the world. At each event, through this week of his funeral, though, that life story would be told and retold. It is clearly important to share, acknowledge and deeply appreciate his life.

Achebe lived just short of a century but he was, pun very much intended, a man of the people; of his students; of his country and of the world. It is fitting that the world has acknowledged his passage and his monumental contributions in several tributes and eulogies ranging from formal proclamations in his honour from government entities in Nigeria, the United States, South Africa and Jamaica as well as tributes from writers and writers’ organizations worldwide as well as by citizens everywhere.

Chinua Achebe was an academic in the finest traditions of contributing to new knowledge, illuminating hidden or unclear aspects of life and opening the eyes of people to new vistas. He was the epitome of inspiration to all who heard the sound of his voice or read the words he wrote.

At the University of Nigeria, he served as a researcher, as a teacher, and as a fountain of knowledge and inspiration. He gave life to Okike, the journal of new African writing, and served as editor of the journal of socio-political discourse, Nsukkascope. His presence alone was an endorsement and enabler. He was professor emeritus until his passage.

In an earlier tribute, UNN Vice Chancellor Prof. Bartho Okolo asserted that Prof. Achebe was “one of the academic titans whose presence on the faculty served as a beacon of light that drew the world to the University of Nigeria.”

Chinua Achebe was an agada kpa here uzo, to quote Uzor Maxim Uzoatu. He was a pathfinder and trailblazer. Not only did he climb the tall tree of literature, he also held aloft the ladder so that other writers could climb through the African Writers Series and his vocation as writer and teacher.

No one expected Achebe to live forever; as god-like as he seemed, he still was but a man.   When he wrote Things Fall Apart, it was a revelation. It not only was a fantastic read, it opened our eyes to so many issues with and about so many subjects beyond even the obvious.

It was clear that the gathering Tuesday was not really to mourn but to pay the respect of the university community. The university, through the Vice Chancellor, declared that, “He will be remembered as a remarkable teacher, astute administrator, a creative genius, a story teller and author of extra- ordinary ability.” VC Okolo said UNN mourns Achebe for “his unique contributions to the development of our university and for the enormous visibility he brought to our university through his creative works, even in his death.”

It is clear then that no one can be talking about LAST respects, as the debt of Africans to Achebe will never be fully repaid. Homage to Achebe will clearly never be a one-time thing.

Chinua Achebe by his work, life and passage on March 23, 2013, has joined the pantheon of immortals that would forever be remembered wherever the stories of peoples and nations of the world are mentioned.

The gratitude of the University of Nigeria is one that is shared across the world for the life and work of Chinualumogu Achebe. And it is gratitude that several people will express by telling it on the mountain, over the hills, across the seas, that there was a Country. And in that country, there were People, and in the hearts of those people…there was a Man. There IS a man. Achebe is dead. Long live Chinua Achebe.

Nwakanma, an alumnus of the University of Nigeria, is Chief Executive of Blueflower Limited.