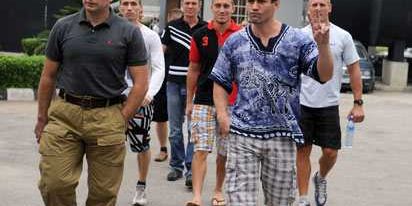 The action followed the withdrawal of the charges by the Federal Government, which said it would continue the prosecution of a Nigerian firm, Blueseas Maritime Services Nig. Ltd, and its employee, Stanley Chinenye.

The Nigerian Navy had on October 18, 2012 arrested MV Myre Seadiver and its Russian crew for allegedly carrying smuggled weapons. The seized cargo was said to be carrying 14 AK-47 rifles and 3,643 rounds of ammunition and 22 Benelli MR1 rifles with 4,955 rounds.

Justice Okechukwu Okeke, who was handling the matter before he retired, had released the Russians on bail guaranteed by their Embassy in Nigeria. The vessel was given a bail bond of $500,000.

No reason for both the withdrawal of the charges and the decision to continue pressing the charges against the two remaining accused, was given by the government counsel, Mrs. Ajara Yusuf.

The Director of Public Prosecutions in the Federal Ministry of Justice, Mrs. Olufemi Fatunde, had on April 30 told the court that some of the Russians were wrongly charged and that the prosecution would amend the charges.

After Justice Tsoho discharged the Russians , Yusuf immediately substituted the former charges dated June 18, 2013 with the another dated October 7, 2013, reflecting only the names of Bluseas company and Chinenye as the accused persons.

Tsoho fixed November 26 for the arraigment of the two accused. Chinenye was in court on Tuesday, but the company was not represented by anyone.

The judge ordered that Blueseas must either be represented by one its directors or the company secretary, or authorisation be given to Chinenye by the firm to represent it.