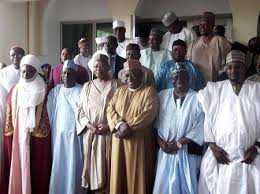 The Arewa Consultative Forum, ACF, yesterday opposed alleged suggestions by a Constitutional Lawyer, Professor Ben Nwabueze that he should be allowed to draft the people’s constitution during the proposed National Conference.

ACF in a statement signed by its National Publicity Secretary, Anthony Sani said it, ”has read with great concern reports credited to Professor Ben Nwabueze to the effect that he wants Mr President to mandate him to draft the people’s constitution for consideration in the proposed conference.

”We do not want to believe the reports, precisely because there is a National Advisory Committee charged with the task and responsibility of collating views for the purpose of advising the government on the mode, nature and content of the proposed conference.

does not qualify him to seek to determine the outcome of the conference up front. More troubling would be the impression created in the minds of Nigerians that the conference is intended to produce a brand new constitution, whereas no sitting government has the constitutional right to discard the existing constitution in favour of a new one.

“We hope Prof. Nwabueze is not attempting to make the conference sovereign irrespective of the advice by the advisory committee.”