APGA disowns Maxi Okwu, says: He is not a member of our party 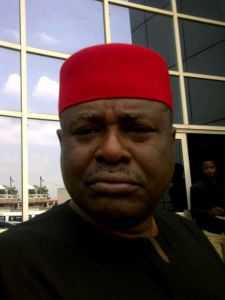 The crisis in the All Progressives Grand Alliance (APGA took a new dimension this morning, with the Victor Umeh leadership

1) Our attention has been drawn to Press releases made in the name of the All Progressives Grand Alliance (APGA), by a certain Chief Maxi Okwu, purportedly claiming Chairmanship, secondary to a recent decision of a Federal High Court Order, sitting at Abuja. Nigeria.

We, at the All Progressives Grand Alliance (APGA), declare as follows:

2) The said Chief Maxi Okwu is not a member of our Party – the All Progressives Grand Alliance (APGA). Period.

3) Let it also be known to all men that the said Chief Maxi Okwu’s name does not exist anywhere, in any register of the All Progressives Grand Alliance (APGA), at the Ward, Local Government or State levels, including Enugu State where he reportedly domiciles.

4) We, at the All Progressives Grand Alliance (APGA), Nigeria regret the opportunistic and public nuisance which our great party has been dragged into recently by the infamous judicial hunting of this Chief Maxi Okwu and his cohorts, relying on a recent 2014 Federal High Court order issued at Abuja.

5) The recent Federal High Court Order is a judicial travesty, which undermines the existing judgment rendered by the superior Federal Appeals Court, Enugu in 2013, which nullified the basis of the recent 2014 Federal High Court, Abuja Judgment, and therefore cannot hold.

6) We, at the All Progressives Grand Alliance (APGA), have since filed a motion to stay the execution of same order, based on the above judicial premise and precedent.

7) We warn the Nigerian Courts, Judges, Lawyers, National Judicial Council (NJC), the Nigeria Police Force (NPF), Economic and Financial Crimes Commission (EFCC), Independent and Corrupt Practices Commission (ICPC), Independent National Electoral Commission (INEC), that our democracy is seriously threatened by Judicial Opportunists and fortune hunters, who use legal lapses in the judiciary, and willing Judicial officials to undermine our emerging political system, and in the interim, hold everyone in the polity to ransom, secondary to the Judicial rulings.

8) Our democracy and its growth cannot rely on “Chance verdicts”, to Judicial Hunters, who have no abiding loyalty to the polity or its politics.

9) For these Judicial Hunters and Ambulance Chasers, this is just another day at the office, as there is no abiding loyalty to anybody, the polity or even the judiciary. For them, these are available Judicial openings, which may attract the enforcement of the law, and cannot be passed up, for their interim potential to disorganize a status quo, possibly cause certain re-approachments to be made for a short term payday, then off to another venture.

10) Recent pronouncements by the Maxi Okwu and his cohorts, give vent to the above understanding, as they hang around any verdict, seeking loopholes and judicial misread, from whence they pounce for a veil of plausible authenticity on their dubious Hunting enterprise.

12) These people represent no one but themselves. They have no authenticated offices or representation anywhere in the Nigeria Federation, except their bribery and offerings to information outlets, whose media give them a national presentation for their brazen affront. THEY EXIST NOWHERE.

13) It really makes the law “an ass”, as any individual, person or persons so willing or ordained, and with some wherewithal may use or interpret Judicial loopholes to their whim, regardless of the implication to the greater public and electorate.

14) In Law and society, Legal/Historical Precedents have value, and are the cornerstone of Law and Order in any democratic and constitutional society.

15) The APGA Electorate is not fooled, one bit.

16) We, at the All Progressives Grand Alliance (APGA), would like all to know that, The Justice Umezulike High Court order upon which the Federal High Court, Abuja in 2014, based their recent judgment has since been vacated by the Federal Appeals Court at Enugu in 2013. The Judgment basis, or precedent therefore, does not exist in fact, and in law. Maxi Okwu’s premise for any grandstanding is null and void.

17) Let it further be known to all men that:

19) Maxi Okwu then, sabotaged the Trust placed on him by the APGA party hierarchy, and the APGA electorate to preserve the mandate of our then fledgling party.

20) Maxi Okwu betrayed the Trust of all, including Our Party Leader, Eze Igbo gburugburu – Late Dim Odumegwu Ojukwu in his onerous adventure. Maxi Okwu then, as now, sought to profit and negotiate for a pot of porridge the original APGA mandate and APGA affairs to profiteers.

21) Maxi did profit from the same venture, to the dismay of then fellow APGA NWC members. Chris Ngige is a living witness to how much Maxi negotiated Peter Obi’s APGA mandate for.

22) The National Working Committee (NWC) of our great Party did get rid of this infestation in 2004.

23) Maxi Okwu’s expulsion from the All Progressives Grand Alliance (APGA) due to his above sabotage, was subsequently upheld by an Abuja High Court, sitting at Abuja in 2005.

24) Maxi Okwu, understanding his nauseating deed, including treason to the APGA Party and its faithful, never appealed the standing judgment from the Abuja High Court, regarding his summary expulsion from the All Progressives Grand Alliance (APGA) for his anti-party activity.

25) Such men who should forever hang their head in shame, are not allowed, and cannot represent our great Party or its ethos.

26) Maxi Okwu has never sought to be re-admitted into the party, till date.

27) And, Maxi Okwu has never been re-admitted to the All Progressives Grand Alliance (APGA), either in a lay or official capacity.

28) The National Working Committee (NWC), National Executive Committee (NEC), or other responsible arms of the All Progressives Grand Alliance (APGA) Nigeria party, do not have any record of his re-admission, or re-instatement anywhere.

29) Maxi Okwu therefore, does not in any way, shape or form hold brief for the All Progressives Grand Alliance (APGA) party, in any capacity.

30) This individual is an interloper who hounds the offices of politicians and political officers seeking any jobs and relevance, willing to do any Political job for the highest bidder.

31) A journeyman who started his political travail in the current dispensation with the Alliance for Democracy (AD), then crossed over for a stint with APGA from where he was expelled for anti-party activities, later joined the Green Party (GP), and then the Citizens Popular Party (CPP), does not have the mettle of consistency required to sustain APGA virtues.

32) No wonder his Traditional ruler at Achi, Enugu State described him as “never achieving anything” because of his political wandering.

33) We warn all that Maxi Okwu’s advent into APGA is to parade APGA’s efforts as unserious regarding Nigeria’s affairs. This presentation by any person or persons, is totally unacceptable to us as members and officials of the All Progressives Grand Alliance (APGA). We at the APGA, will fight to our last breath, against any and such presentation, or representation. A man who has difficulty understanding the ethos of APGA and its larger implications to the disenfranchised Nigerian, has no business in our midst.

34) A man who publicly humiliated the APGA Psyche by labeling our late National Leader – Dim Odumegwu Ojukwu as “extremist,” cannot turn around to represent any mantle on his, or APGA’s behalf.

35) We, at the All Progressives Grand Alliance (APGA), are totally embarrassed at the continued loitering around APGA, by this individual and his ilk, seeking a quick payday.

36) They have no lasting legacy except the confusion and nuisance they leave behind after their maraudings.

37) The APGA does not entertain any such men of easy virtue.

38) At the APGA, we are firm in our commitment, and true to our beliefs.

39) Our research indicate that, at the last check, Maxi Okwu was the National Chairman, sole proprietor, member and customer of the Citizens Popular Party (CPP). As at this day and time, Maxi Okwu continues to operate this lone political venture, with which he hoodwinks the Independent National Electoral Commission (INEC) and others, to do any convenient political work. There is no record of Maxi Okwu having resigned from the Citizens Popular Party (CPP), from where he plots and schemes mayhem on other political parties, particularly, the All Progressives Grand Alliance (APGA).

41) Maxi himself understands that any recent judicial action which he parades himself on, is null and void, as a court of superior jurisdiction (The Federal Court of Appeals) has already ruled against his premise for maintaining any relevance.

42) We, at the APGA will kindly inform all our members to resist and desist from any interaction with this individual or individuals, who falsely parade themselves as National officers, especially Maxi Okwu and his ilk.

43) Their pronouncements do not have any recognition in fact, neither the backing of the law, or due process. Their actions in totality are chancy, null, and only serve to confuse and deceive the general public, especially the APGA faithful, while creating undue relevance for their impost. Which in totality is FALSE.

The ALL PROGRESSIVES GRAND ALLIANCE HAS BEEN POSITIONED FOR THE NIGERIAN POLITICAL LONG HAUL, today, tomorrow and forever. We will constitutionally and legally, fiercely guard, any attempt to bring our good name and stance into disrepute. ALL are warned to resist and desist this impostor.