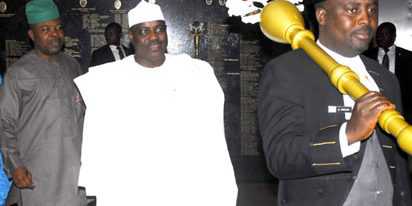 There are strong indications that the All Progressives Congress, APC, may, on resumption from recess of the House of Representatives on January 13, 2014, assume the leadership of the House from the Peoples Democratic Party, PDP.
This, however, may not affect the offices of the speaker and deputy speaker respectively.

The impending development which Vanguard scooped yesterday, is followed by the defection of 37 members of the PDP to APC late last month.
Speculations had been rife since December 2013, shortly before the House went on Christmas break, that the change would have occurred.

A member of the House and PDP decampee who spoke to Vanguard on conditions of anonymity, said the first quarter of the new year would herald changes that would affect the leadership structure of the House.

He said: “Within the House, 2014 will be a remarkable year for Nigeria, remarkable in the sense that, of course, the trend which began in late 2013 in terms of power shift will continue and what that means is that APC should be able to get the requisite 181 members which gives it complete majority. When that happens chances are that the leadership will shift from PDP to APC.

“APC has between 172 to 174 members in the House. And what we just need, I think is between 8 and 9 new members in terms of those crossing from PDP to APC. And that will be the APC requisite that will shape the House and points the future direction of the House.

“But what is certain is that if everything does not change, the leadership, the majority leader will need to relinquish that position because at the end of the day, a party cannot be in the minority and still hold the position of the Majority Leader.”