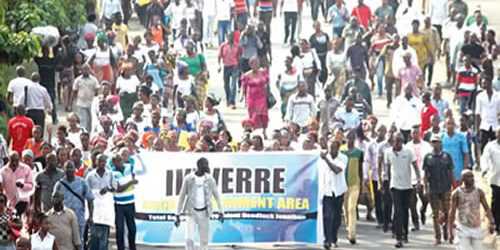 Hundreds of protesters from the four-Ikwerre speaking council areas of Rivers State, on Tuesday, took over the busy Port Harcourt-Aba Road in Port Harcourt, expressing solidarity for the state Commissioner of Police, Mbu Joseph Mbu.
ADVERTISEMENT

They disrupted traffic flow on the road and caused panic in surrounding areas.

The protesters, under the aegis of Ikwerre Peoples Assembly (IPA), took over the GRA Junction point of the highway, vowing to shut public and multinational facilities down should the commissioner of police be transferred out of the state.

The protest, which lasted about one hour, had a full police cover.

The protesters described Mbu in glowing terms, adding that his problem with the state government was his refusal to be used against those opposed to the governor.

The spokesman of the group, Chima Boms, who was also the counsel to the Truth and Reconciliation Commission headed by the late Justice Kayode Eso (JSC), also said Mbu had performed creditably well in the state.

According to Boms, “CP Mbu, in our estimation, has performed creditably well and deserves commendation. We, therefore, request that he continues to serve in Rivers State for the good of the people. Consequently, the Ikwerre Peoples’ Assembly will resist any attempt to redeploy CP Mbu as commissioner of police in Rivers State as such move will take us back to the dark era.”

Meanwhile, the senator representing Rivers South-East Senatorial District in the National Assembly, Magnus Abe, who was shot with a rubber bullet by the police at a Save Rivers Movement (SRM) rally in Port Harcourt over a week ago, has finally broken his silence.

In a statement released on Tuesday, Senator Abe expressed gratitude to friends, well-meaning individuals, groups and indeed, Nigerians, for their prayers, phone calls, solidarity messages and support, and prayed God to protect them at these dangerous times.

He condemned Sunday’s attack on supporters of Governor Rotimi Amaechi at Bori.

In a related development, pposition All Progressives Congress (APC), on Tuesday, alleged that supporters of President Goodluck Jonathan are importing ex-militants from Bayelsa and Akwa-Ibom States to cause mayhem in Rivers State.

A statement by its spokesperson, Lai Mohammed, warned that supporters of Governor Rotimi Amaechi might resort to self-help since Police are allegedly backing the other faction.

Warning of impending bloodbath, the party said, ”Having lost confidence in the ability of the police to protect them and keenly aware of the President’s deliberate refusal to allow peace to reign in their state, the patience of the people of Rivers is wearing thin, and there is an increasing possibility that they may resort to self help, which can only result in a blood-bath.”