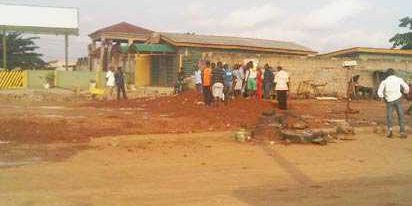 THERE have been several cases of oil spillages across Lagos State with attendant loss of property and lives some times.

The recent case was the incident at Arepo, in Ogun-Lagos border where oil pipeline of the Nigerian National Petroleum Corporation, NNPC, was damaged by vandals, with several lives lost in the process.

According to Nigeria Extractive Industries Transparency Initiative NEITI, crude oil theft and sabotage are some of the many challenges facing Nigeria’s oil sector. This was highlighted in the recent NEITI audit report (2009-2011). According to NEITI estimates, federation and oil companies lost a total of N1.737trillion ($10,992,776,474) during the three years under review.

However, last week, residents of Aminatu Ilo Street, Ejigbo, Lagos, where oil spillage occurred had abandoned their apartments for fear of being arrested by security agents.

When Vanguard visited the street at the weekend, it was deserted as men of the Nigeria Security and Civil Defense Corps, NSCDC, cordoned off the building where the oil was found.

Earlier, Adedeji Ogunba, the landlord of the building where the spillage was discovered in a well, his wife, a pregnant woman and other occupants were arrested by officials of NSCDC.

They were detained on the suspicion that the landlord might have dug his borehole to the level of NNPC’s pipelines which run through a section of Ejigbo community.

Similar cases of oil spillages: The recent oil spill is not the first in the area, as Baruwa Community in Alimosho Local Government Area also experienced a similar occurrence in May 2012.

Also, on July 22, and 25, 2013, consecutively, what could have been another fire explosion in Lagos, as one of the oil pipelines, with Premium Motor spirit PMS, belonging to NNPC, located at Isheri-Olofin area of Egbe- Idimu, Local Council Development Area LCDA, suddenly burst and spread fast to adjourning areas.

According to an eyewitness, the pipeline ruptured at about 1pm around Iyana-Odo Bus Stop, along LASU-Isheri Road, when traders in the area suddenly noticed a liquid substance gushing out of the ground that quickly spread around the entire area.

The traders saved the situation from degenerating into an inferno as they quickly cordoned-off the area to prevent any possible outbreak.

The first day the incident happened, hired labourers were seen re-fixing the burst pipeline and scooping out the spilled PMS into a wide dug pit.

Two days after the first incident, there was panic again in the area as the repaired pipeline leaked again.

However, when Vanguard visited the site of the damaged pipeline, the entire area was deserted. Upon inquiry, Megacityspotlight found that most of the traders had relocated, as residents slept with one eye opened.

Mama Tawa, a petty trader in the area, lamented her fate, she said “We can no longer do our business here anymore due to the burst pipeline. I eke out living from selling pepper and vegetable to passers-by and residents of the estate around here. Since the incident occurred, I have been finding it difficult to meet my financial family obligations. I am a widow.”

One of the residents, who simply identified himself as Peter, wondered how a pipeline could have been allowed to run through a densely populated area like that.

“I think this pipeline should not be in this area. This s not a forest, this is a residential area. The government got it all wrong by allowing this to happen. Why should they approved this (pointing around) as a residential area when they knew there is a pipeline around. Government will be held responsible in the event of loss of lives and property,” he said.

Reacting to the development, spokesperson of Petroleum Product Marketing Company PPMC 2, Mr. Nasiru Imodagbe, attributed the Idimu leakage to the activities of vandals in the area.

He said; “Though, we have repaired the damaged pipeline, its pertinent for the community to take it upon themselves to also protect the pipeline, which is public asset. We have also placed taskforce on ground to police the area and bring any suspect caught to book.

“Oil is our national asset and we must all protect it. Nigerians should take it as a challenge for all. We all owe this country a duty to protect our national asset. It is so unfortunate that the public fund that supposed to be channelled into other meaningful venture is being expended on repairs and provision of taskforce.”

However the arrested residents claimed that they had complained severally over the years to NNPC about the pollution of their underground water and ruptured pipelines without any action been taken. They were, however, taken aback when men of NSCDC invaded their premises and arrested them.

“As a matter of fact, one of the arrested residents claimed that, officials of NNPC promised to come over to their residence the Monday before they were arrested last the weekend, by men of NSCDC.

The commissioner called on CDAs’/CDC’s and leaders in the affected communities to institute legal actions against the Federal Government over the exposure of their communities to danger arising from failure of NNPC to perform its statutory responsibility.

Meanwhile, effort to speak with the boss of NSCDC, Lagos command, was unsuccessful at press time, as our correspondent was asked to check back on Monday, (yesterday) for official comment on the matter.