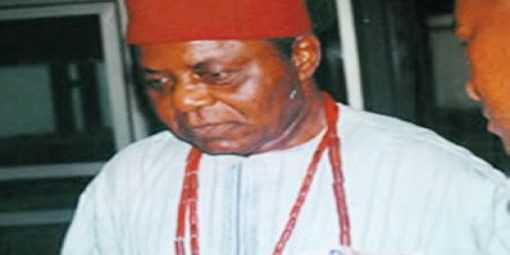 Uwechue, according to a reliable source close to his family, died earlier today, aged 80.

Though his death is yet to be formally announced, tributes are already pouring in for the departed giant. In his tribute, Chief Goddy Uwazurike, President of Aka Ikenga, the Igbo think tank, told News Express: “Ambassador Uwechue was a great man, a diplomat, a leader of people, an author, a publisher and a respected Igbo leader. We will miss his mature advice.”

Born at Ogwashi-Uku, Delta State, in 1935 Uwechue attended St. John’s (Rimi) College, Kaduna from 1949-1954, where he was a foundation student. He was retained as a teacher in the school for a period of eighteen months before proceeding for further studies.

Uwechue obtained a BA (Hons) degree in History from the University College, Ibadan, 1960 and a Diploma in International Law and French Language, 1964, from the Geneva African Institute, Switzerland.

A career diplomat, Ambassador Uwechue joined the Nigerian Foreign Service at its inception in 1960, and served in a number of countries, including Cameroun, Pakistan and Mali. He was Nigeria’s first diplomatic envoy to France, where he opened the Nigerian Embassy in Paris, 1966. Ambassador Uwechue also served with UNESCO in Paris as Consultant on “general History of Africa” project between 1967 and 1970, before he retired to private business in 1970, as Publisher and Editor-in-Chief of magazines and books on Africa, published in both English and French.

He was the Founder and Editor-in-Chief of the renowned KNOW AFRICA books – a three-volume encyclopaedia comprising, Africa Today, Africa Who’s Who and Makers of Modern Africa. For ten years (1980-1990) Ambassador Uwechue lectured on African Affairs at the Royal College of Defence Studies, London, United Kingdom. As Ambassador Extraordinary and plenipotentiary, Uwechue became, in 1999, the Special Presidential Envoy on Conflict Resolution in Africa to the Nigerian President, Olusegun Obasanjo. In this capacity, he s brought his international experience and connections, immense knowledge and passion for Africa, to bear on his assignment.

He played a key role in the peaceful settlement of the decade-long Sierra Leonean civil war, which culminated in free and fair elections in 2002. In addition to his responsibilities as President Obasanjo’s envoy on Conflict Resolution in Africa, Uwechue also headed the ECOWAS Mission in Cote d’Ivoire, charged with coordinating and monitoring peacekeeping operations towards the resolution of the crisis in that country. He was appointed chairman of the Accra III International Monitoring Group, which reported regularly on the situation in Cote d’Ivoire to the ECOWAS Authority, the African Union and the United Nations.

Ambassador Uwechue was married with five children. He held the prestigious Delta State ancient traditional title-the Ogwuluzame of Ogwashi-Uku Kingdom and the Ochudo of Asaba.