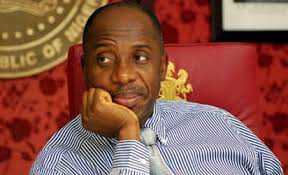 sundry predicaments have shown that it is on the edge of a precipice.

He described the kidnap of Chibok schoolgirls and the Federal Government’s inability to rescue them as a dent on the nation’s image.

The governor spoke yesterday in Port Harcourt, the state capital,  when he opened the 44th/9th biennial conference of Methodist Church Nigeria at Wesley Methodist Church.

This year’s theme of the conference is: Let My People Move Forward.

Amaechi, who was represented by the Commissioner for Culture and Tourism, Dr. Nabbs Imegwu, said there is need for a change in  Nigeria’s political journey to enable the people enjoy a new lease of life.

According to him, the nation’s leaders has shown disregard for the rule of law and reckless disposition to the demands of their offices.

Amaechi said: “This country is on the edge of a precipice. Rivers State happens to be one of the places chosen wittingly or unwittingly for some of these acts that exhibit reduction in righteousness and outright show of man’s impunity to another.

“We have become a global flashpoint for the wrong reason. Countries and nations get reckoning internationally for positive things. Lately, the frequency of mentioning (about Nigeria) in the media, such as the CNN, has never been so prominent. But there has been prominence over the nastiness of all the things you can imagine. It is a national malaise, and we should look at it that way.”