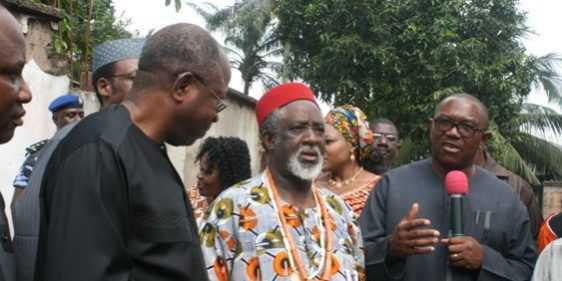 One of the soldiers, allegedly invited by the paramount ruler of the community, Prof Laz Ekwueme, to stop youth from observing the festival killed a masquerade.

It was gathered that the paramount ruler had ordered no masquerade should perform during the festival, which did not go down well with the youth.

The dissenting youth confronted the soldiers mobilised to enforce the order, resulting in a violent clash.

Eyewitnesses said the soldiers shot at the rampaging youth, killing one of them in masquerade cloth.

Several others were reportedly wounded.

Sensing defeat, the protesting youth, it was gathered, retreated and reinforced.

They besieged the mansion of Igwe Ekwueme, setting his vehicles and belongings on fire.

Residents said they also sacked the monarch, whose whereabouts remained unknown as at the time of this report.

The irked youth also burnt the motorcycles, houses and property of other town chiefs and leaders suspected to have sympathies for the monarch.

When contacted, the President General of the community, Cyprian Nwanmuo, confirmed soldiers shot at the youth but denied anybody died.

He also confirmed the monarch was attacked with his house and belonging sets on fire.

Nwanmuo stated that he ran for his dear life, claiming the crisis was a snowball of the faceoff the community had with current Rector of the Federal Polytechnic Oko, Prof. Godwin Onu.

According to him: ‘’Nobody is dead yet. Igwe banned masquerades but that small group against the community in the sponsorship of the ‘man’ went ahead and insisted masquerade must be part of the festival and fought the Army brought to maintain peace and order when police was overwhelmed.

“The soldiers defended themselves. They are burning Igwe’s palace now and his vehicles and Igwe has not been rescued but I have left for Awka now.”

The Oko Youth leader, Evangelist Hilary Ezeokafor and the Assistant National secretary of Oko town union, Sopuluchukwu Ezeonwuka could not be reached.

Efforts to contact the monarch, Igwe Laz Ekwueme , who is younger brother of the former Vice President Alex Ekwueme, also proved abortive, fuelling speculations about his safety and whereabouts.

But a youth in the village, who is also Commander of Arms Federal Polytechnic Oko, Nnolim Sunday, told our correspondent that he was in Ezira with the Rector.

He blamed Ekwueme for the crisis, wondering why he invited soldiers to stop a festival they have performed from immemorial.

Sunday frowned at the positions the Igwe has taken on some issues affecting the community lately.

When contacted, the new Commander 302 Artillery Regiment, Onitsha, Col Jibrin Fagge, confirmed he heard about the incident around 8pm.

He said investigations were on, asking for time to take stocks before making official statement on the issue.

As at the time of going to press, over 20 trucks of soldiers and policemen were sighted moving into position in Oko.

Residents said several community leaders and youth have scampered away to safety.

He said policemen were in full control of the matter to avoid further collateral damages.