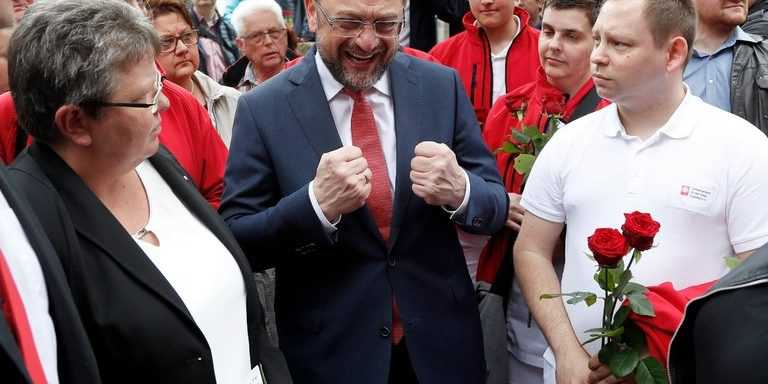 DÜSSELDORF, Germany — Germany’s most populous state votes Sunday in an unexpectedly tight election that is widely seen as a dress rehearsal for the national elections in September, when Chancellor

Mr. Schulz, a native son of this traditionally left-leaning state, rode a wave of hype and hope to sudden popularity early this year but has fizzled badly since. By contrast, Ms. Merkel has played up her status as a world leader and savored two unexpected clear victories for her conservative party in other state elections, last week and in late March.

In recent weeks, Ms. Merkel marshaled Europe into a joint position on negotiating Britain’s exit from the European Union and warned the British against “illusions” that it would come easy.

DÜSSELDORF, Germany — Germany’s most populous state votes Sunday in an unexpectedly tight election that is widely seen as a dress rehearsal for the national elections in September, when Chancellor Angela Merkel will seek a fourth term.

Mr. Schulz, a native son of this traditionally left-leaning state, rode a wave of hype and hope to sudden popularity early this year but has fizzled badly since. By contrast, Ms. Merkel has played up her status as a world leader and savored two unexpected clear victories for her conservative party in other state elections, last week and in late March.

In recent weeks, Ms. Merkel marshaled Europe into a joint position on negotiating Britain’s exit from the European Union and warned the British against “illusions” that it would come easy.

She dined with the Saudi king in Riyadh and the Russian president in Sochi, days after hosting a women’s conference in Berlin with powerful figures as different as America’s “first daughter” Ivanka Trump and Christine Lagarde, the head of the International Monetary Fund.

In a turbulent world, Ms. Merkel’s status as an undramatic but effective problem solver seems to have won over voters at home, despite what her critics say is a lack of a clear domestic agenda.

Last Sunday, her Christian Democrats won elections in Germany’s northernmost state, and one poll conducted afterward for the public broadcaster ARD found that a staggering 87 percent of conservative voters endorsed the view that “Angela Merkel ensures that we are doing fine in an unsettled world.”

Some 46 percent said she was the “most important reason” to vote conservative, while 28 percent said that they would not vote for the party without her.

Publicly, Ms. Merkel almost never acknowledges such numbers. In private, she and her team track poll data, as any successful politician must. After appearing reluctant last winter to run again for office, she has clearly been buoyed by recent events.

Before a dinner crowd of about 550 conservative movers and shakers in this wealthy state capital on Thursday night, Ms. Merkel was almost playful with her interviewer, Michael Bröcker, the editor of the Rheinische Post newspaper.

When he asked, for instance, whether she really is not vain, or if she ever looks herself up online, Ms. Merkel joked, “I only look at my cellphone once in a while so I can remember my own phone number.”

But she was serious when asked about polls that have shown the race tightening in this state, where Ms. Merkel’s conservatives have governed for only five of the past 50 years.

North Rhine-Westphalia “is no easy terrain” for us, she said, while proceeding to pummel the center-left with charges of letting the infrastructure deteriorate, tinkering with education and being lax on security.

Those themes, also important nationally, have dominated debate here, in particular the issue of security. The mass assaults on women in Cologne on New Year’s Eve 2015 and the state authorities’ failure to detain a Tunisian terrorist who plowed a truck into a Berlin Christmas market, killing 12, have prompted fierce criticism of the current coalition government of Social Democrats and Greens.

The Social Democrats have seen their numbers in the state tumble from just under 40 percent to the very low 30s, with all polls now showing a statistical dead heat with Ms. Merkel’s conservatives.

The far-right Alternative for Germany, which held a fractious congress in the state in late April, is predicted to clear the 5 percent barrier for entering the state legislature but to fall short of the double digits it confidently forecast last winter.

The far-right’s support, for now, has been dented by outrage over a far-right party leader’s criticism of the monument in central Berlin to Jews killed in the Holocaust.

It has been similarly undercut by Ms. Merkel’s own moves to reduce the refugee influx and to assuage anti-Islam activists by supporting a ban of the full veil for Muslim women. The distaste for populism as practiced by President Trump in the United States has also reduced its attraction here.

Initially, Mr. Schulz had siphoned support from the far-right. He hails from the far west of North Rhine-Westphalia, which encompasses the gritty Ruhr industrial heartland, several of Germany’s most troubled and most prosperous cities, and bucolic Rhine River country.

To listen to voices from Germany’s Rust Belt is to hear strong echoes of Mr. Trump’s supporters in the United States.

Guido Reil, a 26-year veteran of the Social Democrats and a coal miner, quit the party in disgust last year and joined the Alternative for Germany.

“In the last 10 years, I have been forced to watch the decline of my home, the Ruhr,” he said during campaigning for the state legislature. “We are always speaking so grandly of changing the structure — coal and steel have vanished, and in their place comes something else. But that didn’t happen.”

Susanne Neumann and Christel Wellmann, both 58, are cleaners in the Ruhr area who gained national prominence after Ms. Neumann confronted leading Social Democrats at a forum last year.

They have kept the faith — just — but Ms. Wellmann suggested Mr. Schulz and other politicians “should do our jobs — cleaning, care for the elderly — for just one day. Then perhaps they would act a little more — not just talk.”

Ms. Neumann said, “The gulf between rich and poor is getting bigger and bigger.”

Mr. Schulz has made much of righting inequality, and his program, due only in June, may yet see him surge anew in the long months until the fall elections, which are scheduled to be held on Sept. 24.

But after winning election to lead his party’s campaign with an unheard-of 100 percent of votes cast at a party congress in mid-March, Mr. Schulz and the Social Democrats stumbled in the late March election before losing the governorship in the far north last weekend.

Mr. Schulz, initially welcomed as a fresh face in Germany’s often dull politics, had spent most of his career in European structures in Brussels. So far, he has failed to make a lasting impact, suffering because he does not hold government office, which would guarantee him a certain amount of attention.