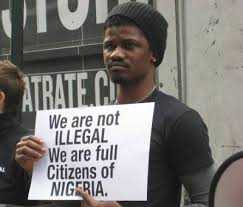 A socio-political group, Anambra Youth, has condemned Lagos State government for dumping 70 indigenes of Anambra State at Onitsha bridge, saying the action amounted to an insult on the people of the state.

It also flayed a member of the House of Representatives, Abiodun Adeleke, for alleging that Aviation Minister, Princess Stella Oduah, awarded contracts for re-modelling of airports across the country without due process.

President of the group, Uche Ifeanyi Okonkwo, said the actions were designed to demonise Anambra State and its people.

According to the group, the attacks show that in spite of efforts by the people of Anambra and other Igbos to regard the people of the South West as their brothers and partners in progress, the dominant party in the region has not stopped stabbing the Igbos in the back.

He said the good relationship that had been thriving between the people of the South East and South West should not be sacrificed on the expediency of party politics and parochial interests of those who struggled to get what they wanted by all means, even if they plunged the country into the crisis nobody knew when it would end.

He said: “Let us take this case of the Minister of Aviation, for instance; I have been travelling by air in Nigeria and outside Nigeria. I know how embarrassed I feel and other Nigerians feel when they arrive the country and witness the dilapidated infrastructure.

“Now, Princess Oduah is changing all these and somebody is talking about due process. Why is it that all the due process secured to rehabilitate these airport facilities in the past never materialised to any physical change of these airports?

“Why is he talking about due process now that Nigerians have seen the good work the Minister is doing and are applauding her for her vision and determination to transform the nation’s airports, in spite of enormous opposition from people like Adeleke.

“If we want this country to progress, we should subsume our parochial interests to the overall interest of our country.”

Okonkwo also emphasised that Adeleke in his vituperations did not directly accuse the Minister of diverting any money or showed evidence of monies not being accounted for, “but he just wanted to rubbish the good job she is doing and to incite Nigerians against her because she is from Anambra State and she does not belong to his party (which is the nucleus of the new party, All Progressive Congress, APC.”

Okonkwo also remarked that there is always a better understanding between the people of South West and South East people and advised that ACN, which is now part of APC, not to kill the good relationship.

“There is much more at stake between us brothers than what our political parties can secure for us at this moment.

“So before they do or say anything, let them consider the implication and the consequence. Let us stop pretending; we need each other for the progress of our country.”

He noted that APC might not make any mark in the South East with the “aggressive and bellicose attitude of Lagos State government and the Adelekes of this world.”