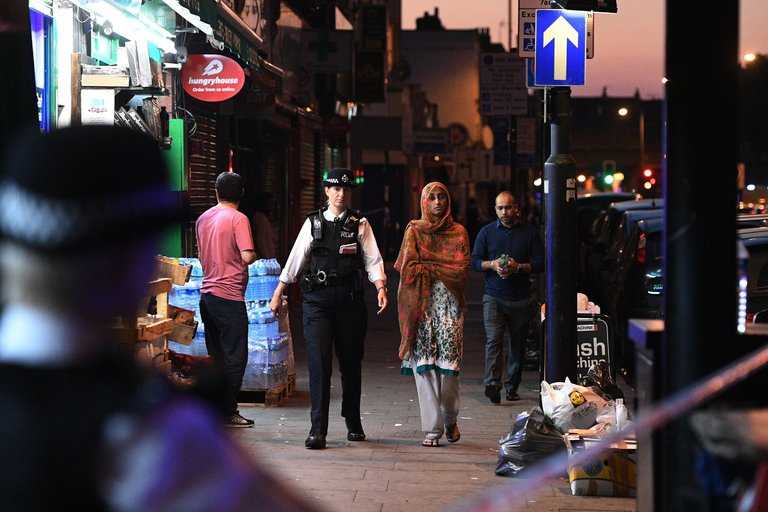 LONDON — Like many of London’s Muslims, Mohammed Abdullah grew tired of defending himself, and his religion, after Islamist terrorists carried out twoattacks in the city and another in Manchester during the past three months.

Hostile glances followed him on the street, and rising fury greeted him on social media.

Then came last week’s devastating fire at Grenfell Tower, a citywide tragedy that killed at least 79 people inside the 24-story tower, including many Muslims. “Good riddance,” one far-right forum commented.

But early Monday, a white British man rammed a rental van into a congregation of Muslims leaving prayers during Ramadan, the holiest month on the Muslim calendar. One person was killed and at least 10 were injured.

“It feels like you’re under siege,” said Mr. Abdullah, 23, a law student standing outside Finsbury Park Mosque in North London on Monday morning hours after the attack. “I wonder,” he said, “is anyone going to write about a ‘white Christian terrorist’ this time round?”

LONDON — Like many of London’s Muslims, Mohammed Abdullah grew tired of defending himself, and his religion, after Islamist terrorists carried out twoattacks in the city and another in Manchester during the past three months. Hostile glances followed him on the street, and rising fury greeted him on social media.

Then came last week’s devastating fire at Grenfell Tower, a citywide tragedy that killed at least 79 people inside the 24-story tower, including many Muslims. “Good riddance,” one far-right forum commented.

But early Monday, a white British man rammed a rental van into a congregation of Muslims leaving prayers during Ramadan, the holiest month on the Muslim calendar. One person was killed and at least 10 were injured.

“It feels like you’re under siege,” said Mr. Abdullah, 23, a law student standing outside Finsbury Park Mosque in North London on Monday morning hours after the attack. “I wonder,” he said, “is anyone going to write about a ‘white Christian terrorist’ this time round?”

London may be the most diverse and tolerant city in the world and is home to more than one million Muslims from dozens of countries. The city’s mayor, Sadiq Khan, is Muslim, and he enjoys broad support outside the Muslim community, too. When Britain voted to leave the European Union, London voted to stay.

But this proudly cosmopolitan city is now confronted with the tensions and ugliness that have been simmering on the fringes for years and are boiling to the surface.

As Hamdan Omar, another student who grew up in the area, put it, “There are people on both sides who want the clash of civilizations.”

The man under investigation for the mosque attack was identified by the police as Darren Osborne, 47, of Cardiff, Wales. Prime Minister Theresa May, who has been criticized for her response to the Grenfell fire, denounced the assault as an act of “evil” and “hatred” and promised to bolster security at mosques.

The authorities said they were treating the attack as an act of terrorism against Muslims, while many of the city’s Muslim leaders pleaded for calm and warned against a rising tide of anti-Islamic sentiment.

“Over the past weeks and months, Muslims have endured many incidents of Islamophobia, and this is the most violent manifestation to date,” said Harun Khan, the secretary general of the Muslim Council of Britain.

In the week after the June 3 terrorist attack on London Bridge and at Borough Market that killed eight people and was carried out by three men inspired by the Islamic State, the Metropolitan Police reported 120 Islamophobic events, compared with 36 the previous week. Similar increases were recorded after the terrorist attacks in March on Westminster Bridge in London, and in May at the Manchester Arena.

On Monday in Finsbury Park, one of London’s many diverse neighborhoods, residents left flowers and messages of solidarity outside the mosque.

“With love, sympathy and support to our Muslim neighbors, victims of this horrific act of terrorism,” read one handwritten note. “This does not represent Finsbury Park,” read another.

The children of a local school had drawn a colorful, even cheerful, sign: “One Community. Standing Together.”

By late morning, the initial fear and shock over the attack had given way to anger — anger at the government and at the news media for too often amalgamating Islam and Islamists. But by the afternoon, another sentiment made itself heard powerfully here: defiance.

“Things like this will only strengthen London,” said Mr. Abdullah, the law student. His grandfather and father had both been praying at the mosque before the attack and were inside when it happened. “An event like this will be met with resilience.”

Uba Osman, 20, a local business manager, concurred: “There are some people who are trying to divide us,” she said. “But they won’t divide us. Londoners are not like that.”

There was a sense of relief here, carefully expressed, that the man suspected in the attack was not from the city. “Somehow, it would have been even worse if he had been from our city,” said Zahra Mounia, 45, a mother of two who lives in South London but traveled here to see a friend after the attack. “We are so proud of this city and what it stands for.”

But some worried London’s tolerance was fraying on the edges, too. Over the past three months, as Islamist militants struck three times, several residents said they experienced small but unsettling episodes of hostility.

“In London, people feel they must tolerate you, so they won’t say anything but you get the dirty looks, people avoiding eye contact,” said Suzanne Stone, 42, a convert to Islam and a writer of children’s books. “My friend outside of London gets real abuse.”

Her husband, Omar Faruq, said he worried about some of the things in the news media. “They say things on the radio and are not held to account,” he said, recalling one show in which a member of the far-right anti-Muslim English Defense League “was calling on people to form militias.”

Mr. Faruq was also concerned that the government might further stigmatize Muslims by expanding the country’s already powerful antiterrorism legislation. “Now there is a lot of talk about nonviolent extremism,” he said. “What does that mean? If you don’t believe in a certain way, you are extremist? Everything is extremism now.”

He pointed out the way the news media had been quick to identify Finsbury Park Mosque as a former hotbed of radicalization. He wondered if that was appropriate: “It just takes away that little bit of sympathy,” he said.

Details matter. That is something many people here said on Monday. It was Muslims, awake because of Ramadan, who saved a lot of lives in Grenfell Tower by waking up neighbors and alerting the fire department. And it was an imam of the Muslim Welfare House who helped form a protective ring around the van driver on Monday before the police arrested him. “How many people know that?” asked Omar Hussain, a community worker.

Language matters, too. When The Daily Mail initially described the assailant outside the mosque as a “white van driver” rather than a terrorist, Muslims were not alone in their indignation. J. K. Rowling, the author of the “Harry Potter” books, criticized The Mail, an influential right-wing tabloid, for the way it referred to him. “The Mail has misspelled ‘terrorist’ as ‘white van driver,’” she wrote, but later deleted, on Twitter. “Now let’s discuss how he was radicalised.”

One answer, said Jacob Davey of the Institute for Strategic Dialogue who analyzes extremist online narratives, is that Islamist militants and far-right extremists have fed on one another’s hatred to recruit people for their causes.

After the Grenfell fire, the English Defense League posted an image of the tower on Facebook (later removed) with the caption: “They say Ramadan saved Lives. It would be the first time Islam saves lives.”

In another Facebook thread about Monday’s mosque attack, one comment read, “What do you expect?” Another, “Civil war has begun.”

Meanwhile, on Ummah News, a forum that supports the Islamic State, commenters reacted to the Monday attack by calling for Muslims to fight back: “Oh Muslims you need to wake up the war is starting now in your own streets outside your own Masajids. Your elders could be killed, your sisters could be attacked. They hate your Oh Muslims.”

Nazir Afzal, who was once the acting chief prosecutor for London and has lived in the city for 20 years, said it was a powerful message to people “on the cusp of radicalization.”

In Finsbury Park, some linked last year’s vote to leave the European Union to a change in atmosphere in the country that also left its mark on London, its opposition to the British exit notwithstanding.

“Since the ‘Brexit’ vote, things have been crazy,” said Mr. Abdullah, the law student. “The spotlight is on minorities. The signal is, ‘You’re not wanted here.’”

Brendan Cox, whose wife, Jo Cox, a member of Parliament, was shot and killed a week before the referendum by a right-wing extremist, urged the country to fight hateful ideology against Muslims, just as much as it was fighting Islamist militancy.

“When islamist terrorists attack we rightly seek out hate preachers who spur them on,” Mr. Cox wrote on Twitter. “We must do the same to those who peddle Islamophobia.”

Mendy Korer, the rabbi of Islington, one of many local faith leaders who had come to Finsbury to show solidarity, said he was confident the local community would beat hatred. “We have a duty to break that cycle,” he said.

Not everyone was so optimistic.

“I think it could escalate,” said Shiraz Kothia of the London Muslim Community Forum who helps the Metropolitan Police to manage community relations during major episodes like this. “We’ve got the right-wing extremists and we’ve got the Muslim extremists.”

“I’m really worried,” he added. “Today outside a Muslim mosque. Tomorrow outside a church?”