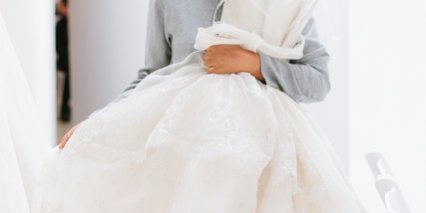 Amsale Aberra, an Ethiopian-born fashion designer whose simple, minimalist aesthetic transformed the modern American wedding dress, died on Sunday in Manhattan. She was 64.

While most wedding dress designers in the 1980s were making elaborate, tulle-and-lace affairs with long trains and decorative appliqués, Ms. Aberra pared everything down. Her dresses had little fluff or flounce and were often strapless with sheer illusion necklines.

Describing Ms. Aberra’s wildly modern styles in 1997, Constance C. R. White wrote in The New York Times, “To be sure, the leg-of-mutton dress, the traditional, high-neck, puff-sleeve number, still has its strong support base, but there is now the option of a sleeker and more sensuous spirit embodied in a narrower shape, bare arms and shoulders and subtle adornment, if adorned at all.”

Starting out in her Manhattan garment district loft, Ms. Aberra went on to create a thriving business under the company name Amsale, opening her first store on Madison Avenue and acquiring and expanding into new lines.

She dressed celebrities like Halle Berry, Julia Roberts, Katy Perry, and Ariana Grande, and her dresses appeared in the television series “Grey’s Anatomy” and the films “Runaway Bride,” “27 Dresses” and “The Hangover.”

The wedding dress designer Mark Ingram was quoted in Women’s Wear Daily as calling Ms. Aberra “the inventor of the modern wedding dress.”

Her fashion enterprise began with one wedding gown: her own.

After arriving in the United States to attend college in Vermont, she had moved to New York and was attending the Fashion Institute of Technology in Manhattan in 1985 and planning her wedding when she found she could not find a dress she liked among the confectionary-like options available.

She realized, she said, that she must not be the only woman in New York who wanted something simple to wear.

“Everything was overdone!” Ms. Aberra said in a 2004 interview for the website Ladies Who Launch. “You really have to look back at magazines from the ‘80s to understand.”

So she made her own dress — just as she had done as a child in Ethiopia.

The following year, she and her husband maxed out their credit cards, bought a sewing machine and turned their loft apartment into a design studio. Then they put an ad in Modern Bride magazine announcing their made-to-order business and waited for the calls to come in.

They did, many from professional women, and Ms. Aberra began fitting and making each dress at her home.

Ms. Aberra introduced her first wholesale collection in the early 1990s and showed it to the owners of Kleinfeld Bridal, an emporium then located in Brooklyn that drew customers from around the world. Hedda Kleinfeld Schachter purchased it on the spot.

During Fashion Week in New York, Ms. Aberra would turn her apartment into a runway, laying down a long carpet and inviting fashion buyers from around the country. Models changed in her bedroom.

She opened her Madison Avenue store in 1997 and expanded it to include more dramatic and glamorous designs under the Kenneth Pool label in 2003.

“The most important thing to focus on in the beginning is the silhouette,” Ms. Aberra wrote in 2012 on “Ask Amsale,” her advice column for brides on what is now the HuffPost website. “If you tackle the shape first and detail later, you’ll find it easier to focus, and you won’t waste time getting hung up on a bow or a brooch.”

Ms. Aberra was born on March 1, 1954, in Addis Ababa, Ethiopia, to Aberra Moltot, a government minister, and Tsadale Assamnew, a homemaker. As a child, she made her own clothes and would get in trouble for cutting them up to make dresses for her dolls, too.

She was 19 when she traveled to Poultney, Vt., to attend Green Mountain College, where she studied commercial art.

“She shows up to a college on the side of a mountain in Vermont that’s covered in snow, and she didn’t even bring a coat,” Mr. Brown said.

In 1974, after she had moved to the United States, her father was imprisoned amid political turmoil in Ethiopia, and her parents could no longer pay Ms. Aberra’s tuition. Soon she dropped out of college and moved to Boston, where there was a large Ethiopian community and where her stepsister lived. She found a series of service jobs, including taking orders at a fast-food restaurant.

Throughout, she made clothing for herself and her friends.

“Whether it was a jumpsuit, whether it was a skirt, it had a level of drama and level of coolness without anything garish,” said Mr. Brown, who became Amsale’s chief executive.

Ms. Aberra eventually paid her way through Boston State College, graduating with a degree in political science. She was working in a campus coffee shop at Harvard University when she met Mr. Brown, who was a law student there at the time.

Moving with him to New York, she enrolled at the Fashion Institute of Technology and majored in sportswear.

After founding her business Ms. Aberra became a leader in New York’s black business community. She was twice included on Ebony Magazine’s “Power 150” list of influential African Americans and received a legacy award at the 2012 Black Enterprise Women of Power Summit.

“She always felt that the African-American community had adopted her and supported her,” Mr. Brown said.

Ms. Aberra served on the board of the Ethiopian Children’s Fund and was a member of the Council of Fashion Designers of America and a trustee of the Fashion Institute of Technology.

“Amsale was a designer whose work exuded an elegance that emanated from her deep reservoir of grace and humility,” Dr. Joyce F. Brown, the institute’s president, said in a statement.

In addition to her husband, Ms. Aberra is survived by her father; her daughter, Rachel Amsale Brown; and a half sister, Aster Yilma.

The company’s launch of its spring 2019 bridal collection is scheduled for April 13 and will go on as planned, Mr. Brown said. Ms. Aberra had requested that.