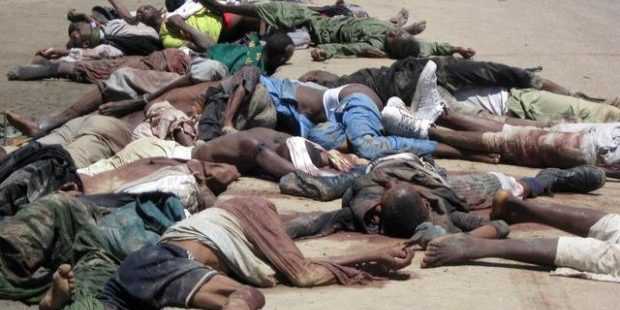 The Amnesty International (AI) yesterday said more than 1,500 people were killed in first three months of this year in the Northeast as a result of Boko Haram insurgency.

It said more than half of the killings were carried out by members of Boko Haram, including scores of school children.

The organisation said the situation has escalated into a non-international armed conflict with all parties allegedly violating international humanitarian law.

It however expressed concerns that civilians are “paying a heavy price as the cycle of violations and reprisals gather momentum.”

The AI made the disclosures in a fact-sheet by its Research and Advocacy Director for Africa Netsanet Belay.

The document gave the details of pattern of killings by Boko Haram and alleged extra-judicial (summary) executions by Nigerian security forces.

The organisation queried the alleged killings of over 600 people, mostly detainees, during the 14 attack on Giwa Military Barracks in Maiduguri.

In spite of the persistent denials by the Defence Headquarters, the AI alleged that the over 600 detainees were extra-judicially executed in various locations across Maiduguri.

It claimed that since January 2014, approximately 150 dead bodies had been brought by the military to the State Specialist hospital mortuary.

Belay said: “An increase in attacks by Boko Haram and uncontrolled reprisals by Nigeria’s security forces had seen the death toll in Northeast Nigeria rise to at least 1,500 people, more than half of whom are civilians, in the first three months of 2014.

“More than 1,500 deaths in three months indicate an alarming deterioration in the situation. The international community cannot continue ver to look the other way in the face of extrajudicial executions, attacks on civilians and other crimes under international law being committed on a mass scale. Civilians are paying a heavyprice as the cycle of violations and reprisals gather momentum.

“The escalation of violence in Northeastern Nigeria in 2014 has developed into a situation of non-international armed conflict in which all parties are violating international humanitarian law.

“We urge the international community to ensure prompt, independent investigations into acts that may constitute war crimes and crimes against humanity.”

The organisation, which gave the details if the death toll, however described the killings by Boko Haram as “truly shocking.”

Belay added: “More than half of the killings have been carried out by members of the Islamist armed group Boko Haram, including scores of schoolchildren who have been the victims of deliberate attacks.

“The scale of atrocities carried out by Boko Haram is truly shocking creating a climate of fear and insecurity.

“But this cannot be used to justify the brutality of the response that is clearly being meted out by the Nigerian security forces.

The Amnesty International faulted the alleged killings of over 600 people, mostly detainees, during the 14 attack on Giwa Military Barracks in Maiduguri.

It also described the attacks on Giwa Barracks in Maiduguri on March 14 as a “tipping point”.

Belay said: “Amnesty International has documented the killings carried out in January, February and March 2014 by both Boko Haram and the Nigerian Security Forces. It highlights 14 March as a tipping point when the security forces unleashed a brutal crackdown on former detainees.

“Amnesty International has pieced together a partial timeline of events following the 14 March attack in Maiduguri.

“The evidence is based on interviews with residents, lawyers, human rights campaigners, and hospital staff across the city as well as satellite imagery showing three possible mass graves in one area of Maiduguri.

“Amongst the testimony gathered by Amnesty International were the voices of witnesses who described what happened when the military found 56 of those who had escaped from the Giwa barracks.

“The former detainees were in a classroom. They started screaming ‘we are not Boko Haram. We are detainees!’ My neighbours and I saw the soldiers take the men to a place called ‘no man’s land,’ behind the University of Maiduguri. We watched as the soldiers opened fire killing all 56. They were killed in front of us. All of them.”

“Other eyewitnesses in Jiddari Polo, also in Maiduguri, described how members of the “Civilian Joint Task Force” rounded up freed prisoners and handed them to soldiers. More than 190 people were executed, many of whom were too frail to run.

The AI demanded independent probe of alleged acts which amounted to war crimes in the battle against insurgency.

Belay said: “Given Nigeria’s apparent unwillingness and inability to investigate and prosecute perpetrators of these crimes, Amnesty International is calling on the African Comission and the United Nations to assist Nigeria in investigating acts that may amount to war crimes and crimes against humanity committed by both Boko Haram and the Nigerian security forces in north-eastern Nigeria.

“The summary killing of these detainees amount to extrajudicial executions and are crimes under international law. These killings follow an entrenched pattern of deaths in custody of detainees held in relation to the situation in the northeast.

“The international community, and in particular the African Commission on Human and People’s Rights and the UN Human Rights Council, must, as a matter of urgency, ensure that a thorough, impartial and transparent investigation is conducted into these allegations of war crimes and crimes against humanity in Nigeria.”

“Amnesty International is also calling on the African Union (AU), the Economic Community of West African States (ECOWAS) and the African Union’s Peace and Security Council to assess immediately the conflict situation in North-Eastern Nigeria and provide full and effective support to end these acts of violence against civilians.

“It must also strongly condemn the on-going war crimes and crimes against humanity committed by all parties to the conflict.

“As Nigeria assumes the chairmanship of the African Union’s Peace and Security Council next month, the AU needs to critically ask itself how far its member States are living up to their commitment to uphold the principles of the African Union and respect for rule of law and human rights.”