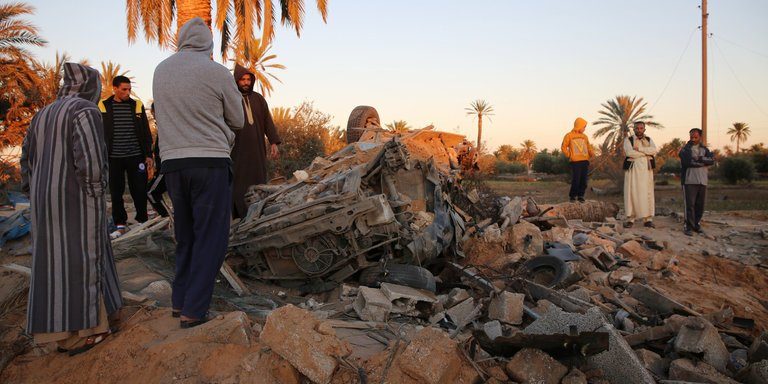 An American military drone strike over the weekend in southern Libya killed a top recruiter and logistics specialist for Al Qaeda’s branch in northwest Africa, the Pentagon said on Wednesday, and a senior military official warned of more attacks on extremists there.

The military’s Africa Command said in a statement that the attack killed two militants, one of whom was identified as Musa Abu Dawud, a high-ranking official in Al Qaeda in the Islamic Maghreb, known as AQIM.

Mr. Dawud trained Qaeda recruits in Libya for strike operations in the region, and provided logistics, money and weapons that enabled the group to threaten and attack American and Western interests, the military statement said.

Until now, the Pentagon had focused its counterterrorism strikes in Libya — eight since President Trump took office — almost exclusively on Islamic State fighters and operatives farther north. Over several months in 2016, the military conducted nearly 500 airstrikes in the coastal city of Surt to destroy the Islamic State’s stronghold there.

The missile fired by the American drone on Saturday was the first in southern Libya. It struck a house in Ubari, 435 miles south of Tripoli, in the country’s southwest, a notorious haven for a deadly mix of Al Qaeda and other extremist groups that also operate in the Sahel region of Niger, Chad, Mali and Algeria.

The area is also close to major oil fields that were crippled by violent ethnic feuding in 2015.

“I wouldn’t say this is the beginning of a wider campaign,” Col. Mark Cheadle, the Africa Command’s chief spokesman, said in an email. But, he added, “If we find targets we can strike, and it is appropriate to do so, I think we would certainly consider the option.”

Colonel Cheadle said that Mr. Dawud was “a significant ‘fixer’ for Al Qaeda.” Other American military officials said that Mr. Dawud had been under surveillance for a significant period of time but gave no details about how he was tracked to a house and killed with another Qaeda fighter. The command said that no civilians were believed to have been killed in the attack.

Pictures in Libyan news outlets showed a mutilated corpse lying in the rubble of a house and a pair of shrapnel-ridden vehicles nearby. Residents were quoted as saying that the house had been frequented by foreigners.

The strike came as the Trump administration has been reassessing the American military commitment in North and West Africa after an ambush in Niger in October that killed four American soldiers. The Pentagon has been preparing to fly armed drone missions from Niger’s capital, Niamey, a step that diplomats and analysts say could further widen the Pentagon’s shadow war in that part of the continent.

The American military is also building a $100 million drone base in Agadez, north of Niamey, that is set to begin operations this year.

In a sign of how the Pentagon has sought to obscure its operations in Libya and other parts of northwestern Africa, the Africa Command initially did not announce the strike. It responded to questions from The New York Times late Saturday with a terse statement after news reports about the strike circulated in Libya.

The command on Wednesday identified Mr. Dawud as the target of the attack and confirmed his death after “operational reporting” and an analysis of the strike’s damage was complete.

Questions about whether the American military, under the Trump administration, is seeking to blur the expanding scope of operations in Africa were raised this month when it was revealed that the United States had carried out four airstrikes in Libya from September to January that the Africa Command did not disclose at the time.

“Al Qaeda and other terrorist groups, such as ISIS, have taken advantage of undergoverned spaces in Libya to establish sanctuaries for plotting, inspiring and directing terror attacks,” the statement said. “Left unaddressed, these organizations could continue to inflict casualties on the civilian populations and security forces, and plot attacks against U.S. citizens and allied interests in the region.”