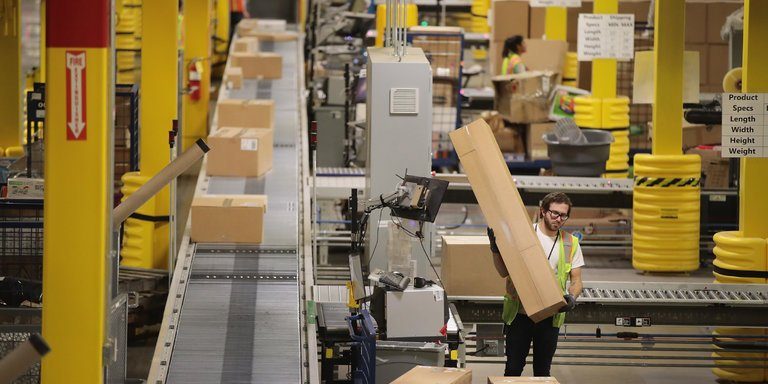 SEATTLE — Jeff Bezos, Amazon’s founder and chief executive, long ago figured out how to keep Amazon’s sales figures shooting skyward. Now he is doing the same with profit.

The company, which once seemed to have only a passing interest in turning a profit, said its net income for the first quarter more than doubled. Although Amazon is best known as an internet shopping destination, its cloud computing and advertising businesses were big contributors to the jump in profit.

Mr. Bezos singled out the performance of the company’s cloud computing business — known as Amazon Web Services, or A.W.S. — referring in a statement to a “remarkable acceleration” in growth in the segment for a second consecutive quarter.

Amazon often boasts of its commitment to lowering prices — part of the reason its profits have been so limited until now — but on Thursday it announced a price hike for one of its most important offerings. The company said it was raising the price of its Prime membership service 20 percent, to $119 from $99. Prime memberships include two-day shipping at no extra cost, a video streaming service and other benefits.

The average estimate of financial analysts, compiled by Thomson Reuters, was for revenue of $49.87 billion and earnings of $1.27 a share.

“This was an unusually strong quarter for Amazon, where results came in both better for revenue and profits across the board,” said Mark Mahaney, an analyst at RBC Capital Markets.

Like Facebook, which has faced a grilling in Congress over its data protection practices, Amazon has faced criticism in Washington. President Trump has regularly slammed the company, saying it was killing jobs and not collecting enough taxes.

But as with Facebook’s users, Amazon’s customers have apparently not been swayed by criticism of politicians, though many of Mr. Trump’s attacks happened after the end of the quarter.

Amazon’s revenue received a big lift from the company’s acquisition of Whole Foods Markets last year. The company’s physical stores business, most of which is from Whole Foods, added $4.26 billion in revenue for the quarter.

Revenue from A.W.S., meanwhile, rose 49 percent to $5.44 billion from the same period a year earlier.

That increase is larger that what the A.W.S. business was seeing just a few quarters ago. It is unusual to see revenue growth increase significantly at Amazon’s size and in a hypercompetitive market, and it seems to have prompted Mr. Bezos to single out the business in his statement.

Mr. Mahaney, the RBC analyst, said, “That’s rare to see him say something like that.”

The increase in the cost of Prime memberships came shortly after Mr. Bezos announced, in the company’s annual shareholder letter, that Amazon had more than 100 million Prime subscribers globally. During the first quarter, revenue from subscription services, including Prime, jumped 60 percent to $3.1 billion.

Amazon said the price on Prime will go up on May 11 for new members, and starting June 16 for renewals of membership for existing members. The company said the increase, the first for its annual plan in four years, was the result of significantly increased costs for the service.

Those include the billions of dollars that Amazon has poured into financing new television shows and movies which have been added to its video streaming service. On Thursday, it announced with the National Football League a renewed agreement for Amazon to exclusively stream Thursday night football games to Prime subscribers.

In a call with financial analysts, Brian Olsavsky, Amazon’s chief financial officer, said that four years ago, Prime members could receive free two-day shipping on about 20 million products from Amazon. Now that figure is 100 million.

“There’s all kinds of new features that we’ve continually added to the Prime program,” Mr. Olsavsky said. “It’s much different than it was in 2014.”